Seventy-five years ago Wednesday, Fred Reidenbach was aboard a Navy patrol craft loaded with radio gear, helping to coordinate the... 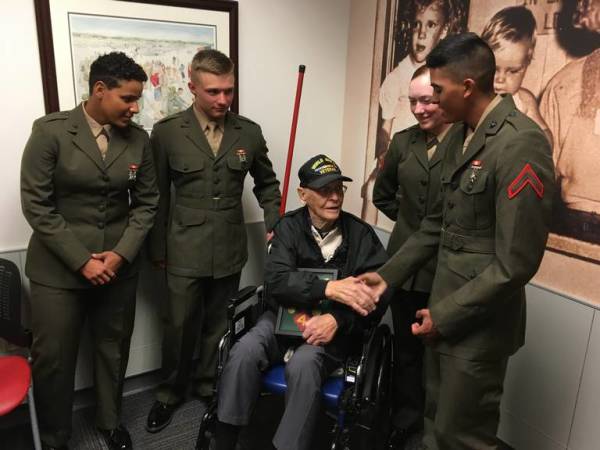 Seventy-five years ago Wednesday, Fred Reidenbach was aboard a Navy patrol craft loaded with radio gear, helping to coordinate the landing at Iwo Jima, a volcanic island the U.S. military hoped to use as a staging area for the eventual invasion of Japan.

Reidenbach was a 22-year-old sergeant with the 4th Marine Division from Rochester, New York, and recalls that it was cold that day. The Marines were issued sweaters, heavy socks and 2.5 ounces of brandy to steel them for the task ahead: dislodging 21,000 Japanese soldiers from heavily fortified bunkers and tunnels. Reidenbach wasn't a drinker but didn't have trouble finding someone to take his brandy.

“I passed it on to somebody who liked it better than me,” he said.

Reidenbach, now 97 and living with his daughter in Fuquay-Varina, was speaking from a wheelchair in the children's area of the USO center at Raleigh-Durham International Airport. The USO arranged the visit, on the anniversary of the first day of the five-week battle, so the newest Marines could meet someone who was present at one of the bloodiest and proudest times in Marine Corps history. Nearly 7,000 U.S. service members died at Iwo Jima, and more than 19,000 were injured.

Dozens of young men and women who just finished their 13-week basic training in San Diego or Parris Island, South Carolina, passed through the USO center on Wednesday, on their way to Camp Lejeune for the next phase of their training. The young Marines shook Reidenbach's hand and posed for pictures and said it was an honor to meet him.

Jessica Larsen of Kent, Washington, graduated from basic training in front of the Iwo Jima monument at Parris Island and has read about the battle. But this was the first time she'd ever met someone who was there.

“You forget there are real people who go through that and fight our battles for us,” Larsen said.

Reidenbach also did his basic training at Parris Island, and told Larsen it was a “very busy place” at the time.

“We didn't know where we were headed,” he told her. “We took what they gave us. Not always too cheerfully, but we did it.”

Standing next to Larsen was Trevor Kicheloe of Odessa, Texas, who did his basic training at Camp Pendleton in Southern California. As Reidenbach shook Kicheloe's hand, he wished him luck.

“Well, if they need me, I'll be there,” Kicheloe replied.

Reidenbach went ashore at Iwo Jima on the second day and says the fine, black volcanic ash was nothing like the sand that Hollywood portrayed later. He spent more than two weeks on the island, and as on the Marshall Islands, Saipan and Tinian before that, he managed to avoid getting injured.

“I was shot at a few times,” he said. “I escaped a couple of close calls.”

After Iwo Jima, Reidenbach said he was “packed and ready to hit Japan” when the atomic bombs brought World War II to an end. In all, he spent three years and two months in the Marine Corps. He kept in touch with his closest friends for a while, but gradually they lost touch. He's not sure if anyone he knew during his time in service is still alive.

Reidenbach said he enlisted in the Marine Corps before he could be drafted, so he could choose the branch of the service. He's proud to be a Marine and said he admires the young men and women who are joining now. But in retrospect, he says he might have chosen differently.

“If I had to do it over again, I'd have enlisted in the Navy, where you get three squares a day and a place to sleep,” he said. “That we didn't have.”