The World War II battle claimed 6,821 American dead and was burned into the nation's memory by the image of valor and victory captured in the flag raising atop Mount Suribachi. 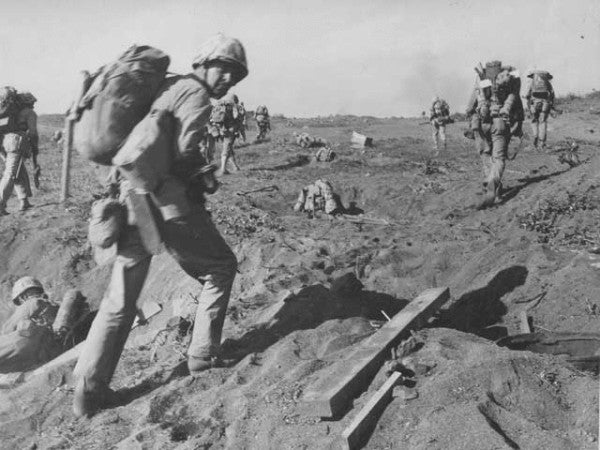 Addo Bonetti of Torrington told the story of a sergeant's slow death 75 years ago on the island of Iwo Jima.

Frank Peters of Windsor recalled four Marines who were gone in an instant, and John Ray of Bloomfield recalled a young officer paralyzed by the horrors he witnessed on the bomb-blasted rock.

The three U.S. Marine Corps veterans are among the shrinking band of Iwo Jima survivors in the state and nation. The World War II battle claimed 6,821 American dead, including 100 Connecticut men, and was burned into the nation's memory by the image of valor and victory captured in the flag raising atop Mount Suribachi.

To mark the battle's 75th anniversary, the Connecticut-based Iwo Jima Survivors Association has organized events on Feb. 22 and 23. Rear Admiral Gregory N. Todd, chaplain of the Marine Corps, is among the special guests invited to the Feb. 23 ceremony at the Iwo Jima Memorial in New Britain.

Connecticut has a particularly close tie to the battle's survivors. State veterans raised money for a statue of the flag-raising, which was installed in New Britain in 1995. Bearing the names of the Connecticut men who were killed, the memorial's statue is similar to the better-known U.S. Marine Corps War Memorial in Virginia.

Anniversary events are to include a display of battle memorabilia, showings of documentary films and a gathering that offers a chance to speak with Iwo Jima survivors. The Newington Fire Department, Central Connecticut State University and other organizations are helping to make this the biggest survivors' reunion in years, event organizers said.

Harry Rosenfeld, 95, of West Hartford, was a sailor aboard the USS Nevada, which was salvaged after sustaining heavy damage in the Japanese attack on Pearl Harbor. The battleship was among hundreds of U.S. Navy vessels assembled around the Pacific island of Iwo Jima on Feb. 16 for a pre-invasion ship-to-shore battering that lasted three days.

Tons of shells slammed into the hump of rock and sand about the size of Block Island. The fire and smoke and noise, Rosenfeld said, was dramatic. Peters said he and other Marines wondered if anything could survive such an epic pounding – if the island itself would even be there after the veil of smoke lifted.

“We said that damn thing is going to sink,” he said.

Corsair fighter looses its load of rocket projectiles on a run against a Jap stronghold in Okinawa.” In the lower background is the smoke of battle as Marine units move in to follow up with a Sunday punch.” Lt. David D. Duncan, ca. June 1945. 127-GR-97-126420. National Archives Identifier: 532375

Peters, Bonetti, and Ray were among the 70,000 Marines who clambered into landing craft and started for the beaches on Feb. 19. Along with Army and Navy shore personnel, the total expeditionary force was about 111,300. The Japanese numbered about 21,000.

The island's airfields were the big draw for U.S. strategists. The Japanese were using Iwo not only as an airbase but also as a station to warn forces to the north of American bombing raids from the Marianas. The big new stick in the American air arsenal was the B-29 Superfortress, which could carry four tons of bombs on long-range sorties. Missions from the Marianas to Tokyo went straight over Iwo Jima, and U.S. planners decided the island must be taken to serve as a refuge for the monster bombers and a base for fighter escorts. Iwo, as one historian noted, was like a giant aircraft carrier in just the right place.

The first Marines ashore encountered little resistance. That was Japanese commander Lt. Gen. Tadamichi Kuribayashi's plan _ let the Americans fill the slaughter pen and then unleash. His troops were dug into a lacework of tunnels and gun emplacements and most had survived the pre-invasion bombing,

When the invaders were 200 to 300 yards inland, enemy machine guns sputtered and the air filled with steel. From the north and from the island's southern highpoint, 550-foot Mount Suribachi, shells and small arms fire rained on the Marines.

The long, hard fight was on.

He remembered being pinned down behind a boulder with other Marines. A sergeant raised his head to check out a sniper's position and was shot between the eyes, Bonetti said. Inexplicably still alive, the man groaned for 20 minutes before dying. Bonetti, who had never smoked before, said he burned two cigarettes, one after the other.

Marines cheered the flag-raising on Suribachi, but that was only the fourth day of a 36-day battle. Knowing the energy and material might he was facing, Kuribayashi had converted Iwo Jima into an intricate fortress.

The Japanese had good reason for such a solid defense. Iwo, 660 miles from Tokyo, was one of the last links in the Pacific island-hopping campaign that was drawing ever closer to the big home islands. “The Courageous Battle Vow'' of the defenders read in part, “We shall grasp bombs, charge the enemy tanks, and destroy them. We shall infiltrate into the midst of the enemy and annihilate them. With every salvo we will, without fail, kill the enemy.''

Bonetti, now 93, was wounded by a grenade blast on March 12. Lying in a bomb crater, he felt blood running over his back and legs.

Ray, 94, was a field radio operator, relaying target locations for airstrikes. The Darien native joined the Marines in 1943 at age 17. His mother had to give her permission.

Ray had served in the battle of Saipan and was attached to the 5th Marine Division's headquarters during the Iwo Jima invasion. He came ashore at the wheel of a jeep loaded onto a landing craft.

“I looked up and said, 'Holy smokes! There's somebody shooting at us.' “

Some men could not handle the concentration of killing, the awful screams of the wounded, the nighttime taunting of Japanese soldiers who had learned some English. Ray remembered one Marine lieutenant standing at attention after the rest of his unit had been dismissed. Stunned into stillness, he had to be carried away.

Peters, 95, who also had fought on Saipan, said he also remembered guys losing their grip. At a mortar position, one of the tubes malfunctioned and the explosion instantly killed four Marines. Two men who were close buddies of the dead Marines could not function and had to be taken off the line, Peters said.

The worst part for him was loading dead Marines into trucks.

“I'd look and say, 'I played cards with that guy,' ” he said, his eyes welling with tears.

After the war, Peters worked for Emhart for 35 years, most of that time as a chauffeur for company executives. He married and raised four children. He wears his “Fighting Fourth” Marine Division cap with pride.

Ray worked for People's Bank as a residential appraiser. He lives in Bloomfield with Barbara, his wife of 63 years. The couple raised four children.

Rosenfeld, a New York City native, has lived in West Hartford for about 70 years. He worked as a certified public accountant. He married and raised three children.

Bonetti recovered from his wounds and likely would have been among the Marines assigned to invade Japan, but then the bombs were dropped on Hiroshima and Nagasaki. He returned to Connecticut and made his living as a bricklayer. The widower has one stepson.

Free events on Feb. 22 at the Newington Fire Department Station 1, 1485 Main St., are set to start at 11 a.m. and are to include a presentation about the battle and a documentary about the experiences of U.S, Marine Samuel Bernstein, “In the Shadow of Suribachi: Sammy's Story.” Refreshments will be served. Parking will be available behind the building.

On Feb. 23, ceremonies at the Iwo Jima Memorial – on the east side of the Central Connecticut State University campus off Ella Grasso Boulevard (Iwo Jima Way, Exit 29 off Route 9) – are scheduled to start at 10:30 a.m. The program is free and open to the public. After the ceremonies, people are invited to the Newington fire house to talk with Iwo Jima survivors and view memorabilia of the battle. Refreshments will be served.

The Iwo Jima Survivors are seeking donations of money and food for the programs. For more information, call 860-810-8736, or email sosiwojima@yahoo.com.