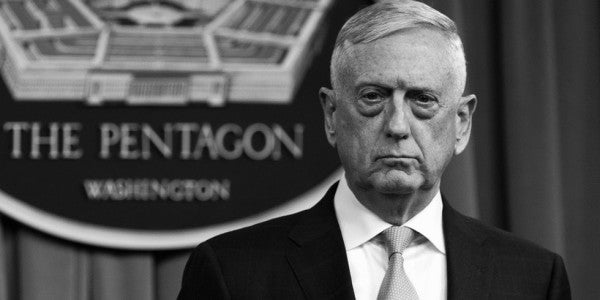 Phil Lemley hopes his neighbors will help push a grassroots campaign to encourage the now-former Secretary of Defense to run for public office.

And he's printed up 10 campaign yard signs to start the conversation.

Lemley said he was “devastated” in December when Mattis resigned as the 26th Secretary of Defense over policy differences with President Donald Trump.

Lemley unsuccessfully ran as a Republican for a seat in the state House last year, but his Mattis signs don't mention a political party. Mattis' ex-boss famously called him “sort of a Democrat” in a 60 Minutes interview last fall.

One Mattis sign went in Lemley's yard. Another in his neighbor's — former State Rep. Larry Haler.

He passed a third along to the Mattis family and gave more to curious passersby who knocked at his door.

Lemley said he has two or three left. He would be thrilled to order more if it helps build a movement to draft Mattis to run for something.

“If we could get a grassroots effort started, I would do anything to make this happen,” he said. “Let's twist his arm.”

No word from Mattis

Mattis has been silent on the presidential rumblings emanating from his hometown. Lemley confirmed he did not get permission and hasn't heard anything one way or the other.

It's unclear if Mattis has visited the Tri-Cities since New Years, when he left office, and the Herald failed to reach him this week about Lemley's hopes for him.

Lemley, a former Marine who flies a service flag outside his home, says he's a long time fan of Mattis.

Mattis, 69 was born in Pullman but raised in Richland, where he graduated from Columbia High School (now Richland). He attended Central Washington University, where he launched a highly successful 40-plus year military career.

Lemley became friendly with Mattis after he arranged for him to speak during a Rotary Club program.

He'd reached out to Mattis through the military. He only succeeded in connecting after he had a chance encounter with the general's mother.

Lemley was door belling for one of his own political campaigns when he met her. He mentioned his interest in having Mattis visit the service club.

Two weeks later, Mattis got in touch to accept, hailing Lemley as a fellow Marine.

“All I had to do was talk to his mother,” Lemley said.

Mattis is legendary in military circles for his interest in veterans and issues.

“Every Marine there is loves this man and worships the ground he walks on,” Lemley said.

Signs of a political nature are broadly protected under the First Amendment.

Lemley said he is careful in his personal campaigns for city council and more recently, state Legislature, to comply with the city code that requires political campaigns to remove yard signs within 10 days after an election.

But the code is silent on how early you can put up your signs.

WATCH NEXT: The 5 Best Mattis Quotes Of All Time