A commissioned officer at Marine Corps Air Station Miramar is accused of terrorizing his wife, bedding mistresses across three states... 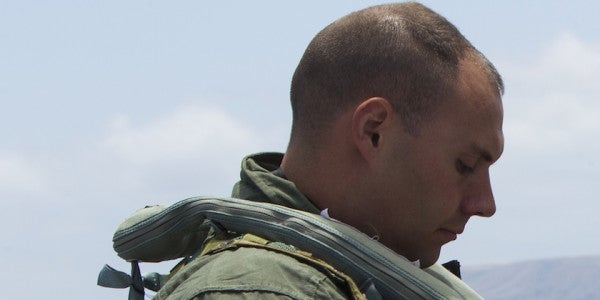 A commissioned officer at Marine Corps Air Station Miramar is accused of terrorizing his wife, bedding mistresses across three states and then trying to cover it all up by blackmail and threats.

In a series of eight assaults allegedly committed in late 2015 in or near San Diego, Capt. Jameson P. Hustek twice bent the wrist of his wife, twice lifted her off the ground and suspended her in the air, twice struck her head and once placed a knife near her neck and hit her arm, according to a charge sheet prepared by the Corps.

Between October 2012 and mid-September 2015, he also allegedly engaged in a string of sexual relationships with individuals other than his wife, including a monthlong 2014 affair in Nashville with a woman in such a manner that was “unbecoming of an officer and a gentleman.”

Because members of the armed forces are held to a high ethical standard, adultery is a military crime. Prosecutors lodge charges against suspects when the alleged misconduct is prejudicial to good order and discipline or brings discredit upon the services.

Prosecutors contend that Hustek, 34, tried to cover up his liaisons and the abuse of his wife, 29.

On Dec. 5, 2015, he communicated to an unnamed witness that he had forwarded a message to himself “to keep as leverage in case I need it” in case he or she tried to “do something crazy,” according to charge sheet documents.

The next day, he allegedly threatened to harm a witness — the name was redacted by Marine officials — if his actions were reported to commanders.

And then on Christmas Eve of 2015, he allegedly tried to get an unnamed witness to cooperate with him, promising “tons of money from me.”

“Also no going around telling people I am a slime bag. If you do either, it’s not going to go well for you,” he allegedly said, according to records released to The San Diego Union-Tribune under the federal Freedom of Information Act.

Formerly from Connecticut, Hustek was informed of the charges against him on Oct. 2, the records show.

On Nov. 20, Maj. Gen. Mark “Notso” Wise — commander of the 3rd Marine Aircraft Wing — convened a court-martial for him but officials have not indicated when the trial will begin.

“We’re contesting the charges and will continue to vigorously contest them going forward,” he said.

Hustek remains free on his own recognizance, according to his criminal records. He remains on active duty.

Allegations of spousal abuse have long dogged the military.

Released in May, the Pentagon’s annual study on domestic abuse showed that the number of incidents and victims reported to the military’s Family Advocacy Program ticked up in 2016 — the most recent year available — highlighting a pattern of incremental growth since 2009.

The Pentagon counted nine spouse or intimate partner fatalities in 2016. Three of the victims and an equal number of offenders already had been reported to the program.

The typical victim is a female spouse. Slightly more than half also serve in the military.

While the typical offender also is in the military, reported cases of officer offenders remain relatively rare. Only about 1 percent of them are junior officers, according to the Pentagon data.

Details about Hustek’s case emerged only because of a series of federal records requests and appeals by the Union-Tribune over the past five months.

Even a list of court-martial cases that was supposed to appear on an online trial docket was denied to the Union-Tribune before Navy officials overturned that decision following a formal appeal by the newspaper to an administrative court at the Navy.

After that victory and two other successful appeals, the Union-Tribune awaits decisions in five other cases filed against the Naval Criminal Investigative Service, Marine Corps Recruit Depot and several other commands that refused to release records tied to three suspicious deaths at Camp Pendleton as well as multiple rape, battery and criminal cases tied to the troops.