When Misa Matsushima joined the Japan Air Self Defense Force, she was one of 13,707 women service members who made... 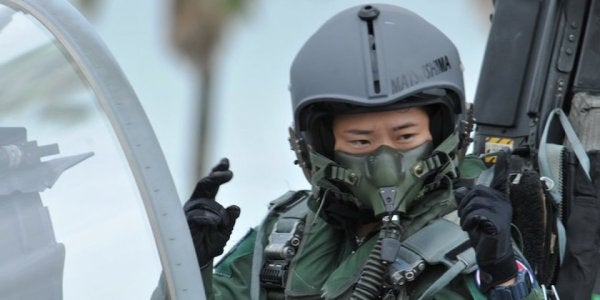 When Misa Matsushima joined the Japan Air Self Defense Force, she was one of 13,707 women service members who made up just 6.1% of all Japanese troops.

For Matsushima, the achievement was inspired by the movie that made the fighter jock a mainstream figure.

“Ever since I saw the movie Top Gun when I was in primary school, I have always admired fighter jet pilots,” Matsushima told reporters on Thursday.

“As the first female (fighter) pilot, I will open the way. I would like to work hard to meet people's expectations and show my gratitude to people who have been supporting me,” she added. “I want to become a full-fledged pilot, no different from men, as soon as possible.”

Originally from Yokohama in eastern Japan, Matsushima graduated from the National Defense Academy in 2014. After that she got her pilot's license and moved to fighter-pilot training with the JASDF.

Matsushima completed the fighter-pilot course alongside five men and is expected to start flying F-15s in six months to a year. The F-15J that the JASDF flies is a twin-engine fighter designed for air-to-air combat. It can hit a top speed of Mach 2.5 — nearly 2,000 mph.

She has to undergo further training to qualify to scramble the jet to intercept aircraft that enter Japanese airspace. She will be stationed at Nyutabaru air base on the eastern coast of Kyushu, the southernmost of Japan's four main islands.

Her appointment comes amid a broader move toward gender equality in Japan's armed forces, which are also trying to grow their ranks.

Japan's Air Self Defense Force opened many of its positions to women in 1993, but they were still barred from fighter and reconnaissance aircraft until 2015, when the prohibition was lifted as part of an effort to increase the number of women in the service. Matsushima had planned to fly transport planes before the restriction was lifted.

Prime Minister Shinzo Abe pledged in 2013 to empower more women to join the workforce, a landmark move for a leader in a society that has long been male-dominated.

This spring, Japan's Defense Ministry began several initiatives to boost the number of women in the military from the current 6.1% of the 228,000-strong force to 9% by 2030. Women are 16% of the U.S. military's roughly 1.29 million enlisted personnel.

Other women have achieved similar feats. Ryoko Azuma became the first woman to command a warship squadron earlier this year, a decade after Tokyo lifted a ban on women serving on warships. Women are still barred from submarines.

But Japan remains profoundly unequal for women. The country slid three spots in the World Economic Forum's global gender-equality rankings for 2017, falling from 111 to 114 out of 144 countries. That drop was driven largely by the low proportion of women lawmakers and Cabinet ministers.

Matsushima's accomplishment comes amid a broader push by the hawkish Abe government to grow the military. The Defense Ministry said earlier this month that it would raise the maximum age for military recruits from 26 to 32 to expand the pool of potential soldiers that has shrunk due to the country's low birth rates and aging population.