As tensions reach a boiling point between North Korea, the U.S. and the North's neighbors, Japan's government has issued a guide... 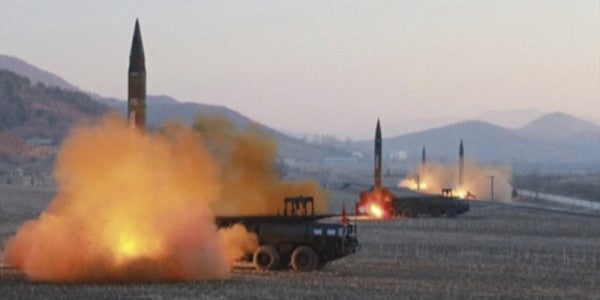 As tensions reach a boiling point between North Korea, the U.S. and the North's neighbors, Japan's government has issued a guide for its citizens on how to survive a missile attack that would take less than 10 minutes to hit Japan, The Washington Post reports.

The guide instructs people to keep calm, keep roads clear, and maintain communication with the outside world through radio or TV in the event of a nuclear, chemical, or biological attack.

It recommends that in the event of a nuclear explosion, people not look at the flash, which could be blinding, and have the least possible amount of skin exposed to the blast of radiation.

North Korea stunned experts by displaying a wide range of new or modified missile types at its April 15 military parade in Pyongyang.

The Kim regime has shown steady improvement in its missile program and remains the only country to test nuclear devices in the 21st century. Experts warn that it could be on the verge of another nuclear device.

Its latest round of missile tests and provocations seems to have worried the people of Japan, where sales of nuclear shelters and air purifiers have skyrocketed.

Japanese guided-missile destroyers joined the USS Carl Vinson aircraft carrier strike group off the Korean Peninsula on Tuesday, as did the USS Michigan, a special-operations and guided-missile nuclear-powered submarine. Tuesday also marked a military celebration in North Korea on the 85th anniversary of the founding of the country's army.

Though Japan would have virtually no defense against a surprise nuclear attack, experts contacted by Business Insider maintain that a first strike from North Korea seems incredibly unlikely, as the Kim regime would face quick retaliation from a much more certain nuclear power, the U.S..

On Wednesday, every U.S. senator was invited to a briefing on North Korea at the White House.