With the Trump administration planning to move 1,400 migrant children to this fortified Army post later this summer, a small group of Japanese American World War II internment camp survivors came to the gates Saturday to make their opposition known 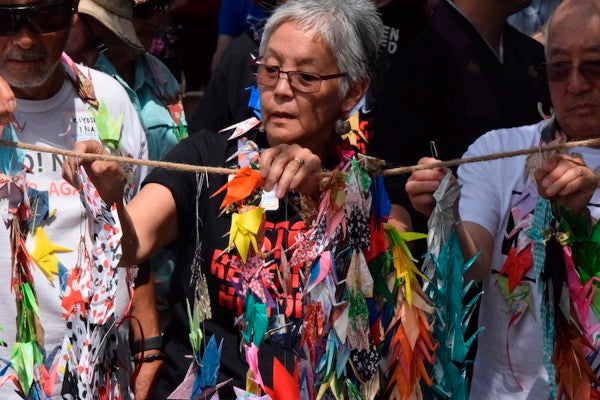 With the Trump administration planning to move 1,400 migrant children to this fortified Army post later this summer, a small group of Japanese American World War II internment camp survivors came to the gates Saturday to make their opposition known.

“We are here today to protest the repetition of history,” proclaimed camp survivor Satsuki Ina, 75, of San Francisco, one of about two dozen former internees and their descendants in attendance.

Met by uniformed military police, the protesters, some in their 80s, were told they did not have permission to congregate and might face arrest. “You need to move right now!” one of the officers shouted. “What don't you understand? It's English: Get out.”

But the survivors, carrying thousands of origami cranes as a symbol of solidarity, refused to leave until police from adjacent Lawton, Okla., arrived and let them speak. They then moved to a park where a crowd of about 200 was waiting.

Fort Sill has become a rallying point for Japanese Americans hoping to prevent migrant detention in what they call concentration camps, some built on the sites where they and their families were interned during World War II.

About 120,000 Japanese Americans, including families and children, were held at about a dozen camps during the war, some for years. Italian and German Americans were also held at the camps, built in remote Western outposts.

The Fort Sill post has now been designated an emergency shelter and is due to house children who have crossed the border from Mexico unaccompanied by adults. The post was last used to house migrant children in 2014, when it took in 1,861.

By law, the Border Patrol can hold such children for up to 72 hours and must then turn them over to Department of Health and Human Services officials, who place them in a network of 168 detention centers in 23 states.

Those lockups have filled, leading the agency to add a 2,400-bed facility in Homestead, Fla., as they have for the last two years. Officials plan to open the Fort Sill lockup this summer, and a 1,600-bed facility at a former oilfield worker housing complex in Carrizo Springs, Texas, later this month, near the site of the World War II internment camp of Crystal City.

In all, federal officials are opening tents and emergency lockups for an influx of nearly 600,000 migrants on the southern border this year, mostly families and children unaccompanied by adults, many from Central America.

U.S. Customs and Border Protection has crammed 15,000 migrants into temporary holding areas designed for only 4,000 people. On Friday, Texas Gov. Greg Abbott announced he was sending 1,000 National Guard troops to the border, doubling the number deployed, to assist at temporary holding areas. The Border Patrol has asked Congress for emergency funding to care for migrants, and a $4.5-billion House proposal is scheduled for a vote in the coming week.

During the Obama administration, Oklahoma's Republican leaders opposed lockups such as Fort Sill, but they are now defending them. Sens. James M. Inhofe and James Lankford joined Rep. Tom Cole, also of Oklahoma, to issue a joint statement calling the facility a necessary, temporary solution to the border crisis.

Lankford said in a separate statement last week that to liken the migrant detention centers to internment camps “is a false equivalency.”

“What happened then is not what is happening now,” the statement said. “… Every country now knows if you come into our country with a child, you will be released. It is our responsibility to ensure the security and safety of all the children coming into our country, and I have confidence that will be done properly at Fort Sill.”

Founded in 1869, the post has hosted a relocation camp for Native Americans, a boarding school for Native children separated from their families, and an internment camp for 700 Japanese American men in 1942. Saturday's crowd included former students from the boarding school and descendants of Fort Sill detainees.

Among those once interned at Fort Sillwas Kanesaburo Oshima, fatally shot by guards while scaling the post's fence. Ikeda, who interviewed Oshima's son, shared the story of Oshima — a 58-year-old businessman and father of 11 from Kona, Hawaii — with the group on Saturday.

“We need to be the allies for vulnerable communities today that Japanese Americans didn't have in 1942,” Ikeda said.

Paul Tomita and other internment camp survivors brought camp ID cards and other photos of themselves from when they were detained as children.

Tomita, 80, of Bellevue, Wash., was sent to a camp in Idaho when he was 3, and his family lived in a dusty tent there for about a year. He said Saturday that when he sees photographs of detained migrant children, he recognizes a sense of despair. “It's our responsibility to help,” he said.

In this June 17, 2014 file photo, a vehicle drives by a sign at Scott Gate, one of the entrances to Fort Sill, in Fort Sill, Okla. The federal government has chosen Fort Sill, a military base in Oklahoma, as the location for a new temporary shelter to house migrant children
(Associated Press/Sue Ogrocki)

Last week, Rep. Alexandria Ocasio-Cortez (D-N.Y.) faced a backlash when she called migrant detention facilities concentration camps and refused to back down.

“We are calling these camps what they are because they fit squarely in an academic consensus and definition,” she tweeted.

Critics say the term applies only to the Nazi death camps where millions of Jews were killed. But some descendants of Holocaust survivors who gathered at Fort Sill disagreed.

“They are the same kind of situation. Why aren't they identified as the same thing?” he said.

Karen Ishizuka, senior curator at Los Angeles' Japanese American National Museum, was forced in the 1990s to defend her use of the term for internment camps when she organized an exhibit called “America's Concentration Camps: Remembering the Japanese American Experience.”

“To call them anything else is to mitigate the enormity of the travesty,” she said before Saturday's protest.

Pressured in the '90s to change the name before the exhibit opened, museum officials met with representatives of Jewish groups, drafted a joint letter and successfully mounted the exhibit. “A concentration camp is a place where people are imprisoned not because of any crime they have committed, but simply because of who they are,” the 1998 statement said.

Museum officials sent Ishizuka to Fort Sill on Saturday and plan a second protest in front of the museum in Little Tokyo on Thursday.

Ishizuka said Saturday's protest had personal significance: Four of her uncles fought in the U.S. Army during World War II, even as other relatives were held at the camps.

“We all have the responsibility to stand up for justice,” she said.