"This was so horrific. Let's counter it with something equally as loving, caring and respectful." 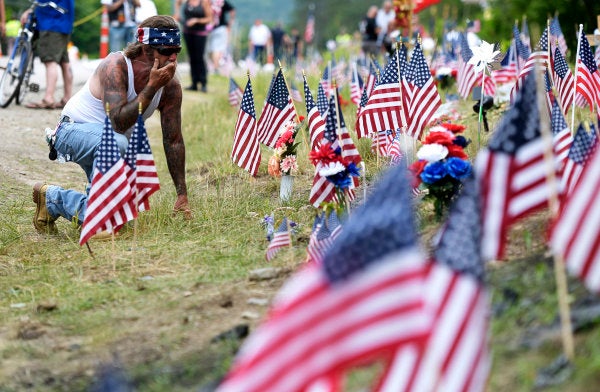 Thousands of motorcyclists from New Hampshire and surrounding states took to the roads Saturday to honor and remember seven people, five of them Marines, who died in a horrific crash on June 21 in Randolph.

As bikes roared into the Gulf service station on 28-Bypass in Manchester Saturday morning, Steve Allison, one of the organizers of the Ride for the Fallen 7 to benefit the families of those killed, said he was overwhelmed by the response. He didn't know many of the riders who turned out, but he said, “These people are my family.”

Other motorcyclists met up in their local communities, including Derry, Gorham, Keene, Nashua, Peterborough and Rochester, for the first leg of the ride to Laconia. From there, they planned to head north as a group for a memorial service at the crash site.

What happened two weeks ago, Allison said, was unprecedented. And in response, he was hoping for “an unprecedented memorial.”

“This was so horrific,” he said. “Let's counter it with something equally as loving, caring and respectful.”

“The main thing is to honor these seven fallen souls and show an outpouring of love,” he said.

And that's what members of the Jarheads Motorcycle Club, a group for Marines and Navy corpsmen, were doing when they were killed two weeks ago. Gathered in the North Country for their annual regional meeting, they were on their way to a charity event in Gorham when a truck pulling a flatbed trailer crossed the yellow line and then swerved back, sending the trailer into a fatal collision with the motorcyclists. The truck driver has been charged with seven counts of negligent homicide.

Ride participants on Saturday were still struggling to make sense of the tragedy. “People go out for a ride, doing a wonderful thing to help others, and they don't come back,” said Simon LeComte of Bedford. “It's wrong.”

Judy Boyd of Raymond volunteered to help out at the Manchester registration for Saturday's ride, getting riders to sign waivers and marking their hands with the number 7. “There are just not any words” for the grief that has followed the crash, she said — especially after revelations that the 23-year-old truck driver who collided with the Jarheads group should have lost his commercial driver's license but “slipped through so many cracks.”

Stacey Raven of Goffstown was also helping out at the registration table. Her son is a Marine Corps veteran. “This was a horrible event,” she said. “We needed to come together.”

Sandy Caruso is manager of the Gulf station where the Manchester group met up. She said she had “no hesitation whatsoever” when Allison asked if they could meet there for the ride. “It's my honor,” she said.

Caruso has two sons in the military, one in the Air Force, the other a Marine. The crash on June 21 has affected everyone, she said. “I haven't talked to one person that doesn't shake their heads about what happened,”' she said.

“These men that died gave up a lot for this country, and then they gave the ultimate,” she said. “They're just out enjoying life and they're taken out.”

Jay Cadieux of Nashua, who rides an Indian Scout bike, said he's seen a lot more camaraderie among riders since the crash, regardless of which bikes they ride. “We're all giving the wave to each other,” he said. “We all seem to be bonding together.”

Motorcycle groups as far away as California were planning their own rides Saturday in solidarity with the New Hampshire event. Allison said he's even heard from people in other countries who wanted to support the families of those lost. For veterans and bikers alike, he said, “It's like part of your family's gone.”

Before the ride, Allison spoke briefly to those gathered in Manchester. “This has been the biggest honor of my life, to put this together,” he said “You are my brothers and sisters. I love every one of you.”

And he offered a prayer to God: “Protect us all as we go forward.”

As the Manchester group was gathering, dozens of motorcycles passed by. It was the Derry group, heading north, and the waiting riders cheered them on loudly.

About 9:15 a.m., dozens of riders from Nashua pulled up to join the Manchester group for the ride to Laconia. “Mount up!” Allison called out.

And as the group headed out, a few local residents stood by the roadside to cheer them on. Among them was Diane Guimond, who called it a “sad happy day.”

She came to drop a donation in the jar and to show support, she said. “I wanted to just wave them off,” she said. “It's the least I can do: wave to them and wish them well.”

Marie Kohler stood nearby. “It was important for us to be here,” she said. “We don't have motorcycles but we had to be part of this somehow.”

What can others who aren't participating in the ride do to help? “Keep them in your prayers,” Allison said.

He also urged those touched by the crash to send donations to the Jarheads Motorcycle Club, P.O. Box 362, Marlborough, Mass., 01752.

SEE NEXT: Driver arrested for plowing into Marine motorcycle club had suspected heroin in his home