The incident "got us all wondering whether there's been someone working in skunkworks on this." 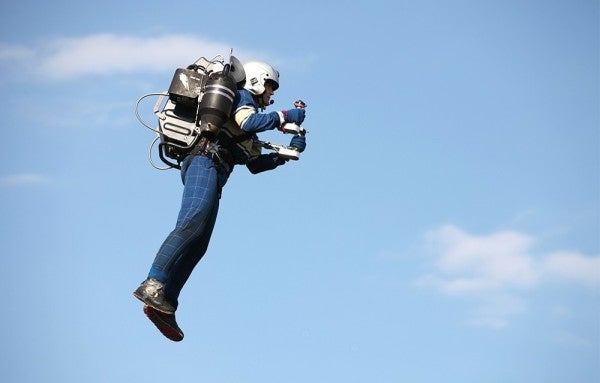 It sounds like something out of a movie: An American Airlines pilot calls the control tower at Los Angeles International Airport to warn that his plane just flew past someone in midair — a person wearing a jet pack.

But the pilot really did give that warning Sunday night, and it wasn't laughed off. The FBI is investigating.

After all, jet packs are not confined to the realm of science fiction. There are a handful of companies around the world that make devices that power a single person up into the air.

Former Swiss Air Force pilot Yves Rossy has created a type of winged jet pack, which typically requires him to be hoisted into the sky by a helicopter or balloon; he can take off from there. Another company, Zapata, has made something like a flying skateboard, which gives off a Marty McFly vibe.

JetPack Aviation Corp., based in Van Nuys, says it's the only one to have developed a jet pack that can be worn like a backpack. The technology is real: Chief Executive David Mayman demonstrated it five years ago by flying around the Statue of Liberty, and his company has created five of them.

So it's not out of the question that someone could have been soaring above the airport last weekend, giving pilots a scare.

Related: The Royal Navy is eyeing jetpacks for amphibious assaults, which is a terrible idea

Mayman was quick to say that if a jet pack was involved, it wasn't one of his. JetPack Aviation keeps its five packs locked down, he said, and they're not for sale. The company does offer flying lessons at $4,950 a pop, but he said students are attached to a wire and can't stray too far.

None of the company's competitors sell their products to consumers either, Mayman said.

The weekend incident “got us all wondering whether there's been someone working in skunkworks on this,” he said, using a term for a secret project. Or maybe, he mused, the airline pilot saw some kind of electric-powered drone with a mannequin attached.

The fact remains: It's very difficult to get access to a jet pack. If you accomplish that, though, it's not hard to get permission to fly it.

The Federal Aviation Administration doesn't issue licenses specifically for operating the devices. A jet pack could be operated as an ultralight vehicle — meaning it would not be registered with the FAA and its operator wouldn't need a pilot license — if it meets weight, fuel capacity and speed requirements.

But it still wouldn't be allowed to surprise officials by freewheeling over California's biggest airport at night. Without FAA approval, ultralight vehicles can fly only during the day and are barred from flying over densely populated areas or in controlled airspace.

Jet packs that don't meet the ultralight requirements could be issued a special experimental certificate, which would require a class of pilot certificate specific to the aircraft and have its own set of flight restrictions, the FAA said.

“If you want to do something that's a thrill-seeking thing, then yes, you can fly one,” said Mike Hirschberg, executive director of the Vertical Flight Society, a nonprofit professional organization.

To be clear, they're not well suited to becoming a common form of transportation anytime soon.

For one, they're too loud and don't have enough endurance, Hirschberg said.

For another, they're too expensive. If JetPack Aviation were willing to sell its jet packs to individuals, it would charge at least $300,000 each, Mayman said.

Besides, selling to the general public would create liability concerns.

“It's so easy for someone to misuse one of these aircraft,” Mayman said. He doesn't want to be on the hook if, say, a flier were to plow into a car or building.

Related: This is what happens when you strap a head-tracking rifle turret to a jet pack

Mayman said that he isn't interested in selling his products to anyone but governments or government agencies, and that his company's focus is on search-and-rescue applications.

Inventors have long dreamed of creating jet packs that would rocket individuals through the air.

In the 1950s, a Bell Aerosystems engineer named Wendell Moore developed a rocket belt that could strap onto a person's back and fly them a short distance. Though the U.S. military seriously considered the device in the 1960s for use by soldiers, the rocket belt's range of just a few seconds was deemed too short, according to the Smithsonian National Air and Space Museum.

In 2018, an engineering competition sponsored by Boeing Co. and other groups asked inventors to build a quiet, personal flying device that could carry a person for 20 miles. But instead of quiet jet packs, contest submissions were more like air motorcycles.

If quiet is the priority, there are ways to fly that don't even involve motors, propellers or combustion.

In 1982, a North Hollywood truck driver named Larry Walters tied 42 helium-filled weather balloons to a lawn chair and floated up 16,000 feet in the air. He surprised at least two airline pilots, one of whom radioed the FAA. (Walters was fined $1,500.) To return to earth, Walters used a pellet gun to pop the balloons.