Jim Nabors, who starred as the bumbling gas-station-attendant-turned-Marine Gomer Pyle on “The Andy Griffith Show” and his own subsequent spinoff,... 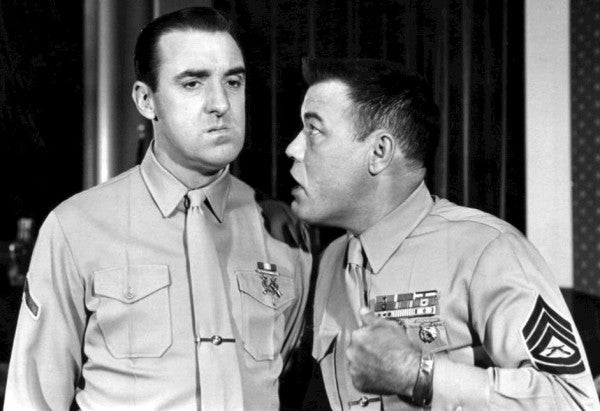 Jim Nabors, who starred as the bumbling gas-station-attendant-turned-Marine Gomer Pyle on “The Andy Griffith Show” and his own subsequent spinoff, died Thursday morning in Hawaii. He was 87.

His death was confirmed by his husband, Stan Cadwallader.

While best known for his role as Pyle, Nabors also had a successful singing career, briefly hosted a variety show and held several stints on stage in Las Vegas.

Nabors was born in June 1930 in Alabama, and after graduating from the state’s university, he moved to New York and briefly worked as a typist.

Rest in peace Jim Nabors, one of the few to ever be named an Honorary Marine. pic.twitter.com/B3m3RYAbPy

A bad case of asthma forced him to pack up and move to the West Coast, where he worked as a film cutter for NBC and performed at nightclubs like the Horn in Santa Monica.

It was there in 1962 that Andy Griffith, then the star of his own self-titled show on CBS, spotted Nabors and gave him his big break.

“I’d sing like this (in a baritone voice) and talk like this (in a Pyle twang). It made no sense to anybody. Even Andy commented: ‘I don’t know what you do, but you do it very well,’” Nabors told The Deseret News in 1984 of his hiring.

Griffith cast Nabors that year as Pyle, a bumbling gas station attendant who quickly won the hearts of fans with his good-natured naivety.

As a 1967 Time profile described, Pyle “wears a gee-whiz expression, spouts homilies out of a lopsided mouth and lopes around uncertainly like a plowboy stepping through a field of cow dung. He is a walking disaster area… Yet in the end, Gomer’s goodness always wins out.”

The character proved so popular that Nabors scored a spin-off, “Gomer Pyle, U.S.M.C.” in 1964, in which the character entered the Marines opposite Frank Sutton’s Sergeant Vince Carter.

Not Released (NR) For editorial use only. Any commercial or promotional use of CBS content requires CBS’s prior written consent — contact your local office for assistance.

In memoriam: Remembering the famous figures we lost in 2017

The show was a success, though Nabors quit in 1969 after five seasons, citing a need to “reach for another rung on a ladder.”

He hosted his own variety show, “The Jim Nabors Hour,” from 1969 to 1971, and earned an Emmy nomination for the short-lived program.

After retiring Pyle, Nabors continued with small roles on both primetime and children’s shows, like “The Lost Saucer” and “The Carol Burnett Show.”

He briefly left Hollywood after becoming “burned out,” but stepped back into the spotlight at the request of Burt Reynolds. In 1983, Nabors appeared alongside Reynolds in “Stroker Ace,” and a year later, in “Cannonball Run II.”

He also enjoyed a stint in Las Vegas in the ’80s, starring in productions of “Moulin Rouge” and “The Music Man.”

Nabors abandoned California for a more laid-back life in Hawaii in 1976, though he suffered health woes in 1994 after a case of hepatitis B caused his liver to fail.

From 1972 up until 2014, Nabors also regularly lent his baritone to “(Back Home Again in) Indiana,” the tune used annually to kick off the Indianapolis 500.

The gig came as part of a successful singing career that included more than 20 albums, among them one platinum record.