The photos, along with the iconic image, included scenes of Marines scrambling up volcanic hillsides on the first day of battle, caring for and carrying wounded men, standing over dead Japanese soldiers and burning the enemy out of tunnels with tank-mounted flamethrowers. 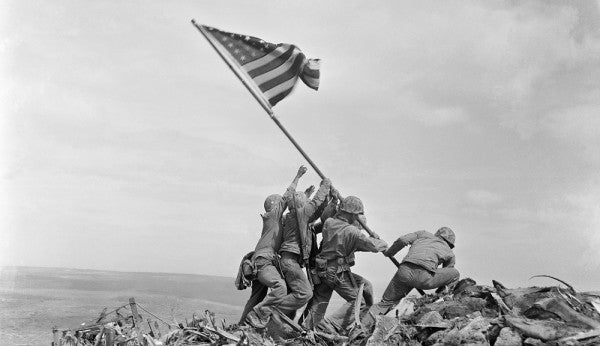 On the morning of Feb. 23, 1945, Col. Chandler Thompson ordered a 40-man patrol of Marines from the 28th Regiment to climb to the top of Mt. Suribachi on Iwo Jima and raise a U.S. flag so observers could see if they made it.

The Marines, with 70,000 troops, had invaded the volcanic island, defended by approximately 21,000 Japanese, four days earlier. The dormant volcano towered above the landscape of the 8-square-mile island, rising nearly 550 feet above sea level.

They made it. Secretary of the Navy James Forrestal, who had been observing the battle offshore, came on the island with Gen. Holland “Howlin Mad” Smith and, seeing the flag, asked for it as a souvenir. Chandler, who believed the flag was rightfully owned by his 2nd Battalion, sent a messenger with a larger flag to replace it.

Attached to a heavy water pipe, the second flag, with six Marines working to raise it, went up. Associated Press photographer Joe Rosenthal, who was piling rocks to get a better angle, swung his Graflex Speed Graphic camera into position and snapped a photo.

He would later write that he had no idea if he had a usable image.

Not only was it usable, it became the most famous image of World War II in the Pacific. It won Rosenthal a Pulitzer Prize, the only time that honor was awarded to a photo the same year it was taken. It was put on a postage stamp, printed on posters to sell war bonds and is reproduced in bronze at the Marine Corps War Memorial in Arlington, Virginia.

And it is in an album of 52 of Rosenthal's photos purchased about five years ago by Kenny Bassett, a master pipefitter at the University of Missouri. At a price of $500, he said last week, he almost walked away from it.

His wife, Jeannie Bassett, saw an ad for a sale that included Iwo Jima pictures.

“I assumed it was your normal magazine cutout, poster and I was kind of hoping for a signed Joe Rosenthal print, because they can be nice to have,” Bassett said.

At the sale, he was handed a family-style photo album with two small black and white images on each page. The thick brown cover had no clue to what was inside and there was no name in it to identify the original owner.

“I looked at about 3 pages and I started tearing up,” said Bassett, who considers himself a student of history.

He asked if he could go to the back of the garage to look it over carefully.

“I started looking and got about halfway through and I was going, 'Oh my God, Oh my God',” Bassett said.

The photos, along with the iconic image, included scenes of Marines scrambling up volcanic hillsides on the first day of battle, caring for and carrying wounded men, standing over dead Japanese soldiers and burning the enemy out of tunnels with tank-mounted flamethrowers.

Returning to the owner, Bassett tried to negotiate.

“I said, 'will you take any less for it?' He said no and I handed it back because I am not paying $500 for anything at a garage sale unless it is a car,” he said.

As he walked away, he said, he felt totally dejected. His wife asked what was wrong.

“I told her I had just seen something and I have never seen anything like it,” Bassett said.

As he explained, she insisted he buy it and they went to the bank for the cash.

His research convinced him that all the combat photos were from Iwo Jima, and that they were all by Rosenthal.

“I studied it for two years after I got it,” he said. “I went to every library, I went and looked at every photo, every film.”

Born in 1911 in Washington, Rosenthal became a photographer and reporter for the San Francisco News in 1932. He joined the Associated Press staff in 1941 and in March 1944 was assigned to cover the Pacific fleet.

He was about 5-feet-5-inches tall and smoked cigarettes in a holder like President Franklin Roosevelt, Buell said in an interview.

“As a man, he was quiet, he was soft-spoken,” Buell said. “If you were going to meet with a group of war combat photographers — he didn't fit the swashbuckling, raconteur model.”

The photo of the flag raising was available to newspapers in the United States 17½ hours after it was taken. Its publication created a sensation and Roosevelt ordered that the six men be identified and brought to Washington when the fighting ended.

Buell wrote about Rosenthal for Connecting, a newsletter prepared by AP retirees, in the issue dated Friday.

“It's early March,” Buell wrote. “Joe Rosenthal arrives in Guam, a stopover while enroute to Hawaii to make preparations for the Okinawa invasion. It's there, in Guam, where he first sees his Suribachi pictures. Fellow correspondents offer congratulations. A tearsheet of the Gung Ho photo is passed around. “Did you pose it, Joe?” He says, he did. Then comes a tearsheet of the flag-raising picture. “How about that?” No, didn't pose THAT one. Not a bad photo, though, says Joe … modestly.”

The Gung Ho photo shows 17 Marines raising rifles and helmets after raising the flag. Confusion over what Rosenthal meant — and questions raised by a photographer who captured the first flag-raising and knew Rosenthal was not present for that moment — were turned into a radio report that the flag-raising photo was staged.

Film taken at the moment of the second raising proved it was not, Buell wrote. And Rosenthal was brought to New York by AP, not to quiet the rumors but to receive a bonus of a year's pay and to tour for the Seventh War Bond sales drive, with his photo as the drive's logo.

The logistics of capturing the image to making the photo available from a raging battle to newspapers throughout the United States in such a short period of time was a notable achievement all its own.

The camera Rosenthal carried had a film pack that allowed for 12 exposures before reloading. Moving each frame into position took two to three seconds, Buell said. If he had been between photos the instant the pole was raised, it would not have been possible.

Then Rosenthal walked down the mountain, hitched a ride to the USS El Dorado, the invasion command ship, and packed his film for a ride on an amphibious plane to Guam to the Wartime Still Picture Pool.

There, the photo was developed and Jack Bodkin, an AP photo editor who had enlisted in the Navy and been assigned to run the pool, was watching over the incoming film.

“He pulled the frame out of the ash, he put it in front of a light box with water still streaming out of the side, he said 'Here's one for all time,'” Buell said.

The photo was transmitted to San Francisco by RCA, then to AP as a radio photo negative and a print was made. That was distributed to all the news services that were members of the pool and arrived in time to make the front pages of newspapers on Sunday, Feb. 25, 1945.

After the war, Rosenthal worked for Times World Wide Photos before joining the San Francisco Chronicle, where he worked until his retirement in 1981. In 1996, he was made an honorary Marine.

Rosenthal died in 2006. To keep his memory alive, in 2017 the USMC Combat Correspondents Association asked the Navy to name a combat ship after him.

The Battle of Iwo Jima lasted from Feb. 19 to March 26, 1945, and is ranked as the bloodiest battle ever fought by the Marines.

At that stage of the war, the American forces in the Pacific were advancing toward the Japanese home islands and planes flying off Iwo Jima were harassing bombers based in the Marianas Islands as they struck at Japanese cities.

The invading force landed to find the enemy dug into tunnels, manning reinforced concrete blockhouses and willing to fight to the last man. It took hand-to-hand combat, with grenades and flamethrowers used to kill the Japanese or rout them out of their entrenched positions, to defeat them.

Of the Japanese defenders, accounting after the battle estimated that 18,000 were dead or missing and presumed dead. Only 216 were taken alive as prisoners.

Of the Marines who were landed, 6,821 were killed, or 9.7 percent of the invading force. About one-third of all the men engaged were wounded or killed.

After it was over, 27 Congressional Medals of Honor were awarded.

There was only one more major offensive in the Pacific, against Okinawa. That, too, was a bloody fight and again the Japanese fought to the bitter end.

The outcome of those battles helped convince President Harry Truman to use the atomic bomb on Hiroshima and Nagasaki to avoid the American casualties — estimated at 200,000 or more dead — that would have resulted from an invasion of the Japanese home islands.

Albums of Rosenthal prints have sold for tens of thousands of dollars at major auction houses, but Bassett isn't interested in selling it.

Instead, his first wish for it is to find the family person who originally owned it. When he purchased it, the seller said he bought it an auction 30 years earlier and it included a chaplain's manual and a Marine Corps manual.

If he can't do that, Bassett said, he wants to give it to a museum where it can be viewed and studied.

There were no names on those materials and the man said he gave them away to a minister in Columbia, Bassett said.

And that's why Bassett speculates that the album may have been owned by a Marine chaplain.

There is no indication in the album of how the prints — all on a 3.5-inch by 4.5-inch format — came into existence. Bassett has not removed any of the pictures from their mounts and has inserted a piece of acid-free paper between each page to help preserve them.

The album includes about 40 photographs of idyllic islands, obviously taken with a different camera. Amy Sancetta, a retired AP photographer who was in Columbia to judge the Pictures of the Year competition, got a chance to look at the album Tuesday when Bassett brought it to the School of Journalism.

The extra photos are intriguing, she said. She wondered if they were photos taken by the original owner of the album.

“Did they have a chance to have some R&R before the big fight?” Sancetta asked. “Did it come after the fight? And how did they manage that?”

Sancetta had the same reaction to the album that Bassett had.

“Oh my god, they are fantastic,” she said.

She understands how difficult it was to get a good shot with the equipment Rosenthal used, she said. Sancetta, who has herself won a Pulitzer Prize for her photography, has covered major sporting events, the 9-11 attacks in New York and political campaigns.

“I am a lover of history as well, and to find images I have not seen before that have incredible historical significance, these pictures are so crisp and detailed, that the story that they tell and continue to tell is absolutely clear,” she said. “They are an absolute treasure.”