Chapman, an Air Force combat controller, was posthumously awarded the Medal of Honor in August 2018 for his bravery during the 2002 Battle of Takur Ghar in Afghanistan, in which he charged enemy bunkers and exposed himself to blistering fire while trying to rescue a fallen comrade. 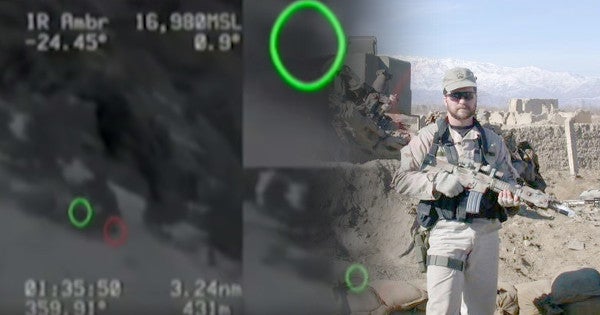 Most actions that lead to the awarding of the Medal of Honor are based on eyewitness accounts or physical evidence.

The actions of Air Force Technical Sgt. John Chapman, however, were caught on video.

Chapman, an Air Force combat controller, was posthumously awarded the Medal of Honor in August 2018 for his bravery during the 2002 Battle of Takur Ghar in Afghanistan, in which he charged enemy bunkers and exposed himself to blistering fire while trying to rescue a fallen comrade.

And hovering over the 10,469-foot peak at the time was a CIA predator drone and other surveillance assets, which captured it all.

Dan Schilling, a former combat controller and author of a new book about Chapman, narrates a new video of that footage that explains Chapman’s actions and what he did to protect his teammates.

“You’ll watch Chapman’s heroic actions as he saves the lives of his entire SEAL Team and then another 18 members of a quick reaction force, earning America’s highest award, the Medal of Honor,” Schilling explains.

In the nearly nine-minute video, Schilling walks through the team’s actions and highlights Chapman in the frame so viewers can keep track of his progress.

“It was really grainy. But there was still somebody up there fighting, and you could see that,” Kenny Longfritz, Chapman’s first sergeant at 24th STS, said of the Predator drone footage he viewed after the battle. There was no doubt in his mind, or among many others in the squadron, that it was John.

Chapman’s actions occurred on March 4, 2002 during Operation Anaconda, the largest battle involving conventional U.S. troops in the Afghanistan War. While attached to SEAL Team 6 as a combat controller — the team’s expert on air strikes and communications — Chapman was one of the first off the helicopter as the team tried to rescue a fallen SEAL.

Watch the full video below:

The First Medal of Honor Ever Recorded