Editor’s Note: This article by Brendan McGarry and Hope Hodge Seck originally appeared on Military.com, the premier source of information for... 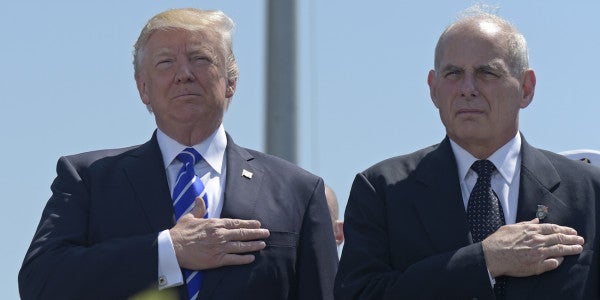 Editor’s Note: This article by Brendan McGarry and Hope Hodge Seck originally appeared on Military.com, the premier source of information for the military and veteran community.

President Donald Trump has named retired Marine Gen. John Kelly, who has been serving as the head of the Homeland Security Department, as his new White House chief of staff to replace Reince Priebus.

The president announced his decision Friday evening on Twitter.

“I am pleased to inform you that I have just named General/Secretary John F Kelly as White House Chief of Staff. He is a Great American … and a Great Leader,” he tweeted. “John has also done a spectacular job at Homeland Security. He has been a true star of my Administration.”

The news came a day after The New Yorker reported the new White House communications director, Anthony Scaramucci, criticized Priebus and threatened to fire him in an explicit interview with Ryan Lizza, a writer for the magazine.

“I would like to thank Reince Priebus for his service and dedication to his country,” the president tweeted. “We accomplished a lot together and I am proud of him!”

Kelly, a retired four-star Marine general who commanded troops in Iraq and who lost a son in Afghanistan, is among a group of high-profile military leaders, either currently serving or retired, working in the Trump administration.

Kelly and Dunford are close friends. Both men hail from Boston. Dunford gave Kelly the news that his son was killed.

Kelly, who commanded U.S. Southern Command prior to his retirement, has a reputation for being plainspoken and direct, even when his views conflict with those above him.

As part of his SouthCom role, he oversaw the military detention facility at Guantanamo Bay, Cuba, from 2012 to 2016 — a period in which the Obama administration was working hard to shut the facility down. Nonetheless, he maintained his support for Guantanamo in public statements, telling Military Times in fall 2016 that there were “no innocent men” being held there.

Kelly commanded a task force in Baghdad and other cities in Iraq shortly after the invasion of U.S. forces into the country in 2003.

He also is the most senior officer from the wars in Iraq and Afghanistan to lose a child in the conflict. His son, 1st Lt. Robert Kelly, was killed in 2010 while leading Marines in Sangin, Afghanistan. In a much-cited speech given just days after his son's death in combat, Kelly waxed eloquent about the sacrifices made by the military.

“If anyone thinks you can somehow thank them for their service and not support the cause for which they fight — our country — these people are lying to themselves,” he said. “More important, they are slighting our warriors and mocking their commitment to this nation.”