President Donald Trump and some of his friends are growing frustrated by the restrictions and discipline imposed by new White... 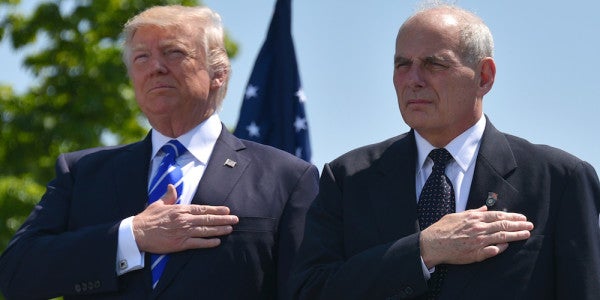 President Donald Trump and some of his friends are growing frustrated by the restrictions and discipline imposed by new White House Chief of Staff John Kelly, prompting some Trump loyalists to nickname him “the church lady,” The Washington Post reported on Aug. 31.

Kelly is viewed by these Trump loyalists as “strict and morally superior,” according to the Post report, and they believe he is likely to clash with the president eventually.

Kelly was appointed chief of staff in July, following a chaotic series of staff departures that included the ousting of Kelly's predecessor Reince Priebus, the resignation of press secretary Sean Spicer, and the firing of communications director Anthony Scaramucci.

Kelly's move from homeland security secretary to White House chief of staff was part of a push to enact order in the West Wing, where Trump was accustomed to accepting spontaneous, freewheeling meetings and phone calls. With Kelly in the White House, those phone calls are routed through Kelly first, and Trump friends must make official appointments in order to visit the Oval Office.

Yet Trump has privately begun flouting these rules, according to the Post, frequently calling advisers and confidants — including former chief strategist Steve Bannon — from his personal phone.

“Donald Trump resists being handled,” Roger Stone, a friend and former adviser of Trump, told the Post. “Nobody tells him who to see, who to listen to, what to read, what he can say … Keeping him in the dark and feeding him s— is not going to work. Donald Trump is a free spirit.”

Yet in public, Trump has appeared supportive of Kelly and frequently praises him. On Friday morning, Trump said on Twitter that Kelly was “doing a great job as Chief of Staff.”

“I could not be happier or more impressed – and this Administration continues to … get things done at a record clip. Many big decisions to be made over the coming days and weeks. AMERICA FIRST!” he tweeted.