White House chief of staff John Kelly raised eyebrows when he discussed the historical context of controversial monuments dedicated to... 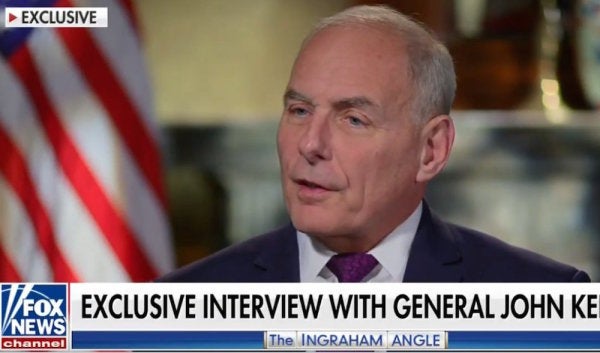 White House chief of staff John Kelly raised eyebrows when he discussed the historical context of controversial monuments dedicated to Confederate figures in the US Civil War.

Speaking to Fox News' Laura Ingraham on Monday, Kelly discussed the controversy surrounding the removal of plaques that honored Confederate Army General Robert E. Lee and George Washington. The plaques, which came in a set, were hung inside a church in 1870 and are scheduled to be removed following the deadly protests in Charlottesville, Virginia.

“History is history,” said Kelly, a retired four-star Marine general. “There's certain things in history that were not so good, and other things that were very, very good.”

“I think we make a mistake though, and as a society, and certainly as individuals when we take what is today accepted as right and wrong, and go back 100, 200, 300 years,” he continued.

Monuments dedicated to Lee, particularly the statue in Charlottesville that attracted a following from white nationalists, have been viewed unfavorably as civil rights groups have become more vocal on the racial implications behind the Confederacy's narrative.

“It's inconceivable to me that you would take what we think now and apply it back then,” Kelly said. “I think it's very, very dangerous. And it shows you how much of a lack of appreciation of history, and what history is.”

“I would tell you that Robert E. Lee was an honorable man,” he continued. “He was a man that gave up his country to fight for his state, which 150 years ago was more important than country. It was always loyalty to state first back in those days. Now it's different today.”

Kelly continued to suggest that the Civil War was initiated after the North and South failed to come to a compromise.

“But the lack of an ability to compromise led to civil war,” Kelly said. “And men and women of good faith on both sides made their stand where their conscience had them make their stand.”

Kelly's statement echoed President Donald Trump's condemnation of “both sides” following the deadly protest in Charlottesville. Trump's comments attracted critics when he coined the term “alt-left” for counter-protestors protesting against white nationalists, who were widely viewed as the antagonizing force in the riots.

“We condemn in the strongest possible terms this egregious display of hatred, bigotry, and violence on many sides,” Trump said at a press conference in August. “On many sides.”