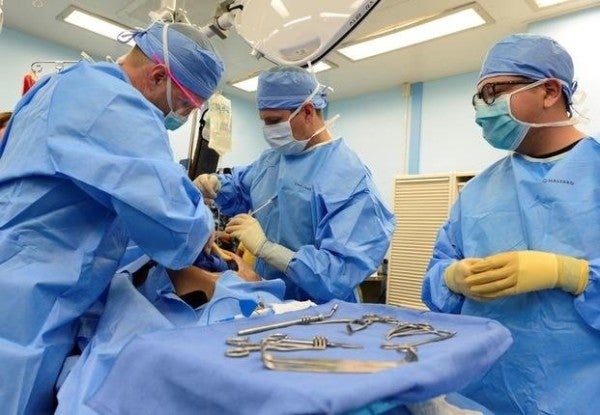 A senator has taken up the cause to negate a controversial court ruling that bars service members from suing the federal government in cases of medical malpractice by military doctors.

Sen. John Kennedy, R-Louisiana, has introduced an amendment to the Senate's proposed defense policy bill that would allow military personnel to file claims for injury or death caused by improper medical or dental care or during research studies at a military medical facility.

Troops are prevented from suing the federal government for injuries deemed incidental to military service, including medical malpractice, under a 1950 court ruling, Feres v. United States. In that case, the U.S. Supreme Court ruled that service members fall under an exception to the Federal Tort Claims Act — the law that allows citizens to sue the government.

Kennedy's amendment mirrors similar legislation introduced in April in the House, which seeks to exempt medical negligence or wrongful acts by military physicians from the ruling, commonly referred to as the Feres doctrine.

Under the proposed amendment, troops and their families would be allowed to sue, except in cases of care rendered at battalion aid stations, in combat or at a field facility in a combat zone.

The Senate plans to debate the defense bill this week; whether any amendments will be considered and included in the final draft has not been announced. In past years, fewer than a handful of amendments have received a roll call vote.

In the House, Rep. Jackie Speier, D-California, has sponsored the Sgt. First Class Richard Stayskal Military Medical Accountability Act, named for an ArmyGreen Beret and former Marine who has terminal lung cancer and whose military doctors failed to follow up on a suspicious mass found during a pre-training medical screening.

Speier said the legislation, which has been forwarded to the House Judiciary Subcommittee on the Constitution, Civil Rights, and Civil Liberties, is needed because the Feres ruling has “deprived troops of their legal rights.”

The U.S. Supreme Court ruled in three separate cases in 1950 that the Federal Tort Claims Act, the law that permits citizens sue the government for wrongdoings by federal employees or agencies, does not apply to most service members for injuries resulting from the negligence of other military personnel.

The justices said the ruling was needed to ensure that Congress was not “burdened with private bills on behalf of military and naval personnel.”

Critics have argued, however, that the compensation package provided to troops or their families following a major medical error in a U.S. military medical facility is not sufficient to care for severely injured or ill personnel or their families in cases of death.

Speier's proposed legislation was the first introduced in nearly a decade challenging Feres in medical malpractice cases. Rep. Maurice Hinchey, a New York Democrat who passed away in 2017 after serving in Congress for 20 years, introduced the Carmelo Rodriguez Military Medical Accountability Act in 2010.

The bill was named for a Marine sergeant who died at age 29 in 2007 from melanoma. His military doctors found an unusual growth and labeled it in Rodriguez's records as a melanoma, but never told him and didn't treat it.

Last month, the U.S. Supreme Court decided against hearing a case that challenged the legitimacy of the Feres ruling. In similar cases during the past several decades, the justices have said that Congress needed to change the law if it wanted troops to have the right to sue.

As with the House bill, Kennedy's amendment would apply to claims pending on the date the bill becomes law and any claims arising after the bill is signed.