John McCain Was No Dove, But One Of His Biggest Targets Was Pentagon Waste 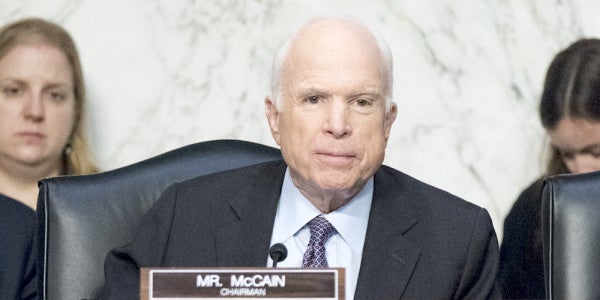 Few lawmakers have ridiculed wasteful Pentagon spending or scolded military officials from the Senate floor, hearing rooms, campaign events and in reports as often as Sen. John McCain did.

In December 2011 — the 50th anniversary of President Dwight D. Eisenhower’s warning about the power of the “military-industrial complex” — McCain took to the Senate floor to criticize lawmakers backing pet weapons projects, saying that “in the military-industrial-congressional complex, earmarks are the currency of corruption.”

That day McCain reserved particular scorn for one of the U.S. Air Force’s most prized programs: the radar-evading F-22 jets that the military service fought vigorously to keep buying even as problems with the planes’ onboard oxygen systems forced the entire fleet to be grounded. The defense secretary at the time, Robert Gates, also was arguing to halt the program.

McCain said “the 168 F-22s, costing over $200 million each, may very well become the most expensive corroding hangar queens in the history of modern military aviation.”

But McCain was no dove. He remained a vigorous advocate for injecting American military force to shape the outcome of conflicts from Afghanistan, Iraq, and Syria, to Libya, North Korea and Ukraine, sometimes to the chagrin of his own party. In recent years, the Arizona senator also helped lead the push for a reorganization of the Pentagon offices responsible for weapons research and purchases.

McCain administered most of his verbal lashings in the pre-Twitter era when shame at being publicly called out for wasting taxpayer dollars appeared to be more effective than since. But as the son and grandson of four-star admirals, and as a former Navy pilot who was shot down over Hanoi, captured and tortured for six years before being released, McCain’s words carried more sting than they would rolling off the tongue of any other lawmaker.

A public dressing-down from McCain gave Pentagon officials a shot of urgency as they crossed the Potomac to their desks, said Dov Zakheim, who served as the Pentagon’s comptroller under President George W. Bush. “I always have felt, and one of the things I’ve always admired about him, is he has a phenomenal sense of right and wrong,” he said.

But McCain was more than just angry words.

In late 2001, as the country was reeling after the 9/11 attacks and the Bush administration already had begun bombing Afghanistan, with the help of his staff McCain dug into details of the Pentagon’s inscrutable budget documents to find a proposal that would have allowed the U.S. Air Force to lease airplanes from Boeing to be used as refueling tankers instead of buying them outright.

McCain began calling out the Air Force for agreeing to the $23.5 billion leasing arrangement. Although the Pentagon argued that the lease would only cost $150 million more than buying the planes outright, two government probes prompted by McCain’s inquiries found that the arrangement would cost as much as $2 billion more.

Zakheim recalled chatting with McCain before a hearing while he was still investigating the Air Force tanker leasing proposal.

After two years of dogged questioning by McCain, the Air Force scuttled its proposal. In 2005, two key people involved in the lease negotiations went to prison — Mike Sears of Boeing and Darleen Druyun, the Air Force’s No. 2 acquisition official — and a year later Boeing paid $615 million in fines to end the federal investigation into its illegal hiring of Druyun, even as she was negotiating the lease on behalf of the Air Force.

McCain’s campaign against wasteful projects extended beyond the Pentagon’s weapons. In July 2015 he released a report titled “America’s Most Wasted,” which listed obscure programs such as a $50,000 study to assess study the bomb-detecting capabilities of elephants, to $14 million for a duplicative catfish inspection office.

While McCain highlighted in that report the country’s $18 trillion national debt at the time and warned that “fiscal offenses are leading us down a dangerous path,” in December 2017 he voted for the Republican tax package tax proposal that economists say would add $1.5 trillion to the debt by cutting taxes on corporations and the wealthy.

“There’s only one John McCain, and he’s not going to be duplicated,” said former Defense Secretary Chuck Hagel, who also served alongside McCain in the Senate from 1997 to 2009. McCain’s departure “leaves a big void” in congressional oversight of the Pentagon, “but John would be the first one to tell you that no one is indispensable … otherwise the republic would have folded long ago.”

Hagel, a decorated former Army sergeant and infantry squad leader in Vietnam, faced a grueling confirmation hearing in January 2013, when he was nominated by President Barack Obama to become defense secretary. At the hearing before the Senate Armed Services Committee, McCain sharply questioned Hagel’s opposition to the 2007 Iraq War surge. Hagel, who served as national co-chairman of McCain’s 2000 presidential bid, said he never took the grilling personally and that they remained friends.

Related: 10 Photos That Capture John McCain’s Heroism In Vietnam And His Impact On The Military »

McCain’s impulse to do things differently sometimes led him to wrong conclusions, said Todd Harrison, director of defense budget analysis at the Center for Strategic and International Studies.

Harrison cited the restructuring of the Pentagon’s wweapons-buyingsystem that decentralized decision making, allowing military services to have a greater say than the Defense Department’s main acquisition office — a move championed by McCain.

“Some of the things he was pushing were not always productive. And I don’t think they were always informed by strong analysis,” Harrison said. “I don’t think a lot of that (acquisition reform) will prove to be a positive change.”

On McCain’s oversight role, Hagel said that while he “strongly believed in congressional oversight, no secretary of defense is going to agree with everything that members of Congress had to say on the Pentagon, on the philosophy, on weapons, the budget, and training.”

Zakheim said that with McCain gone, it will be a while before other lawmakers take the mantle of congressional oversight of the Pentagon.

“I don’t see that everybody’s going to say that John McCain’s gone, and we just don’t have to worry about this stuff,” he said.

On the Senate Armed Services Committee that McCain chaired, GOP Sens. Joni Ernst of Iowa and Dan Sullivan of Alaska, as well as ranking member Jack Reed of Rhode Island — all military veterans — are well positioned to take up where McCain left off, Zakheim said.