Pvts. Raylin D. James and Joshua Q. Gerald, both assigned to the 555th Engineer Brigade at Joint Base Lewis-McChord, are currently being held in the death of 20-year-old Leroy Scott 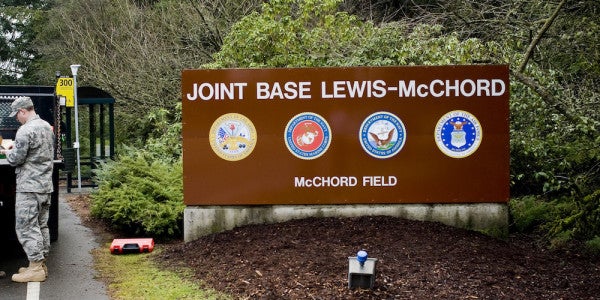 Two soldiers assigned to Joint Base Lewis-McChord in Washington state were arrested and charged with murder in the death of an Army veteran last week, local authorities announced.

Pvts. Raylin D. James and Joshua Q. Gerald, both 20 years old and assigned to the 555th Engineer Brigade, are currently being held in the death of 20-year-old Leroy Scott, according to the Kittitas County Sheriff's Office.

Scott's body was found a creek roughly 140 miles from the base on April 25, the KSCO said. James and Gerald were arrested in Pierce Country, Washington, on April 29 without incident.

According to service records, James enlisted May 2018 and joined the 555th in September as a horizontal construction engineer, while Gerald enlisted in June 2018 before arriving at JBLM six months later as an automotive logistics specialist.

According to the Maj. Matthew J. Ercolani, spokesman for I Corps at the joint base, Scott served in the same brigade at James and Gerald before separating as a private this past December.

The three men were connected through mutual friends and “were said to have been attending a party in Ellensburg on the night of the murder,” per the KSCO.

“We are aware of the incident that occurred on April 29, 2020, in the vicinity of Ellensburg, Wash., and are cooperating with Kittitas County law enforcement who maintain lead in this investigation,” Ercolani told Stars and Stripes in a statement.