The family of Jonathan Farmer opted to grieve privately Monday as he returned to his native Palm Beach County for the last time. But people who didn't know him came anyway. To salute him. 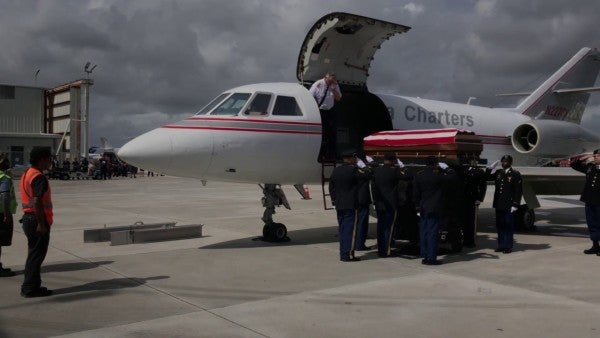 WEST PALM BEACH — The family of Jonathan Farmer opted to grieve privately Monday as he returned to his native Palm Beach County for the last time. But people who didn't know him came anyway. To salute him.

The remains of the U.S. Army veteran, who was killed Jan. 16 by a suicide bomb in northern Syria, arrived just before midday Monday at Signature Flight Services at Palm Beach International Airport for a motorcade to a Jupiter funeral home. Services are set for Feb. 18, with burial later this year at Arlington National Cemetery.

With reporters standing across the street, Farmer's casket came off a private jet and into a hearse, which pulled onto Southern Boulevard behind a Palm Beach County Sheriff's Office motorcycle escort and was gone in about two minutes.

Farmer, 37, who was born in Boynton Beach and attended The Benjamin School, served multiple overseas combat tours and was awarded some of the Army's highest honors, including a Purple Heart and three Bronze Star medals, which are awarded for exceptional achievements in a combat zone. He is survived by his wife and four children, who are residents of Clarksville, Tennessee, and his parents, Duncan and Jobeth Farmer of Palm Beach Gardens.

Monday's was a low-key arrival, ahead of the funeral Mass scheduled for at 10:30 a.m. Feb. 18 at St. Patrick Catholic Church in Palm Beach Gardens. Farmer's parents were not there; they were in Maine with another son, who was undergoing a medical procedure. But people who were strangers to Jon Farmer came anyway.

Jeff Kidwell parked his white SUV along the airport's Perimeter Road and draped a U.S. flag on its side. The West Palm Beach financial broker often sings the National Anthem at local spring-training baseball games and major-league games around the country. His girlfriend for the last decade has a grown son he “sort of adopted.” The son is in Green Beret School in North Carolina but already has been in Iraq and Kuwait.

He said the son, whom he didn't want to name, is “honored to do it. But, he said. “I worry about it every day.”

Kidwell saw a story Friday about Farmer's return and, “I wanted to pay respects to a hero,” he said, his voice choked. “I hope people would do it for my son.”

Auto glass business owner Bob Crouch had been stationed in Okinawa in the 1970s. He didn't get to Vietnam, but many of his buddies did, and some didn't come back.

“I'm here for a fallen soldier,” he said, his voice also breaking.

And three firefighters, from nearby Palm Beach County Fire-Rescue Station 24 in Westgate, climbed atop their truck to salute as Farmer's motorcade passed by. Yadian Mederos said that “we just wanted to show our respects.”

SEE ALSO: She Died In A Suicide Bombing In Syria. Now The Navy Is Changing The 'Fundamental Flaws' That Sent Her There