"Everybody paints him as really serious [but] most of the time there was a twinkle going on there." 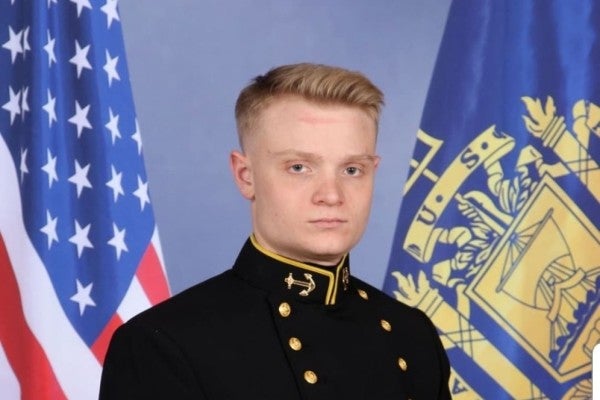 There's one moment that plays over and over in her head. She recalled a time he wore his military uniform in public, and he felt uncomfortable when people approached and thanked him for his service.

“I haven't done anything yet,” Michele Makucevich said, recalling Josh Watson's words. She framed her response in a way that would make him feel less self-conscious; she encouraged him to accept the gratitude from strangers for the soldiers and sailors he represented.

“Who would have thought,” Makucevich said, less than two weeks after Watson was killed. “It would end up this way.”

Ensign Joshua Kaleb Watson was one of three people fatally shot at Naval Air Station Pensacola in Florida on the morning of December 6. He was 23. Mohammed Sameh Haitham, 19, and Cameron Scott Walters, 21, were also fatally shot. Two sheriff's deputies were wounded before one of them killed the shooter— a member of the Saudi Air Force training to be a pilot at the U.S. military base— according to various reports. Eight others were hurt.

Makucevich lives in Texas now, but before she laid down roots in the south, Makucevich taught at the Middletown-based Newport Rifle Club for 20 years, and Watson was her student. She coached him for a year when he was a member of the Newport Rifle Club's junior rifle team; he joined the team while a student at the Naval Academy Preparatory School in Newport. He graduated from there in 2015 and moved on to the United States Naval Academy in Annapolis, Maryland, where he was a member of 10th Company and captain of the 2018-19 Rifle Team; he graduated from the academy this year.

“Really tenacious,” Makucevich said of Watson. And the young man was an excellent shot. Plus, “he was a lot of fun at practice…everybody paints him as really serious most of the time there was a twinkle going on there…he was funny.”

Watson's death “was a hit to the entire shooting community,” Makucevich said, a community she described as close-knit. Watson bonded with Makucevich's daughter, Danielle, and Alex Muzzioli, other members of the Newport Rifle Club's junior rifle team. The kids grew close, and they introduced the Alabama-bred Watson to the natural wonders of the Ocean State via sports like kayaking.

“For a Southern boy adapted to Rhode Island pretty well,” Makucevich said with subtle joy in her voice at the recollection.

Alex Muzzioli grew up shooting competitive rifle, and he competed mostly with the team based out of the Newport Rifle Club, he said.

“NAPS didn't have a range for [Watson] to use, so he practiced, competed and traveled with my team during that year while he was there. We traveled all over the place that year and even won some team events together,” Muzzioli said in an email. “I had expressed a little interest in aviation at that time, but not really much towards the [United States Naval Academy], I didn't really know much about . He got me to apply here and started working out with me and forced me to cut my long hair that I always had. I ended up getting in as a rifle recruit the next year, and shot with him during my plebe and youngster year and shot very well during that time.”

Muzzioli's now a senior and member of 11th Company at the Naval Academy, and he largely credits his path to Watson. “Long story short,” Muzzioli wrote. “I probably would not be here if it wasn't for him.”

“Whatever he wanted, he worked hard to get,” Keith Muzzioli, a Tiverton resident and Alex's father, said of Watson. His son, Alex, originally wanted to go to Alaska for college, but Watson turned him on to the Naval Academy, and he helped prepare him.

Keith offered another example of Watson's selflessness: In Canada for a shooting event, Watson, Alex Muzzioli and Danielle Makucevich were playing in the hotel pool and tossing a football when Danielle dislocated her finger. “Josh immediately rushed over to her, brought her over to us…we had to take her to the ER Josh sat in the backseat with his arm around her, comforting her,” Keith remembered. He cared about people; he wanted to help.

“I had him in the weight room every day,” Brouse said. He described Watson as a “small town Alabama kid, happy if your daughter would marry him.”

Brouse had him strength train with the football team, “an element he did not want to go into,” Brouse admitted. But Watson showed up and worked hard. “In the weight room with the football guys, he was forced to open up a little bit he really took off,” Brouse said. The young man “grew not only physically but also mentally.”

A call for change

In a video interview with Fox News after his death, Josh Watson's father, Benjamin, said his son was standing watch on the military base when he was shot at least five times. The young man “somehow found the strength, bleeding profusely, to make it out the door hail first responders,” his father said. Josh gave a description of the shooter and his location.

Josh wasn't armed at the time of the attack, according to various reports. “My brother was an expert marksman,” Adam, his brother, said in the Fox News segment. “He was well-qualified to have a firearm and defend himself.”

“He had to stand watch without a weapon…I think it hurts even more knowing what a good marksman he was,” Makucevich said. She referenced other military base shootings before adding: “it's not a tragedy at this point, it's a failure on the part of leadership.”

“Josh was unarmed because he was standing watch at a building inside the base, you pass through the armed guards when you enter base,” Brouse said in an email to The Daily News. When asked what the arms situation is like at naval installations like Naval Air Station Pensacola, Brouse replied: “Most likely the same as Naval Station Newport – the guards at the entry gates are armed, and base police are armed.”

“Our security forces do carry weapons, however, weapons are not allowed on the installation,” Kalen Arreola, deputy public affairs officer with Naval Station Newport, said in an email to The Daily News.

“In terms of carrying guns on a base, that is most of the time going to be a big no-no,” Alex Muzzioli said in an email. “There may be some small variations in rules between different bases, but all the ones I've been to do not allow personal firearms, and are extremely restrictive on service rifles and pistols. With the exception of that involve shooting, the only people who consistently carry guns are those that are on a duty that requires it (gate guards mostly, for example), and those who work in the armory (that may pertain more to Marine Corps bases, but should be pretty similar everywhere). Unless you are overseas in a forward deployed area (think a base in Afghanistan or something like that), the majority of people will not be armed, and are not allowed to be armed.”

Asked if the Dec. 6 military base shooting should spark some policy change, Muzzioli wrote: “As somebody who stands similar watches to what Josh was standing, I certainly don't understand the point of standing them without anything to defend yourself / use against someone if the need arises. So yes, being able to carry a firearm would make sense to me.”

But Muzzioli said the Dec. 6 shooting underscores a “bigger problem”: the training of some foreign militaries on U.S. military bases when historic, political tensions exist. The FBI has said it was operating under the assumption that the attack was an act of terrorism, according to an Associated Press report; the perpetrator was undergoing flight training at Naval Air Station Pensacola, where members of foreign militaries routinely receive instruction.

He stressed that his opinions are his own and don't reflect those of the Navy, Naval Academy, the U.S. Department of Defense or any other affiliation.

Regardless of the policies in place at the time, death touched the base that day. But Makucevich insisted that Watson is not a victim.

“Victims are passive,” she said. “Josh was a hero.”