Kentucky Air National Guard Special Ops Tech. Sgt. Daniel Keller is set to receive the nation's second-highest award for valor, the Air Force Cross, on Friday for his heroism in helping to medevac fallen troops during that battle in Afghanistan's Nangarhar province 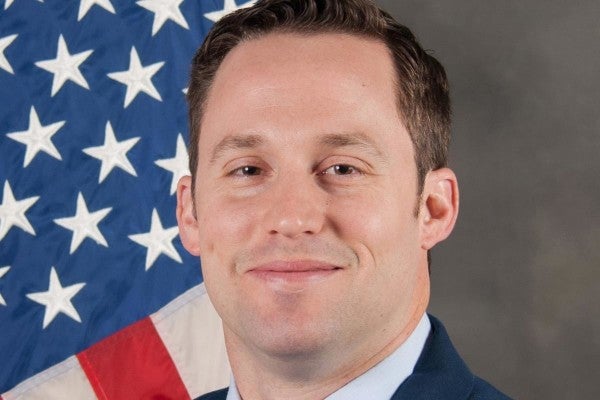 “It's a given; that's what you do,” he told Military.com.

Keller is set to receive the nation's second-highest award for valor, the Air Force Cross, on Friday for his heroism in helping to medevac fallen troops during that battle in Afghanistan's Nangarhar province.

“It's a necessary task that has to occur to get your friends the help they need,” he said. “Whoever's available, they're going to do it.”

On Aug. 16, 2017, in a stronghold of the Islamic State offshoot known as Islamic State-Khorasan, or ISIS-K, the task belonged to Keller.

As a Joint Terminal Attack Controller, or JTAC, he had the skills for the job and the determination to do it, despite an earlier bomb blast that killed four, wounded 31 and left him with what would later be diagnosed as a traumatic brain injury.

He checked out the terraces on the valley wall and ran to one where he thought the “'60s,” meaning Black Hawk helicopters, could land. An explosive ordnance disposal specialist joined him to sweep the terrace for mines.

Then, he returned to the fight to suppress fire from enemies in well-concealed positions and call in fire from AH-64 Apache gunships and F-16 Fighting Falcons to allow the helos to land, Keller said in a phone interview Thursday.

On Friday at the Kentucky Air National Guard Base in Louisville, Air Force Chief of Staff Gen. David Goldfein will give Keller the Air Force Cross for “extraordinary heroism while engaged in action against an enemy of the United States.”

“His personal courage, quick actions and tactical expertise whilst under fire directly contributed to the survival of the 130 members of his assault force, including 31 wounded in action,” states the medal citation for Keller, 34, originally from Carlisle, Pennsylvania.

An all-day fight against ISIS

In a news release, the Kentucky Air National Guard said that Keller, then a staff sergeant with the 123rd Special Tactics Squadron, was part of an assault force of 130 from Combined Joint Special Operations Air Component Afghanistan on a mission to clear ISIS-K fighters from a valley near the Pakistan border.

Keller said there were more than 30 U.S. troops on the mission in trucks and on foot; the rest were partnered Aghan security forces — split up into two teams on either side of the valley. For overhead support, they had Apaches, F-16s and an MC-130 gunship.

From the outset, and for the next 15 hours, they were in near-constant contact with the enemy and taking fire, he said, testifying to the resilience of ISIS-K despite major air and ground attacks launched against it by the U.S. and the Afghan National Army.

“These guys were dug in, dug in really well,” Keller said of the enemy.

In April 2017, a U.S. airstrike used the largest non-nuclear bomb in the arsenal, the 11-ton GBU-43/B Massive Ordnance Air Blast (MOAB), with the goal of destroying tunnel complexes used by ISIS-K in the Achin district of Nangarhar province.

The bomb was dropped from the rear cargo hatch door of an Air Force Lockheed MC-130. Afghan officials later reported that 96 ISIS-K militants, including four commanders, were killed in the strike, but ISIS-K remains a threat and continues to claim responsibility for suicide attacks in Kabul and elsewhere.

The ISIS presence in Nangarhar was such that Keller, who was on his second tour in Afghanistan, said he spent the majority of his time in the field fighting them.

Previously, he had spent 30 days in the field and was on the 55th day of a second time in the field when the order came to assault insurgents in the valley. “That entire spring and summer, it was just one continuous fight,” Keller said.

Along the way to what they believed to be an enemy compound on the valley floor, Afghan troops would point out to him houses they once lived in, which were now occupied by ISIS-K, he said.

“It was super-crazy,” Keller said. The Afghans, he said, would come up to him to say, “Over there, that's my house.”

In a search of a structure within the compound, what is believed to have been an improvised explosive device went off, killing four members of the assault force and wounding 31, according to the Kentucky Air Guard release.

Keller said a member of the assault force standing directly in front of him was hit by shrapnel, while he himself was knocked back by the wave of the blast but was not hit by the fragments.

“Everything just sort of went black,” he said of the blast. “Initially, I thought I was blinded. Then, all right, I'm not blinded. You assess yourself, make sure everything still moves. Two guys next to me did the same thing.”

His next focus was on getting a head count to determine “who's hurt, who can still fight,” and on getting the Afghans coordinated. “Hey, man, I need you firing in that direction,” Keller said he shouted.

One of the four killed was Staff Sgt. Aaron R. Butler, 27, a member of the 19th Special Forces Group (Airborne) based at Camp Williams, Utah, according to the Defense Department.

The other three were Afghan partners. Keller said he later learned that two more of the Afghans had died from their wounds.

The assault force now faced an enemy estimated to number about 350, according to the release.

“Injured and struggling to his feet, Keller executed air-to-ground engagements while returning fire, repulsing an enemy assault less than 150 meters away,” the citation states.

He then helped move 13 critically wounded casualties to a helicopter landing zone “under a hail of enemy fire,” according to the citation.

“When medical evacuation helicopters were unable to identify the landing zone, he sprinted to the center of the field, exposing himself to enemy fire in order to marshal in both aircraft and aid in loading casualities,” it adds.

“We had to make it work,” Keller said. “All the while, we were suppressing enemy fire.”

In calling in airstrikes and medevacs simultaneously, Keller was also working against what he called the “thermal crossover” when dusk sets in and temperatures go down, making it more difficult for aircraft to pick out targets using infrared imagery.

“It can make you not fully utilize the air players on station,” he said.

The order came to withdraw.

“As the remaining U.S. forces departed the area, Keller repulsed a three-sided enemy attack by returning fire and passing enemy positions onto another joint terminal attack controller, allowing friendly forces to break contact with the enemy,” the citation states.

“We kinda fought our way out,” Keller said.