The White House planned to build the wall with $3.6 billion redirected from military construction projects. 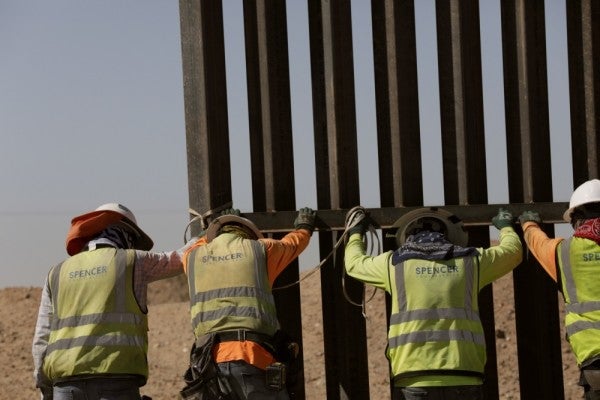 A federal judge in El Paso has issued a nationwide injunction against the Trump administration's use of military construction funds to build a border wall.

U.S. District Judge David Briones said in a memorandum filed Tuesday that funds appropriated by Congress to the Department of Defense for construction projects can't be diverted to build a border wall.

The injunction blocks the administration from using up to $3.6 billion it planned to reallocate from military construction projects.

However, the judge's order doesn't prohibit the administration from using up to $2.5 billion in Department of Defense funding originally earmarked to support counter-drug activities.

“It is prohibiting the use of the military funds that were illegally diverted by the president's declaration,” said Fernando Garcia, executive director of the Border Network for Human Rights, which, along with El Paso County, sued President Trump and members of the administration over the wall funding earlier this year.

“Right now, the court has prohibited the use of more than half of that redirected money,” Garcia said. “(Trump) went above Congress by redirecting those funds. For us it's an important victory.”

In October, Briones ruled that Trump's February proclamation of a national emergency at the border violated federal law, as did the administration's decision to divert military funds to pay for construction of a wall.

In New Mexico, funds diverted from the DOD counter-narcotics operations are currently paying for 46 miles of 30-foot fencing now under construction in Luna County. Those funds are not affected by the injunction, so construction is likely to continue.