Scum Stole A Precious Memento Of His Slain Son. It Mysteriously Came Home For July 4th

Every Tuesday, Shawn Marceau visits his son’s grave in the veterans section of Tahoma Cemetery in Yakima, Washington State. As... 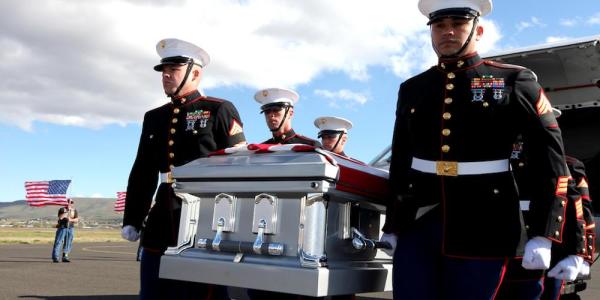 Every Tuesday, Shawn Marceau visits his son’s grave in the veterans section of Tahoma Cemetery in Yakima, Washington State.

As he drove there on his lunch break Tuesday, something caught his eye.

“I drive up and I see a flag on Joe’s grave,” he said of the final resting place of his son, Marine Lance Cpl. Joe Jackson.

Marceau assumed it was just an ordinary American flag someone had left on the grave. But when he picked the flag up, he noticed it was folded oddly.

“I went and lifted it and it was folded a little bit, it had a different crease in the fold,” he said, “So I peeled it back and a saw (a signature) and my heart dropped.”

It was the flag stolen from him earlier this year — a flag made all the more precious because it had been signed by Jackson and Marines in his platoon.

Jackson was 22 when he was killed April 24, 2011, by an improvised bomb while conducting combat operations in the Helmand province of Afghanistan. Jackson had the flag over his bed before he went out on his last patrol.

Local Marines fold flags for Lance Cpl. Joe Jackson’s family during his funeral May 4 at Tahoma Cemetery. Jackson was killed April 24 by an improvised explosive device blast in Afghanistan in 2011.

In April, the flag and other items were stolen when someone broke into Marceau’s truck, parked at his home in White Swan. And then, the day before the Fourth of July, it lay in front of his son’s headstone with no note.

“There’s no rhyme, no reason, no nothing,” Marceau said. “It’s just a random act of kindness in this crazy world we live in right now.”

“Somebody finally did something to restore our faith in humanity a little bit.”

After searching for the flag locally, Marceau posted on Facebook in May pleading for the public’s help. His post was shared more than 108,000 times by users, some as far away as Florida and Maryland.

Officers at some local law enforcement agencies — including the Yakima County Sheriff’s Office, Toppenish Police Department and Yakama Nation Tribal Police — told Marceau they made sure to keep an eye out for the flag when patrolling, he said.

“Every time they would go into a place they told me their head was on a swivel,” he said. “After they got the crook or whatever was going on, they were looking for a flag real quick.”

And that was just the police departments, Marceau said.