How the US military helped create the Juneteenth holiday 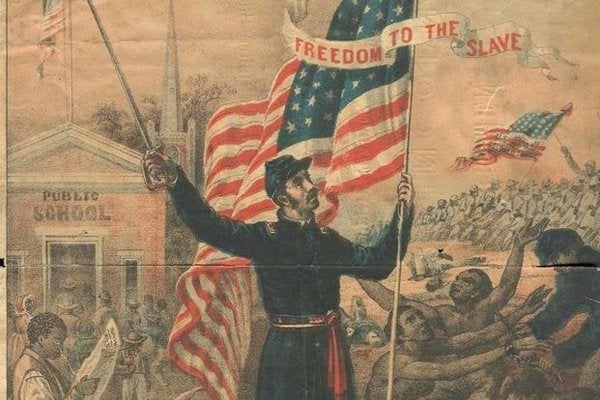 One of the federal government's first attacks on slavery during the war was an “Act to Secure Freedom to All Persons Within the Territories of the United States,” passed on June 19, 1862.

Exactly three years later, Gen. Gordon Granger would sail into Galveston, Texas, to read the Emancipation Proclamation to the people of Texas.

The day would become known as “Juneteenth” and would be celebrated as a holiday —‚ a second independence day — for former slaves.

On June 19, 1865, Granger read the words written by Abraham Lincoln in 1862. Texas was the last state in the defeated Confederacy to hear them.

“All persons held as slaves” within the rebellious states “are, and henceforward shall be free … ” and “the executive government of the United States, including the military and naval authorities thereof, will recognize and maintain the freedom of said persons,” it read.

According to the National Juneteenth Observance Foundation (NJOF), that day was the first “Juneteenth” and began the oldest nationally celebrated commemoration of the ending of slavery in the United States.

In the years that followed, it was Texas that first celebrated the anniversary as a holiday. Since then, legislation has been passed to recognize the day as a state holiday or observance in 46 states and the District of Columbia.

Lincoln's executive order didn't end slavery in the United States. It did mean that when the Union Army came rolling into a Confederate-controlled area, the slaves in that area would be set free.

Even though the Civil War brought the end of slavery in the former Confederacy, there were four “border” states where slavery was legal but that did not secede from the Union: Delaware, Maryland, Kentucky and Missouri.

The western counties of Virginia held a convention at the onset of the war, voting to break away from Virginia, form their own state and join the Union. The new state of West Virginia became an important border state — though contributing significant numbers of troops to both sides of the war — and it was the last admitted slave state.

The “peculiar institution” itself wouldn't technically be abolished until the passage of the 13th Amendment on Dec. 18, 1865, ratified by the required three-quarters of states. President Lincoln signed the bill after it was passed but would not live to see its ratification

In 1861, the newly elected President Lincoln wasn't seeking to abolish slavery from the United States. He did want to check the spread of slavery to new states, especially those carved from territories in the American West.

Southerners in what would later become the Confederacy saw the writing on the wall, knowing that they would eventually be in the minority in Congress and would soon lose the cornerstone of the Southern economy.

Time was not on their side, and the election of Lincoln in 1860 forced the Southern states' hands. In order to keep slavery legal, they would have to secede and form their own country.

As the war dragged on, the government in Washington knew it would have to move to end slavery in the United States. Lincoln needed a great victory in order to announce the Emancipation Proclamation — and Gen. George B. McClellan gave him that win at Antietam in September 1862.

Three days after the battle, Lincoln warned the Southern states that they had 100 days to return to the Union, or the Union Army would emancipate slaves everywhere in the South they could reach. When the deadline on Lincoln's ultimatum lapsed, it had the dual effect of keeping external powers, such as Great Britain, from intervening for the slaveholding Confederacy and depriving the South of manpower.

In July 1862, the Federal Congress, realizing the need for more men in uniform, passed the Militia Act, recognizing the “indispensable military necessity” of recruiting African American men for the North. The act allowed the president to recruit former slaves for the Union Army.

Recruiting began in earnest in January 1863, after the South failed to heed Lincoln's ultimatum. Some 175 regiments comprising more than 178,000 free blacks and former slaves joined the newly formed United States Colored Troops' regiments, making up 10% of the Union Army.

United States Colored Troops fought in every major campaign of the war's final two years. Lincoln acknowledged their contribution, saying, “Without the military help of the black freedmen, the war against the South could not have been won.”

Texas, the most distant of Confederate states, was the last to be occupied by Union forces after the Civil War. When Granger arrived in Galveston to read the Emancipation Proclamation to the state, he announced the freedom of an estimated quarter-million slaves, the last slaves in the newly restored Union.

In the days and years that followed, the day became known as “Juneteenth.” The National Juneteenth Observance Foundation calls it a holiday “marked with celebrations, guest speakers, picnics and family gatherings. It is a time for reflection and rejoicing. It is a time for assessment, self-improvement and for planning the future.”

Currently, the NJOF has a petition for the U.S. Congress to recognize Juneteenth — marking the official end of slavery in the United States —as a national day of observance equal to Flag Day.