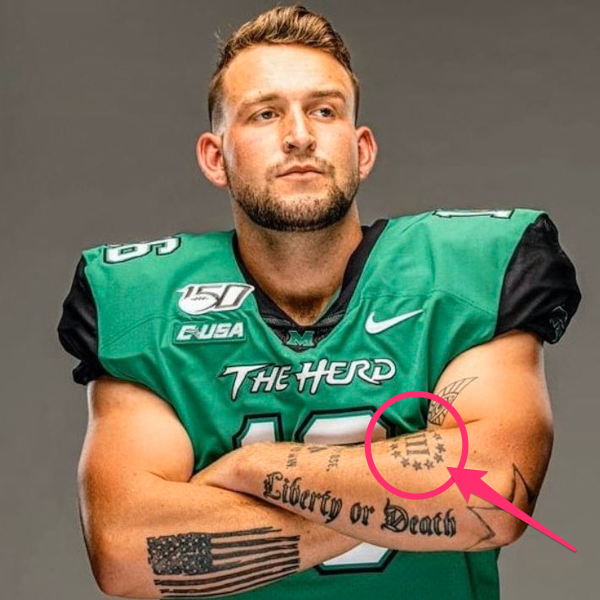 Patriots rookie kicker Justin Rohrwasser appeared on WBZ-TV in Boston on Monday to express shame and regret over a controversial “Three Percenters” tattoo on his left arm. The fifth-round pick explained that he was going to have the tattoo removed and explained why he had the ink in the first place.

Rohrwasser, who was drafted from Marshall, started his collegiate career at the University of Rhode Island (2015-2016). A look at his Instagram page suggests that he got the tattoo sometime during his two-year stint with the Rams. The tattoo is three roman numerals surrounded by a circle of stars. That is the logo for the anti-government group, which provided security during the deadline rally in Charlottesville, Va.

“As soon as I saw what it was linked to on Saturday, it was exactly that time I knew I had to get it totally taken off my body,” he added. “I said cover it up (to reporters after the draft), but I want to get it removed from my body. It’s shameful that I had it on there ignorantly.”

He told the New England media on Saturday that he comes from a military family and wanted to get tattoos to honor the military. Rohrwasser has multiple on his arms. He has an American flag on his right forearm. On his level arm, he has the words “Liberty or Death,” among other tattoos.

Rohrwasser said that he didn’t know how controversial the tattoo was until after the Patriots drafted him. At the time, someone cropped the photo and tweeted it next to the group’s logo. The photos went viral.

“We were celebrating and hugging. So happy. I went on to Twitter. I saw someone posted a picture of me and my tattoo and linking me to some horrific events, obviously Charlottesville, and these horrible things,” Rohrwasser said. “The first time I found out what it was linked to was Saturday. That’s why it was so surprising.”

The Patriots made Rohrwasser, from Clifton Park, N.Y., the top kicker in the 2020 NFL draft. Last year, he was named the Conference USA Special Teams Player of the Year. He said after the draft that he talked a lot with Patriots special teams coach Cam Achord and that the team even gave him physiological testing. He’s in line to replace long-time veteran Stephen Gostkowski.

Rohrwasser expressed regret over the situation and apologized.

“I’m sorry for all my (friends) and family that have to defend me. Putting them in that compromising position is one of the biggest regrets I’ll ever have. To them, I’m sorry,” Rohrwasser said. “I’m going to learn from this. I’m going to take ownership of it. This is not who I am. No matter what, that’s not who I am. Hopefully, you will all find that out.”