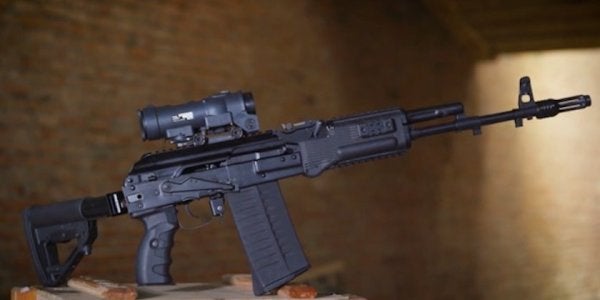 At first glance, the AK-308 appears to be a rebrand of Kalashnikov’s AK-12 with some design elements from the AK-103. But its tame appearance belies what makes the AK-308 one of Kalashnikov’s most ambitious products in decades: it houses 7.62x51mm NATO rounds.

Since the Second World War, Kalashnikov has produced over twenty assault rifles. Of these, all but three have employed Soviet/Russian-made ammunition. The AK-101 and AK-102 with 5.56x45mm NATO rounds were Kalashnikov’s first foray into exporting a rifle with NATO-standard ammunition, but these made a small international splash.

The AK-108, also made for 5.56x45mm rounds, likewise generated little interest from major foreign buyers. The 108 was part of the late AK-100 series line (107-109) that was plagued by recoil inconsistencies, heaviness, and needlessly complicated design.

Two decades later, Kalashnikov is trying again. The AK-308 uses a different NATO rounds— 7.62х51 as opposed to 5.56x45mm—that trades more weight and recoil for better range and penetration capability. The AK-308 is marginally longer and heavier than the AK-12 to accommodate its heavier caliber type. It incorporates many of the AK-12’s improvements, including a collapsible buttstock and redesigned gas tube. The AK-308 uses a firearm frame based off the RPK-74M, a design choice meant to increase durability.

Barring the kinds of quality control issues that plagued early AK-12 test units, the AK-308 should offer better handling and performance. But performance improvements are to be expected, given the two decades separating the AK-308 from the AK 100-series. The question is whether it can improve in a cost-effective way, especially since Kalashnikov is pitching the AK-308 as an affordable alternative to western 7.62x51mm rifles.

Recycling parts of the AK-12’s efficient design is sure to reduce Kalashnikov’s overhead, but it remains to be seen if they can integrate 7.62x51mm rounds while keeping production costs sufficiently low.

There is no indication that the Russian government itself is planning to use the AK-308, either among its military or domestic police. As with the AK-101 and 102 before it, the AK-308 is a near-identical variant of Kalashnikov’s current flagships produced purely for export purposes.

Kalashnikov’s recent push into the export market is distinguished not just by new technology, but by a different business model. Whereas the AK-101 was not produced for anyone in particular, the AK-308 is designed and marketed with a specific buyer in mind: India.

India is a recurring importer of Russian defense technology stemming back to the Cold War period. The Kremlin has been aggressively pursuing the Indian export market, recently signing a $5.43 billion deal with New Delhi that included the sale of five Russian S-400 surface-to-air-weapons systems and four Russian Admiral Grigorovich -class frigates.

But Russia has struggled to sell small arms to India over the years. Kalashnikov was passed up in a recent Indian assault rifle procurement search because, as it happens, the Indian military is looking specifically for 7.62x51mm rifles. The AK-308, then, is an explicit Russian attempt to become India’s primary rifle exporter after a two-decade hiatus of indigenously produced Indian INSAS rifles.

Besides giving Russia a foothold in the lucrative Indian market, a cost-effective 7.62x51mm rifle could tempt other buyers looking for cheap, reliable, NATO-standard caliber arms. Brazil has been mentioned as a prospective client, and even Pakistan has apparently expressed interest.