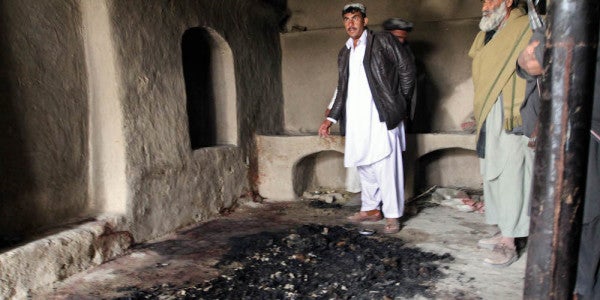 Robert Bales, the former Army staff sergeant who killed 16 Afghan civilians, including seven children, will likely ask the president to commute his life sentence once he exhausts his legal appeals for one of the nation’s most notorious war crimes.

Bales’ attorney, John Maher of Chicago, said earlier this month that if he runs out of options in the courts, he will seek executive clemency from the president.

Bales could face a receptive audience if President Donald Trump still occupies the Oval Office when his appeals are complete. Trump has freed people he believes were treated unfairly by the judicial system, pardoning five, including two for political corruption and infamous Arizona sheriff Joe Arpaio, who was convicted of criminal contempt.

He also pardoned one former service member among the more than 3,000 clemency requests: Former Machinist Mate 1st Class Kristian Saucier was sentenced to a year in prison for taking photos of a classified area of Naval Submarine Base in New London, Conn. Trump pardoned him after Saucier said he had been treated more harshly than others who were accused of mishandling classified information, including former Secretary of State Hillary Clinton and former CIA Director David Petraeus.

Clinton was not charged with wrongdoing, and Petraeus pleaded guilty and was sentenced to 2 years’ probation and a $100,000 fine.

Maher said Bales would likely request a commutation of the life-without-parole sentence “to provide a chance to one day be returned to his wife and children.”

In the early morning hours of March 11, 2012, Bales left his base, Camp Belambay, in Kandahar, armed with an M4 carbine and M9 pistol, and headed to a nearby village, where he killed four people, including a child, and assaulted six others. He returned to base for more ammunition before walking to another village, where he killed a dozen more, mainly women and children, in their beds.

It was his first tour in Afghanistan, following three in Iraq. According to court documents, he had been drinking that evening and taken sleeping pills and also was using anabolic steroids, known to cause mood swings.

He pleaded guilty on June 5, 2013, and was sentenced to life without parole in the maximum-security military prison at Fort Leavenworth, Kan.

Bales’ next step is the Supreme Court. In a petition filed May 19, Bales’ attorneys argued that evidence was withheld during the former soldier’s trial that could have influenced the sentence.

Prosecutors, the petition said, failed to disclose that service members, including Bales, were ordered to take an anti-malaria medication, mefloquine, that is known to cause nightmares, anxiety, anger and psychosis in some patients.

It also alleges that the prosecution failed to divulge evidence that three relatives of Bales’ victims who testified in his sentencing were linked to roadside bomb attacks on coalition forces, according to U.S. military databases, or had been detained as Taliban associates.

“The idea is not so much we want to exonerate Bob Bales,” Maher told McClatchy. “But he’s an American soldier who walked into combat four times. Understandably, there’s going to a breaking point for even the strongest people around, and he deserves every protection the Constitution provides.”

Maher said Bales took mefloquine during a 2003-2004 tour in Iraq and possibly was taking it in Afghanistan in 2012. The malaria drug is known to cause neurological and inner ear problems, including debilitating vertigo, in a small percentage of users. Case studies show it also has caused psychotic behavior and paranoid delusions in some troops.

Related: This Marine-Made War Documentary Is So Raw The Corps Doesn’t Want You To See It »

Maher argued that a 2012 Pentagon memo on undocumented use of mefloquine by troops was not disclosed, nor was an anonymous report from a pharmacist to the FDA that a patient taking mefloquine, presumably Bales, had killed more than a dozen people in Afghanistan.

But Army judges rejected the mefloquine argument as speculative. They also found the argument that prosecution falsely portrayed several witnesses as farmers, rather than known associates to IED events or the Taliban, “unfounded.” The ruling was affirmed by the U.S. Court of Appeals for the Armed Forces in February.

Morse said the defense has misrepresented how mefloquine became an issue, adding that the government disclosed Bales’ medical records and furnished all the information and subject matter experts, including psychiatrists and psychologists, that were requested by the defense team members.

“None of them raised this issue,” he said. “There continues to be zero evidence that Bales was provided mefloquine.”

Morse said the prosecution was aware that one witness, Mullah Baaran had been detained at a facility in Parwan, Afghanistan, but he “takes a pretty significant exception that he was tied into terrorist activities.”

“My recollection is that he spent one day detained at a facility nowhere near Panjwayi, and my recollection is he was rolled up with people working in a poppy field. Saying that he was tied up with terrorist activity — is just wrong,” he said.

Maher’s firm, Maher Legal Services, has already asked the president to pardon former Army 1st Lt. Clint Lorance, who was convicted in 2012 of ordering the shootings of three Afghan men on a motorcycle; two died, including a village elder. Lorance is serving 19 years at the military prison at Fort Leavenworth, Kan.

Maher knows the chance of the court accepting the case is slim. If rejected, he plans to petition the U.S. District Court in Kansas. If those appeals are unsuccessful, he will ask the president for clemency.

“There has to be some measure of institutional responsibility on the part of the nation and/or the Army to recognize that even the strongest, most resilient individuals reach a breaking point,” Maher said. “Then, there’s evidence that may have helped him when they were trying to give him the death penalty. Moreover, we’re depriving his wife and two little kids.”

The Supreme Court likely won’t take the case, said Eric Montalvo, a former Marine Corps attorney who runs a civilian defense firm in Washington and is not affiliated with the case

“When you have an individual who said ‘I killed women and children,’ and tried to burn their bodies because they were evidence, it’s crime and cover-up, which gives you a sense of consciousness. That’s not psychosis,” Montalvo said.

Morse said he would not be surprised if Bales eventually requests a presidential pardon because the original case, in Morse’s opinion, produced few, if any, errors to appeal.

“This case was watertight. From the beginning the goal didn’t include just winning, it included justice, doing right and following the rules.”