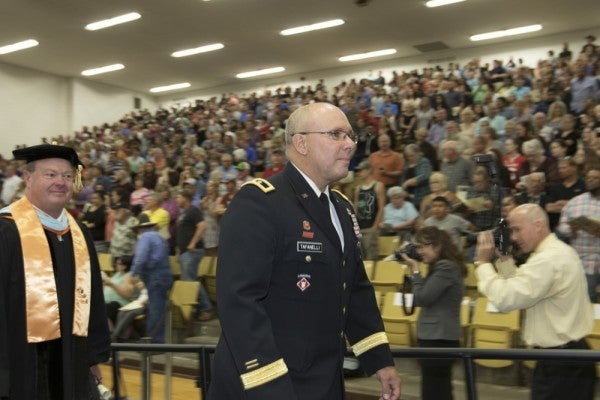 The adjutant general of the Kansas National Guard who both retained the department's top command position in 2017 despite a damaging internal investigation of leadership shortcomings and survived last year's transition to a Democratic governor plans to step down in March, officials said Monday.

Maj. Gen. Lee Tafanelli, a former Republican legislator elevated to adjutant general in 2011 by then-Gov. Sam Brownback, remained on the job after Gov. Laura Kelly was sworn into office in 2019.

Tafanelli's scheduled departure March 31 was referred to by the governor as a “planned resignation.”

He is to start in May as CEO of Kansas Electric Cooperatives, which advocates on behalf of 28 electric distribution cooperatives and several generation and transmission cooperatives.

Kelly said she was grateful for Tafanelli's service to Kansas and the nation and “for his steadfast leadership of such a critical part of our government operations.”

“His efforts have aided Kansans in many ways, to include his direction of the state's response in communities impacted by disasters such as tornadoes, flooding and more recently wildfires,” the governor said.

She said a succession plan for the Kansas Guard would be made public later in January.

In Kansas, the adjutant general possesses responsibility for Army and Air branches of the Guard. The two-star general also administers the divisions of emergency management and homeland security.

Tafanelli's letter of resignation said he was “blessed to work on a team of the most outstanding and dedicated professionals.”

“They work tirelessly to carry out our agency mission, working in public service for a greater cause and have proven always willing to sacrifice to make our state and nation a better place,” Tafanelli said.

In 2017, The Topeka Capital-Journal reported on an internal investigation conducted by officers of the Kansas National Guard into allegations of widespread malfeasance in an organization served by more than 7,000 troops.

Brownback stood by Tafanelli, who has served 39 years in uniform. Tafanelli was brought into the Kelly administration along with Kansas Highway Patrol Col. Mark Bruce, who was forced out in March for failing to respond appropriately to sexual misconduct and domestic violence scandal among KHP's personnel.