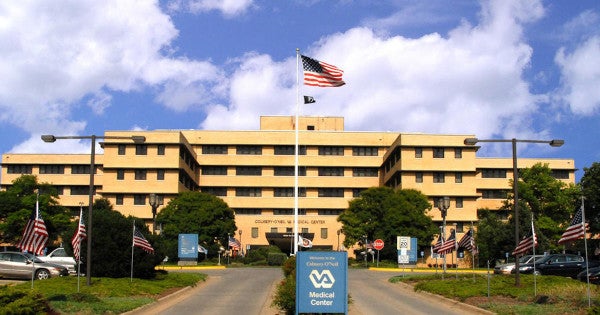 The Kansas City VA Medical Center is still dealing with the fallout of a violent confrontation last year between one of its police officers and a patient, with the Kansas City Police Department launching a homicide investigation.

And now Topeka's VA hospital is dealing with an internal dispute between leaders of its Veterans Affairs police force that raises new questions about how the agency nationwide treats patients — and the officers who report misconduct by colleagues.

Police Maj. Alexander Harris says he was reassigned from his position supervising the Topeka hospital's police force in retaliation for sending complaints about officers up the chain of command.

“I've been very transparent about everything, and now it's like I've been getting some blame, some pushback, some harassment,” Harris said.

Within his first month on the job in Topeka, Harris compiled a memo outlining 27 deficiencies. He said those included VA officers violating veterans' constitutional rights and failing to properly investigate crime allegations.

“We lack training, we lack skills, we lack the people who know what they're doing, and that's dangerous,” Harris told The Star. “And I think that it's my job to find that stuff. … We have guys who probably shouldn't be working and that's what the complaint is about.”

Harris said he reported his concerns to his boss, Andrew Denning, the chief of police for the entire VA Eastern Kansas Health System, but Denning never seemed interested in addressing them.

Instead, Harris said, Denning punished him by stripping him of his badge and transferring him to a new job “helping move cars around” at the Leavenworth VA hospital.

Denning didn't respond to a phone message. VA Eastern Kansas spokesman Joseph Burks did not respond to multiple requests to interview Denning and instead released a prepared statement.

“We are aware of these allegations and will look into them,” Burks said. “The department encourages employees to identify problems and will not tolerate any efforts to retaliate against those individuals. But identifying as a whistleblower — especially after committing clear instances of misconduct — doesn't shield someone from accountability when they have failed to uphold VA's values.”

Harris, who is in talks with a lawyer, said the only misconduct allegations against him he's aware of came from Denning and were without merit.

He provided a June 27 reprimand letter from Denning that accused him of failing to complete paperwork, making “inappropriate comments” about the VA police force's quality and going on leave without following proper procedures.

He also provided a July 19 letter, signed by Denning, rescinding those complaints after Harris filed a rebuttal with the VA's human resources department.

Burks did not respond to a follow-up email asking if there were other misconduct allegations against Harris.

Harris emailed Burks asking about the statement he gave The Star and received this answer:

“(The) response makes no indication of any single individual or names any single employee. It refers to anyone identifying themselves as a whistleblower and is a general statement regarding the accountability and the standards of any whistleblower in any organization.”

Harris said he has no knowledge of what happened at the Kansas City VA — where Dale Farhner, a 66-year-old veteran, was left nearly comatose after an encounter with VA police in the hospital's parking lot last year and died of a brain hemorrhage a few days later.

But he said his experience is that many officers in the VA system lack training, and the VA police force is less interested in improving than it is in punishing anyone who questions the status quo.

“At the end of the day, I'm looking at losing my job for being honest,” Harris said. “If these guys are not meeting the standards, then why are they working?”

VA police forces nationwide have been under increased scrutiny since December, when the agency's internal watchdog, the Office of Inspector General, released a scathing report stating that the VA's 4,000 police officers operate with little federal accountability or guidance.

Harris, a U.S. Navy veteran, said he found that to be true when he took the job in Topeka in October.

He had law enforcement experience in both the VA — at hospitals in Los Angeles and Durham, North Carolina — and in a major municipal police force in Long Beach, California. He said he began a full audit of the Topeka VA police force's operations almost as soon as he took over as supervisor.

After about a month he compiled the memo outlining 27 deficiencies, including five that he deemed “major.”

Most were procedural, such as inaccurate training records and officers not properly transporting loaded VA firearms from the hospital to the shooting range.

But Harris said he also documented infractions related to how the 17 officers at the Topeka VA treated the veterans who came to the hospital.

In one incident officers were called to the hospital's recreation hall — where veterans can shoot pool or hang out — because one veteran had slapped another on the cheek and ear. The veteran admitted to the slap, but said he did it because the other man was looking at child pornography on a computer.

The officers took the slapper into custody for battery, but Harris said they made a number of basic errors in the process. For one thing, they never read him his rights.

“Now we have a constitutional issue,” Harris said.

“He was down there about four hours, which is well beyond what they're supposed to do in the holding cell,” Harris said.

In his written report of the incident, the officer said he told the veteran, “If he was going to cooperate I would handcuff one hand to the bench to make it a little more comfortable and maybe later we would leave him in the room without handcuffs if he cooperated with the door secured.”

They also searched the veteran's backpack for contraband without a warrant or his express permission, finding nothing.

The veteran who got slapped wanted to press charges, but Harris said the shoddy police work made it impossible to bring a case.

Playing by the rules

Harris said some of the things he documented would never fly in a regular municipal police force.

“What would happen if we were Topeka police and we did some of these same things?” Harris said. “Would they be fired? Would there be a lawsuit?”

But the federal bureaucracy of the VA system shields its officers, he said, and although VA officials say they want to protect whistleblowers, their actions don't match their words.

Harris said that a few months after he reported his concerns to Denning, Denning told him he was under investigation for undisclosed reasons.

Denning took his badge and reassigned him to the engineering department at the Leavenworth VA hospital, where Harris said he basically just does odd jobs like moving the department's vehicles.

“The chief did that as a form of punishment,” Harris said.

Milton Thomas, Harris' boss when he worked for the Long Beach police department from 2006 to 2009, said Harris was “an outstanding police officer” during that time.

“As a supervisor I never had to discipline him or even talk to him,” said Thomas, reached by phone. “What we call 'verbal counseling,' we never had that. He was playing by the rules when he was working with me.”

In addition to talking to a lawyer, Harris said he sent letters to both Rudy Klopfer, the head of the VA Eastern Kansas Health System in Topeka, and Robert Wilkie, the VA secretary in Washington, D.C.

“If I'm being punished for being a legit, legal police officer,” Harris said, “then I have a problem with that.”