Gold Star mother Karen Vaughn, who spoke at the 2016 Republican National Convention about the death of her Navy SEAL son in... 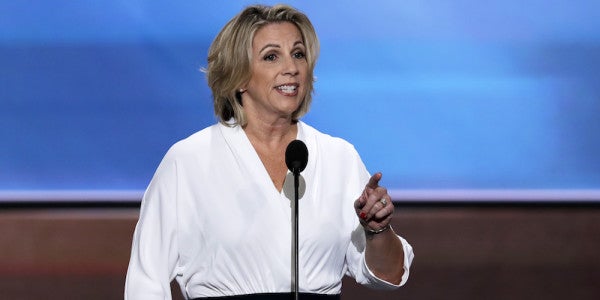 Gold Star mother Karen Vaughn, who spoke at the 2016 Republican National Convention about the death of her Navy SEAL son in Afghanistan, is considering a GOP primary challenge to freshman Congressman Rep. Brian Mast, Republican from Palm City.

Mast has irked some conservatives by proposing a ban on military-style “assault weapons” after the Feb. 14 massacre at Marjory Stoneman Douglas High School in Parkland. Vaughn didn’t mention specific issues on Wednesday, but told The Palm Beach Post she’s been encouraged to run in Mast’s Palm Beach-Treasure Coast District 18 and expects to announce a decision soon.

“I’m going to release a press release next week about this…That’s really all I can say right now,” said Vaughn, a Stuart resident.

A Mast spokesman didn’t immediately respond to a request for comment.

Mast is a decorated Army combat veteran who lost both his legs and a finger after a bomb blast in Afghanistan. He campaigned as a Second Amendment supporter in 2016, but said in a Feb. 23 New York Times op-ed that Congress should define “what constitutes an assault or tactical firearm” and ban future sales of such weapons.

While Congress works on that legislation, Mast said he wants President Donald Trump to “implement an immediate pause” on the sale of AR-15-style weapons, which were used in the mass shootings in Parkland, Las Vegas last year and the Pulse Nightclub in Orlando in 2016.

Conservative commentator Dan Bongino, a Mast ally in the past, called Mast’s proposal “a grossly misinformed position which requires a response from liberty-loving voters in CD-18” in a Feb. 25 tweet. But Bongino, who has made previous runs for office in Florida and Maryland, said he wasn’t interested in challenging the incumbent.

Karen Vaughn has become a popular author and speaker since her son, Aaron Vaughn, was killed with 29 others in 2011 when their helicopter was shot down in Afghanistan. On the opening night of the 2016 GOP convention, Vaughn said her son died because of restrictive rules of engagement placed on the military while Barack Obama was president.

“There is no adversary the U.S. military cannot defeat if we unbind them from the restrictive, ludicrous rules of engagement they’ve been forced to fight under for the past seven years,” Vaughn said in her convention speech. “We have lost the will to defend ourselves against enemies who are hell-bent on destroying us because we have been unwilling to lead with strength.”

Vaughn and Mast are among the speakers scheduled to appear at an April 15 tea party rally in Wellington.