This Navy captain fled Iran as a child. Now he’s preparing to return at the helm of an aircraft carrier 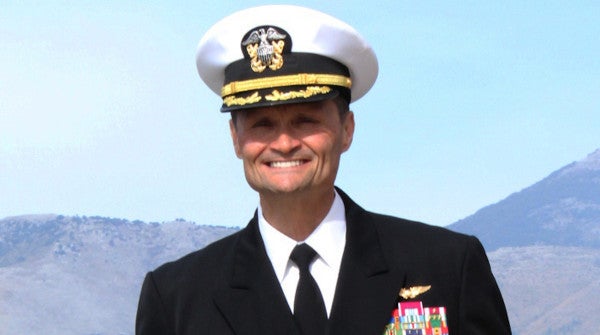 NORFOLK, Va. — The new skipper of one of America's aircraft carriers fled Iran as a child.

Now, he's preparing for a deployment that could take him back to the region at a time of heightened tensions between the two nations that helped mold him into who he is today.

Capt. Kavon Hakimzadeh took command of the USS Harry S. Truman in July, achieving a goal he set for himself 30 years ago after he first laid eyes on an aircraft carrier in Norfolk. Back then, he was a young sailor who'd joined the Navy straight out of high school to serve a country he had only lived in for about a decade.

His journey from Tehran to enlisted sailor to an officer in command of the ultimate symbol of American seapower is a story that he believes serves as a testament to the opportunities the United States provides.

Hakimzadeh (pronounced Ha-KEEM-za-day) was born in Texas to an American mother and an Iranian father, but moved to Iran when he was still a baby. He fondly remembers his childhood there during the 1970s.

He attended an international school where they spoke Farsi and English, kept the faith of his Southern Baptist mom and had uncles and cousins who lived nearby. At the time, Iran was pro-American and embraced many aspects of Western culture.

It was, as Hakimzadeh says, an “idyllic” childhood.

But that quickly changed during the Islamic Revolution in 1979.

He and his family were forced to flee to America when he was 11, his sister was 9 and his mother was seven-months pregnant. They were rushed onto an airplane as the airport was about to close, destined for a small town near Hattiesburg, Miss. where the son of one of his father's business partners had agreed to take them in.

He said the weeks leading up to their departure were very much like the opening scenes in the 2012 Ben Affleck film “Argo,” which is based on the true story of the CIA's efforts to rescue six Americans who were hiding in the Canadian embassy in Iran after the revolution.

“It just happened to be a country in chaos, a country in revolution. And so as an 11-year-old it was a little traumatic to have life as you know it completely change like that,” Hakimzadeh said. “I think it is probably a lot to do with why I decided I wanted to serve and wanted to be in this line of work.”

Hakimzadeh enlisted in the Navy to take advantage of the opportunities the military provided and give back to a country he and his family love for all it's done for them.

“Coming from the experiences we dealt with as a family … They've seen the alternative,” he said. “They strongly support what I do.”

Hakimzadeh is now preparing for the possibility that he could be called to return to the Middle East. His carrier strike group has already completed its last major pre-deployment exercise.

While the Navy doesn't disclose where its ships plan to go or when, aircraft carriers are frequently used as a highly-visible deterrent when tensions flare up around the world. The aircraft carrier USS Abraham Lincoln is currently in the Middle East serving that purpose after Iran shot down an American drone and seized foreign oil tankers.

If the Truman is called to take the Lincoln's place in the region, Hakimzadeh said he and his crew are prepared.

“There's not some particular personal angst involved,” he said. “I've deployed there multiple times in the past.”

Hakimzadeh, whose call sign is “Hak,” spent much of his career as an E-2 Hawkeye flight officer based in Norfolk. He's flown in combat zones in Iraq and Afghanistan and has completed eight operational deployments on seven different ships, earning the Bronze Star and Legion of Merit.

While he knows his last name is uncommon in the United States, in some ways it helps serve as an icebreaker when he's deployed in the Middle East working with U.S allies or during port visits. Hakimzadeh still speaks a little Farsi and is always happy to tell his family's story to those who want to know more:

“I love to tell people that it's a testament to our merit-based Navy that a kid at 19, 20 years old can look at these things and go, 'You know what? I want to command those one day.' And it's certainly a testament to the United States of America that a guy named Kavon Hakimzadeh can do that.”