The window behind Tech. Sgt. Shawn Roberge’s computer at Fairchild Air Force Base reveals a shop arranged with metal fabrication... 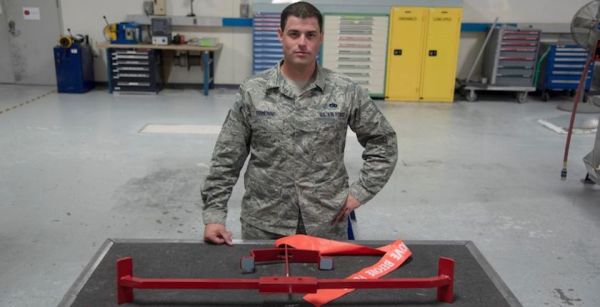 The window behind Tech. Sgt. Shawn Roberge’s computer at Fairchild Air Force Base reveals a shop arranged with metal fabrication machines and tools he uses to tinker with parts for an old KC-135 Stratotanker.

“We have aging aircraft with a retirement date being pushed further and further back,” he said. “As they become older, we’re running across bigger jobs.”

But Roberge, section chief of the aircraft structural maintenance shop, has been empowered by recent efforts in the Air Force that encourage inventive thinking.

In his shop, he developed a mechanism to hold the landing-gear doors closed on the nose of the massive military plane, a 1950s-era fuel-transportation aircraft. The problem persists with every KC-135. According to Roberge’s calculations, he could save the Air Force about $1.5 million if his invention was used on every one of the 431 Stratotankers still in commission.

It’s a drop in the bucket for the Air Force’s $156.3 billion budget, but it shows that the branch is encouraging its members to innovate.

“The Air Force is empowering our airmen to think outside the box,” Roberge said. “In the past, you couldn’t do that.”

When the plane is in flight and preparing to land, two doors open on the bottom of the plane’s nose, and out spring the landing gear and its wheels. But when the plane is being taxied around the air base for repair, the doors must be held shut.

The old technology hasn’t changed since the plane was commissioned in 1956, Roberge said. Crews have been using a webbed strap to keep the doors closed.

But crew chiefs, the repairmen of the aircraft, struggle with it, Roberge said, because it causes the edges of the doors to snag and peel back the sheet metal. Each time it happens, it causes about $3,500 in repair time and material costs.

It doesn’t have a name, he said, because he’s not sure that he’s allowed to name it. But for now, he calls it the nose landing gear door lock.

The invention is made of three aluminum arms connected by hinges. Two arms secure it to the underside of the wheel well of the aircraft’s nose, and the third arm hangs down below the doors. When Roberge swings the doors up, a latch on the third arm locks them into place.

“It’s very simple,” he said. “I can give it to you and you could probably do it without any instructions.”

Roberge’s interest in engineering began with a foray into car engines in the third grade when his dad bought him a car for his birthday.

“It didn’t run, but he bought it for me to tear apart,” he said.

Now Roberge is close to earning a bachelor’s degree in structural engineering from Eastern Washington University.

Born and raised in Spokane, he’s been stationed at the Fairchild for 12 years.

“Being here 12 years, I start to notice problem areas,” he said.

His invention is the first marketable part he’s made for any aircraft, but he’s made “a lot of local little inventions.”

Roberge is flying to Gaylord, Texas, soon to show his invention in a contest called the Airman Powered by Innovation competition. If he wins, he’ll go to Orlando, Florida, for another competition called Air Force Spark Tank 2019.

Two years ago, Roberge would have earned $20,000 from the invention because of a now-scrapped program called the Idea Program, he said. The Air Force is running the Airman Powered by Innovation competition as a similar program without the prize money.

In September, he was filming a promotion video for the invention. Part of it included showing the old strap-based technology, which happened to fail on video; the strap bent the edge of the door well.

He remembers thinking, “It’s cool that you’re seeing this,” he said, “but I’m going to have to have two guys work for three days to repair this.”