Two new KC-46A Pegasus tankers touched down at McConnell Air Force Base on Friday afternoon, marking a major milestone for the base and Wichita after nearly two decades of high drama, uncertainty and delays. 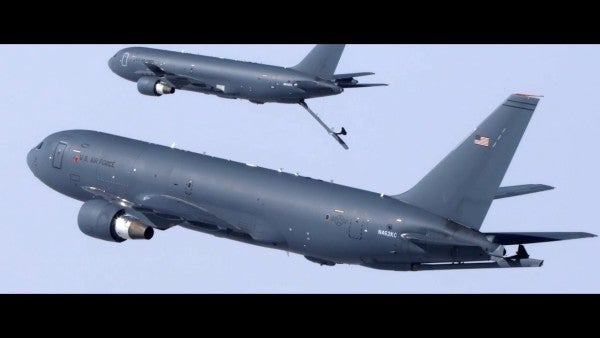 Two new KC-46A Pegasus tankers touched down at McConnell Air Force Base on Friday afternoon, marking a major milestone for the base and Wichita after nearly two decades of high drama, uncertainty and delays.

And two more tankers are on Wichita's horizon next week.

The tankers landed at 2:12 p.m. after a flight from Paine Field in Everett, Washington, where Boeing assembles them.

McConnell is the first base to receive the next-generation tanker. Wichita's base is unique because it is a “total force installation,” housing the active-duty 22nd Air Refueling Wing, reserve 931st Air Refueling Wing and the Air National Guard's 184th Intelligence Wing.

“This is a big deal,” said Lt. Col. Wes Spurlock, squadron commander at McConnell. “It's a game changer.”

Spurlock said having the KC-46 makes McConnell “the tip of the spear” for the U.S. military's refueling efforts and the center of the tanker community for the entire country.

McConnell's economic impact on the Wichita area grew to $617.2 million last year, up $31.1 million from the year before. The base has added $267 million in new construction for the tankers. And it announced in September that it was adding at least 400 positions to support the KC-46.

The KC-46A Pegasus, based on a heavily modified Boeing 767, is basically a flying gas station, railroad car and emergency room all rolled into one. It has more defensive capabilities, more fuel capacity and loads fuel faster than the KC-135, the tanker in service since 1956 that the KC-46 is expected to eventually replace.

Wichita could get as many as 36 KC-46s eventually. But there's still a great deal of uncertainty surrounding the plane, and further delays are expected.

The Air Force accepted the first delivery of the tankers earlier this month despite problems with its remote-vision system, which Boeing has agreed to pay to fix. Boeing has racked up more than $3 billion in charges related to delays.

Secretary of the Air Force Heather Wilson said despite its deficiencies, the remote-vision system, which replaces a first-person-view boom operator on the KC-135, is still an upgrade.

“There's some glint off the cameras in bright sunlight when you're flying directly into or away from the sun,” Wilson said, comparing it to sun distorting back-up cameras on a car.

“All they have to do, operationally, is just turn a little bit away from the sun. It's not that big of deal. But think about this: The hardest time to tank is in the dark and in clouds. So when it's hardest to tank, this aircraft is actually better than what we currently have,” Wilson said.

Boeing expects to build 179 of the aerial refueling tankers as part of a $44 billion dollar deal, but only 52 of those tankers are on contract.

Now defense-contractor giants Airbus and Lockheed Martin have launched a joint venture exploring ways replace the Air Force's aging refueling fleet beyond the KC-46. That presents a challenge to Boeing's stronghold on refueling tanker contracts and adds an extra layer of unpredictability.

Eyes on the skies

Officials have not said when the KC-46 will begin flying on active missions.

McConnell expects to get 18 tankers in the first phase of deliveries from Boeing.

People hoping to see the new tankers should keep their eyes on the skies around Wichita as the KC-46 becomes a familiar sight, said Lt. Col. Phil Heseltine of the 931st Air Refueling Wing Command.

McConnell expects to receive two more new tankers next week. After a two-week pause, more planes will come in “every other week or so” until the first order of 18 is complete. Then there will be a long pause, Heseltine said.

For the first 75 days the new tankers are at McConnell, crews will work to become familiar with the KC-46, “kicking the tires and lighting the fires.” After that comes a six-month test and evaluation period, Heseltine said.

A report by the Defense Contract Management Agency released this week predicts Boeing will not deliver all of its initial tankers until as late as September 2020.

That delay is expected because a U.K.-based Boeing subcontractor, Cobham, is working to meet Federal Aviation Administration compliance on wing-mounted pods that allow the KC-46 to refuel two aircraft at once — one of the new capabilities the KC-46 is supposed to offer compared with the KC-135. The pods were originally scheduled for delivery in August 2017.

Controversy over the tanker stretches back beyond issues with the KC-46.

A first effort to replace the KC-135s came after the Sept. 11 terrorist attacks. Pentagon leaders tried to push through a lease-to-own deal with Boeing for 100 tankers based on the 767.

A deal was struck. But an investigation into the bidding process ended with several resignations and prison sentences for former Air Force and Boeing officials. Boeing paid $615 million in fines.

In a second attempt, Boeing lost the bid to the European Aeronautic Defense and Space Company, the parent company of Airbus, and Northrup Grumman, a military contractor in Los Angeles. Boeing contested the decision, and the contract was eventually reopened.

Boeing landed the tanker contract in 2011 and, less than a year later, announced it was leaving Wichita.

Republican Sen. Pat Roberts, who has been in Congress since 1980, has been along for the ride through the highs and lows of the tanker deal.

“This is special — because we worked so damn hard, with so many different administrations and so many changes of command here,” Roberts said.

“It was a little emotional for me today when that bird came down.”

WATCH NEXT: How The KC-135 Helps 'Fuel The Fight' For The Air Force