Protracted delays on Boeing's new KC-46 tanker could leave the Pentagon with a shortage of refueling capacity, the head of U.S. Transportation Command warned on Tuesday 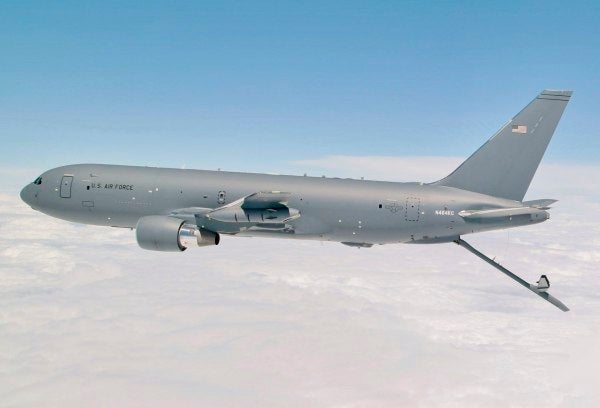 Asked what he would highlight to lawmakers at posture hearings this year, Army Gen. Stephen Lyons pointed to two specific, nagging issues.

“One of them is clearly sealift. We've got to do something about the sealift problem,” Lyons said, referring to
concerns about the fleet of government-owned ships that would be called on to transport troops and heavy equipment in wartime.

The second issue, Lyons said, is the need “to figure out a way to mitigate the delayed fielding of the KC-46,” the tanker aircraft that Boeing has been delivering to the Air Force but that will likely not be ready for combat for several years.

The Air Force owns the KC-46, KC-135, and KC-10 tankers, but Transportation Command, through its Air Mobility Command component, manages aerial refueling operations for the military.

“Because that delay is built in and because … the Air Force had already planned on the retirement of some number of KC-135s and KC-10s, if we're not careful we're going to see a real dip … in taskable tails for the joint force, and so that's the other issue that's very high on my radar,” Lyons said at an event hosted by the Atlantic Council in Washington, DC.

“We're working with the Air Force to retain a capability so that we have continuous coverage to the joint force while we work through the issues we've got to work through in the KC-46,” Lyons said, referring to support for all of the military's branches.

Asked about Lyons' comments, Boeing said on Tuesday that it was “working with the Air Force to build, test and deliver this much-needed capability as quickly as possible.”

'Progress has been unsatisfactory'

A KC-46 Pegasus sits on the flightline at Al Udeid Air Base, Qatar on Nov. 22, 2019. The KC-46 is an aerial refueling and transport aircraft designed to replace the KC-135 Stratotanker.

Boeing won a competition to supply the Air Force's new tanker in early 2011, but because of development and production delays the first KC-46 wasn't delivered until January 2019, more than two years later than expected.

Since then, KC-46s deliveries have been halted
multiple times due to debris found in the planes.

The tankers were also subject to
a three-month ban on flying with cargo and passengers in late 2019, after locks on compartments came unlocked during flight, raising concern that unsecured equipment could damage the plane and harm passengers.

But the KC-46 continues to suffer from several so-called category 1 deficiencies, the most serious kind, the chief among them affecting the “remote vision system,” an array of cameras that a crew member sitting behind the cockpit uses to guide a 59-foot refueling boom to another aircraft and then to monitor refueling.

That crew member's vision can be hindered by shadows or glare, which in turn can lead to the refueling boom scraping up against the surface of the aircraft receiving fuel — a major concern for stealth aircraft, which need their coating intact in order to remain hard to detect.

Air Force Gen. Maryanne Miller, head of Air Mobility Command,
said in September that it would be at least three years before the KC-46 deployed to a combat zone because Boeing had not made progress on issues with the remote vision system over the previous eight months.

“We require your attention and improved focus on the KC-46,” Gen. David Goldfein said in a letter
seen by Bloomberg. “The Air Force continues to accept deliveries of a tanker incapable of performing its primary operational mission.”

Goldfein's letter mentioned the remote vision system, saying that “to date, progress has been unsatisfactory.”

“More than a year has elapsed and Boeing has yet to provide” a design giving “confidence in the way forward,” despite an agreed-upon plan to address it, Goldfein wrote.

Combat testing by Pentagon evaluators also turned up “over 500 deficiencies” as of mid-January, Goldfein wrote, though Boeing
told Bloomberg none of those were in the most serious category.

As of mid-January, the Air Force had
accepted 30 new KC-46 tankers, though they are only partially mission-capable.

But the KC-46's problems have Air Force officials considering
delaying that retirement and pondering help from private industry.

At
an industry day hosted by Air Mobility Command in December, representatives from 14 companies met with Air Force officials to discuss providing air-to-air refueling on a contract basis.

Asked on Tuesday about leasing tankers, Lyons said it was “worth a look.”

“Across TRANSCOM, the aerial-refueling force element is the most stressed and probably the one that's pushing the red line or exceeding the red line,” Lyons said.