After Near-Death Fall 31 Years Ago, A Ranger Finally Gets His Graduation Tab

More than three decades ago, Keith Landry earned his Ranger tab the hard way — the really hard way. And... 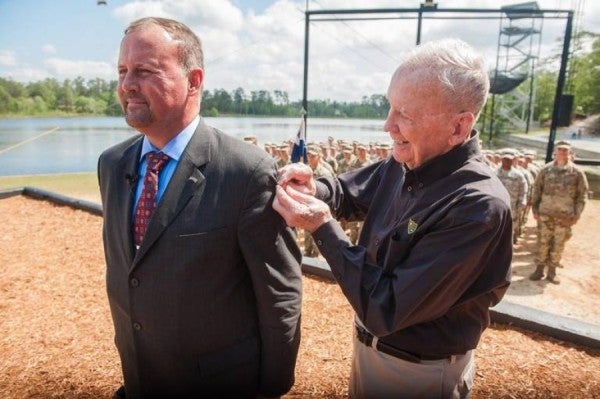 And on Friday at Fort Benning’s Victory Pond, Landry, now a 53-year-old retired colonel, shared his wisdom and experience with the newest Ranger School graduates.

Landry, who in 1986 was a recent U.S. Military Academy at West Point graduate, had completed the all of the requirements to graduate from Ranger School and was on a final mission in the Florida panhandle days before graduation.

Then, the young lieutenant’s life changed in a dramatic way.

“Ranger Landry had no idea boarding the helicopter that morning that he would almost die on Santa Rosa Island, miss his Ranger School graduation and end up fighting for his career after being in a coma for almost a month,” said Airborne and Ranger Training Brigade Command Sgt. Maj. Victor A. Ballesteros, as he introduced Landry.

As Landry was descending the repel rope, there was an issue with the helicopter and a call from the crew to cut ropes. Landry fell more than 60 feet to what could have been his death. His injuries were many, and severe. He suffered a fractured hip, fractured vertebrae and a closed head injury.

The 188 new Rangers who have completed the Army’s most difficult combat training school listened carefully as Landry told of his ordeal at Camp Rudder on Eglin Air Force Base.

“Unfortunately, I never had the honor of standing with my Ranger classmates 31 years ago as you stand with yours now or feeling the immense satisfaction and pride you will feel when you receive your well-earned tabs,” Landry said, not knowing a black and gold tab was going to be pinned on his dark business suit before the graduation concluded. “You get to receive your tabs just as you earned them, as members of a tightly knit successful team.”

Retired Col. Ralph Puckett, a Ranger legend who lives in Columbus, pinned a tab on Landry’s coat. It was an honor Landry did not see coming until minutes before it happened.

“I may be an engineer officer, but I am not unfamiliar with the infantry, and I know of the hallowed ground where we were standing,” Landry said. “And to have Col. Puckett pin the tab on me was incredibly moving.”

It was an honor for Puckett, as well.

“He sets an example for all Rangers — and especially for the young ones coming along,” Puckett said.

The lesson in Landry’s message was the fall did not define him, and moving forward was not a choice but a duty. And that duty was defined in what he did after the fall. Instead of graduation, Landry was transferred to the hospital at Fort Gordon near his Beaufort, S.C., home.

“Memories of my hospital stay are sparse, but pretty vivid,” he said. “I remember a doctor telling me, ‘I don’t know why you are alive.’ I remember seeing my mother, as well as my then fiancée, now my wife, Nia, struggle to provide support to a man who did not know who he was. If you have ever taken a hard hit to the head, you understand what filled my thoughts as I lay in that hospital bed. I knew I was in bad shape, but I did not know how badly I had been injured or even how I had been injured.”

There were two things Landry did know.

Five months after the incident, he was declared 100 percent disabled. Less than a year later he returned to active duty, serving 26 years before retiring in 2011. His final assignment was commander of Louisville District, U.S. Army Corps of Engineers.

Currently he is on the faculty at Georgia Southern University but will leave at the end of the semester and take a job in Fort Lauderdale, Fla., as an assistant Public Works director.

“Ranger Landry is a true Ranger,” Ballesteros said. “He embodies the Ranger Creed through his perseverance, selfless service and continued pursuit of excellence throughout his career.”

“You honor me with your presence,” he said to his classmates. “Trust me when I say, it is a great day to be alive.”

At the end, Landry’s advice to the new Rangers was simple — take the hill.

And their Ranger training provides them with the foundation to take that hill, Landry said.