White House chief of staff John Kelly, a former Marine Corps general whose son was killed while serving in Afghanistan in 2010,... 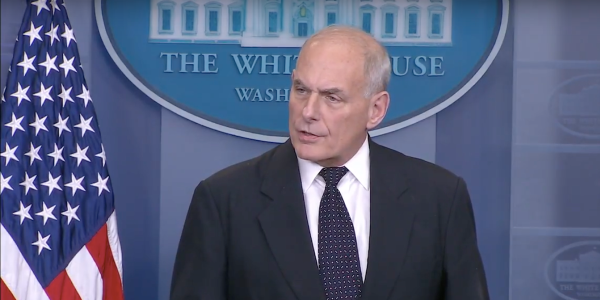 White House chief of staff John Kelly, a former Marine Corps general whose son was killed while serving in Afghanistan in 2010, responded to a firestorm of criticism President Donald Trump faced after a congresswoman alleged that Trump told the widow of a slain soldier that her husband “must have known what he signed up for.”

Kelly defended Trump, saying that there is “no perfect way to make that phone call” to the family of Sgt. La David Johnson, one of four US Army Special Forces troops killed in action during a mission in Niger earlier this month, but that the president intended to commend Johnson's bravery.

“I told him, 'Sir, there's nothing you can do to lighten the burden on these families,” Kelly told reporters at a Thursday afternoon press briefing.

Kelly said he advised Trump on what to say during calls he made to the families of the four troops.

John Kelly slams Rep. Frederica Wilson, says he was “stunned” and “broken-hearted” by her criticism of the call https://t.co/56WEVcUfx7

Rep. Frederica Wilson, a friend of Johnson's family, said she overheard Trump make the controversial remark on a phone call to Johnson's widow, Myeshia, on Tuesday.

On Wednesday morning, Trump accused Wilson of lying about what he said, adding that he has “proof” to support his denial.

“Democrat Congresswoman totally fabricated what I said to the wife of a soldier who died in action (and I have proof). Sad!” Trump wrote.

Wilson responded to Trump's accusation on Wednesday morning, calling the president “a sick man” who “feels no pity or sympathy for anyone.”

Johnson’s mother, Cowanda Jones-Johnson, said on Wednesday that she agreed with Wilson's account of the call.

“President Trump did disrespect my son and my daughter and also me and my husband,” Jones-Johnson told The Washington Post.

Trump doubled down on his denial of the congresswoman's account on Wednesday.

Kelly said he was angered and saddened by Wilson's criticism of the call, adding that he was so upset he had to walk around Arlington National Cemetary for over an hour to collect his thoughts.

“I was stunned when I came to work yesterday, and brokenhearted, when I saw what a member of Congress was doing,” he said. “What she was saying, what she was doing on TV. The only thing I could do to collect my thoughts was to go walk among the finest men or women on this earth.”

Kelly also responded to Trump's suggestion earlier this week that former President Barack Obama did not call Kelly's family after his son was killed in action.

The chief of staff confirmed that he told Trump that Obama did not call him, but said “that was not a criticism” of Obama.

“He asked me about previous presidents and I said, 'I can tell you that president Obama … didn't call my family,” Kelly said. “That was not a criticism. That was simply to say, 'I don't believe President Obama called.'”

Watch a clip below:

John Kelly slams Rep. Frederica Wilson, says he was “stunned” and “broken-hearted” by her criticism of the call https://t.co/56WEVcUfx7