"I was mad ... I was distressed that American soldiers were shooting Americans." 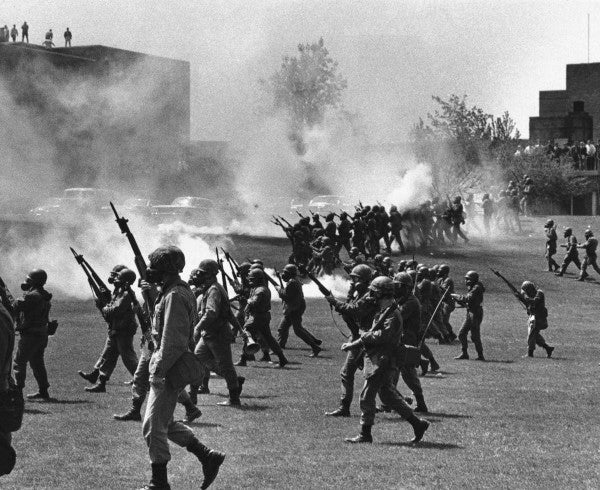 Valley veterans who were active military in posts around the world 50 years ago recall that when they heard about the Kent State shootings there was, among those in their unit, confusion and disbelief that American soldiers had fired upon citizens.

“I do remember being at sea somewhere in the South Pacific when we heard about the chaos at Kent State,” said Buzz Meachum, of Northumberland. “I was a radarman with ties to communications and had seen a radio report of the incident. As best I can remember, I was confused by the story and didn't have enough information to form an opinion at that point. As time passed and we got as much more info as authorities would allow. I remember many of the crew being confused as to how something like this could have happened.”

Meachum said the refrain from a song by County Joe and the Fish was on a lot of their minds at the time.

“'Be the first neighbor on your block to have your son come home in a box,'” he said. “So now, I thought, you don't even have to serve in the war to get killed by it.”

Josef Morales, of Shamokin, served two tours in the Army. Morales said he was in Vietnam in May and didn't learn about Kent State for weeks when he saw something in a newspaper.

“I was mad,” he said. “I was distressed that American soldiers were shooting Americans. I didn't really know what the circumstances were until sometime later. I was never angry over protesters against the war — I was mad at people like Jane Fonda who were supporting the North Vietnamese. I'm a little foggy about those days, but I remember me and the guys, grunts we were called, just didn't understand what was going on at home.”

As someone assigned to the Armored Division of American troops stationed near the Iron Curtain separating East Germany from West Germany at the height of both The Cold War and the proxy Vietnam War in May, 1970, Thom Rippon, of White Springs, in Union County, recalled that “Americans were rioting in large and growing numbers in the days immediately following the Kent State student deaths on May 4.

“The president and his advisors were increasingly concerned with the American nation falling into anarchy and that the movement would become so widespread that the police, national guard and military reserves back home could not handle it,” Rippon said. “They secretly ordered the Pentagon to prepare crack units like ours to prepare to come home hurriedly and help with keeping, or worse yet, restoring social order.

“We ground troops were dumbstruck with the idea of being pulled off the line of defending 'Freedom’s Western Frontier,' but here we were, on the grounds of our caserns (a military barracks), learning the basics of fixing bayonets and marching slowly but firmly forward in a solid line, lock-step, toward our own people.”

The soldiers did not like the idea one bit, Rippon recalled. “Many riflemen openly said that they would not move forward toward their own people and certainly would not open fire if live rounds had been distributed, as was the case with the Ohio National Guard under such poor leadership. And we were a tough, highly disciplined, crack lot.””

The lingering effects of what happened at Kent State were felt by soldiers who had been recently discharged.

”I got discharged in the summer of 1970,” said Sunbury attorney Mike Balducci, “and immediately enrolled to attend Penn State in September. Upon arriving on campus, I realized that myself and other veterans were still perceived as the enemy and had to close ranks to defend ourselves from the rest of the students there!”

Reflecting on those days 50 years ago through today's mindset, Meachum thinks “most people have no idea what influence the '60s had on those of us who lived through it and survived it. It’s kind of like a PTSD of history.

“The majority of us are fortunate enough to remember the good times,” Meachum said, “and still try to not let (the bad times) happen again.”