"He fit right in and is doing a fantastic job." 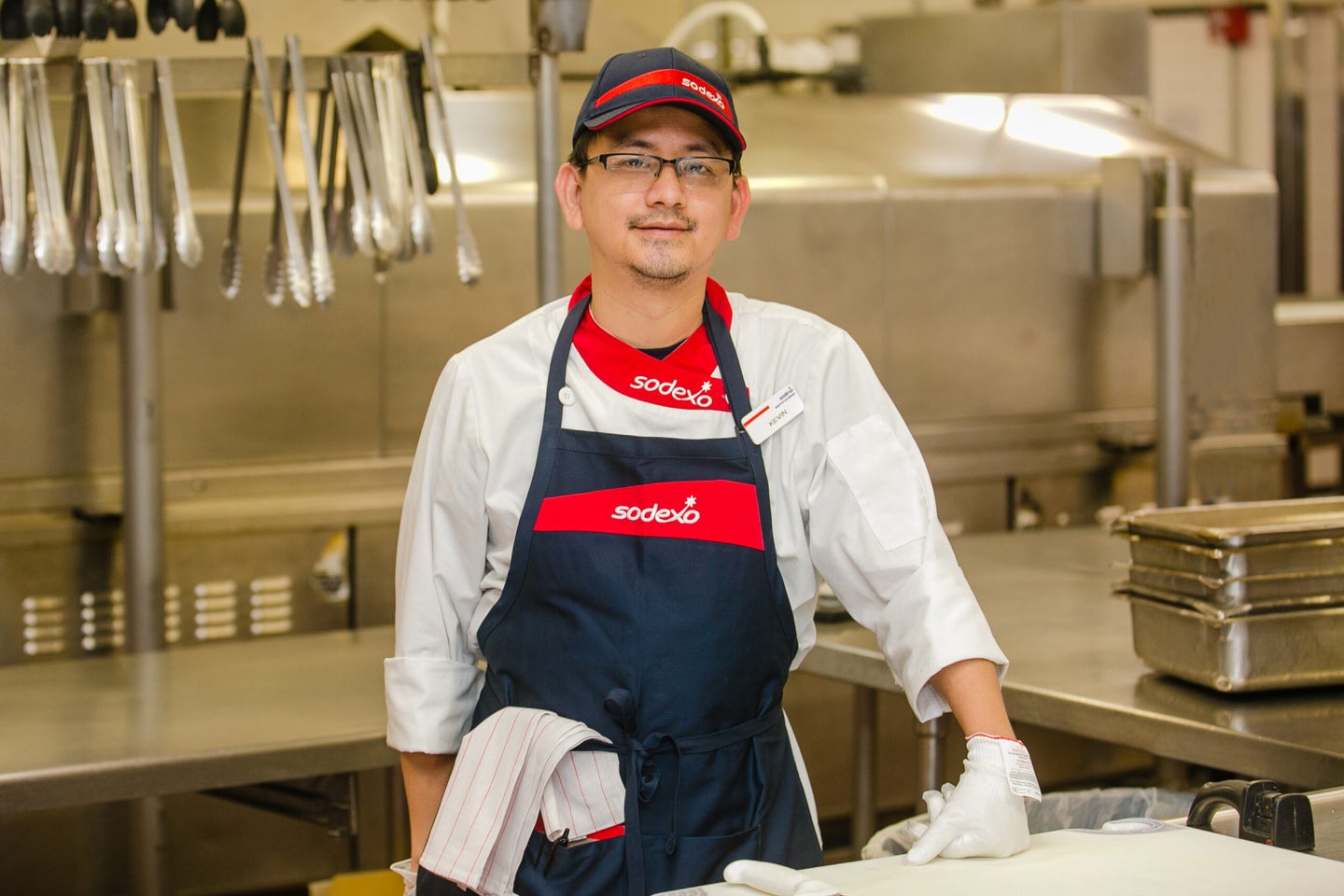 Every day in the mess hall kitchen at San Diego’s Marine Corps Recruit Depot, a culinary team of nearly 30 cooks turns out more than 9,000 meals, making it the Corps’ highest-volume mess hall in the nation.

Working in that high-pressure kitchen requires training, discipline, flexibility and an exceptional work ethic — which are skills that have made newcomer Kevin Tong a standout since he joined the galley crew last week. But there’s something else that makes the 39-year-old San Diegan unique among his fellow cooks at MCRD. He is deaf and blind.

Tong was born deaf and he started losing his vision in his early 30s due to Usher’s syndrome. Today he is legally blind with blurry central vision and no peripheral vision. But with the help of the Helen Keller National Center for Deaf-Blind Youths and Adults and a diversity-hiring program by his employer, Sodexo, Tong said he has found a “dream job” he hopes to keep for the rest of his working days.

Kevin Hollingsworth, general manager for Sodexo’s food service operation at the MCRD mess hall, said the kitchen crew warmed up to Tong quickly this month when they saw what he could do.

“I’m very impressed,” Hollingsworth said. “When we gave him a tour he knew how to use all the equipment. He fit right in and is doing a fantastic job. People were skeptical that he wouldn’t be able to do the job, but he’s been wonderful. The greatest thing about him is he’s very flexible.”

Related: This EOD Tech Was Blinded By A Landmine. Now He’s One Of The Best Swimmers In The World

In order to communicate with his colleagues, Tong carries around a notepad and several felt-tip markers so they can write instructions for him in large block letters. He also has a sign language interpreter to help him speak to others. The long-term goal of the Helen Keller National Center (HKNC) is to help Tong develop more ways to communicate so he won’t need an interpreter long-term.

And when it comes to working with sharp knives and hot cooking surfaces, Tong said he learned in his teens how to avoid cuts and burns in a fast-paced kitchen and those skills — even now that he’s vision-impaired — are so instinctual he rarely has an accident.

Tong was born and raised in Vietnam, where he was the only deaf member of his family. He was 14 years old when he moved with his parents to the U.S. in 1995. The transition to American life was very difficult, he said, because he struggled to learn English and American Sign Language at the same time. He hoped to go to college, but the struggle to communicate led him instead to look for a career that didn’t require a degree.

At age 17, Tong started learning to cook, and he later landed an internship at a local Marriott hotel, where he was taught the basics of cutting vegetables, using knives and following recipes. Later he went on to work in the kitchens at the Hotel del Coronado, the Loews Coronado Bay Resort and San Diego International Airport. He loved the work and people he worked with. But then, around 2011, he started losing his sight.

“The first thing I noticed was my vision was blurry. Then I started to lose my peripheral vision. It was very difficult to read print and see things in front of me. So I went to the doctor and he gave me the diagnosis of Usher’s syndrome,” Tong said. “It was hard. I try to keep a positive attitude, and that helped me to control my emotions.”

When he could no longer read the recipes or recognize certain colors in the kitchen, Tong lost his job and went through an extended period when he couldn’t find work.

According to the HKNC in New York, there are an estimated 2.4 million people in the U.S. with combined vision and hearing loss, and they face significant obstacles to employment. Adults with dual sensory impairment have nearly double the unemployment rate of the general population, and they’re also half as likely to be in the workforce, according to a study by the National Research & Training Center on Blindness & Low Vision.

Helen Keller was blind and deaf, so the HKNC has a special program to serve the needs of this unique population. Over the past decade, it has provided life skills training and career services to 8,000 people and nearly 2,500 families. Tong was invited to train at HKNC New York in 2016, where he said he learned tactile sign language, how to read braille, use a white cane, navigate public transportation, improve personal grooming habits, live independently and follow his creative muse.

But even after he returned to San Diego, where he lives with his elderly parents, Tong said he couldn’t find a job, though he applied for openings frequently. Then in March, all of the culinary job openings evaporated as hotels and restaurants shut down. That’s when Tong reached out again to HKNC for help. He was teamed with Laila-Wendy Chouinard, who is an HKNC job placement specialist for the region of California from San Ysidro to Fresno. Chouinard said Tong was a great candidate for placement because he had a long work history before he lost his vision.

“Kevin was an excellent candidate because he had the right attitude from the beginning,” she said. “He wanted to work, which is what you want first, and he wants to be independent.”

Tong is one of seven deaf-blind clients she has placed in regional jobs over the past three months. HKNC has a national partnership with Sodexo, which hires many blind and deaf-blind workers for its food service operations because, Hollingsworth said, the company believes diversity makes for a more well-rounded team in any kitchen.

Tong was initially placed a couple of months ago as an entry-level cook at a mess hall at Camp Pendleton, where he worked in the salad prep area and did basic cooking tasks. But because it took him so long to get to and from work by public transportation, he applied a few weeks ago for an opening at MCRD, which is only 8 miles from his home.

That move last week was also a promotion for Tong, who is now a Level 2 cook, which means he can dice vegetables, measure ingredients and make more complex dishes. Tong’s ultimate goal is to move up to a level 3 cook for Sodexo, where he can do all the tasks in the kitchen, train new employees and even introduce some of his own recipes.

“This is my first time ever working for Sodexo and this will be my lifetime career,” Tong said. “I love the fact that they’re really open to their employees working in different venues, like hospitals and military bases, and they have contacts throughout the world. I’m done. This is my place.”

When he’s not working full time at the base, Tong said he enjoys tending to his collection of finches in an aviary at his home. He dreams of one day owning his own house, traveling the world and competing on a TV cooking contest like “MasterChef.”

“I would also maybe like to start a blog channel called ‘The Deaf Blind Cook,’ where I can inspire other people like me to cook for themselves,” Tong said.