Always ready. Always there. That's the motto of the National Guard, and for 48 days — and counting — soldiers and... 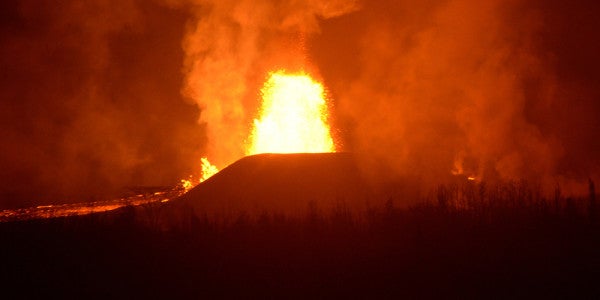 That's the motto of the National Guard, and for 48 days — and counting — soldiers and airmen from this component of the military have been doing safety and relief work amid volcanic threats and destruction on the east side of Hawaii island.

Many of these servicemen and women are volunteers and are from around the state, including some who live on the active volcanoes that make up the Big Island and never imagined they would be responding to a lava eruption disaster in their own community.

“The possibility was always there,” said Hawaii Air National Guard Tech Sgt. Kalani Calles, a 35-year-old Hilo native who grew up understanding that Kilauea is an active volcano and hearing stories from his parents, who lived through eruptions in the 1950s and 1960s. “I didn't think it would quite happen like this.”

Lava erupts from a fissure in the Kilauea region near Hilo, Hawaii, during a night survey flight by UH-60 helicopter crews from the 25th Combat Aviation Brigade on June 2, 2018.Air National Guard/Lt. Col. Wayde Minami

Calles is a facility maintenance worker at the Hawaiian Volcano Observatory at Hawai'i Volcanoes National Park. But after he helped move equipment out of the observatory at the summit of Kilauea following earthquakes and deformation at Halemaumau Crater, Calles said he knew he had to suit up for volunteer Guard duty.

Typically, Guard personnel serve one weekend a month plus two weeks every year for training. Now these soldiers from the Army National Guard and airmen from the Air National Guard are doing civil missions to protect lives and property.

“This is real-world,” said Master Sgt. Christopher Schepers, a Guardsman from Maryland serving as a public information officer on Hawaii island. “There's people's lives at risk.”

Said Calles, “We all came out here to help. It's a tough time, and I feel for the people who are down there.”

On the morning of June 2 inside the Guard's Hilo headquarters at Keaukaha Military Reservation, about 50 soldiers and airmen gathered in an emergency operations command room for a pre-dawn briefing before the start of their 12-hour shift.

The team goes through equipment checks, weather forecasts, road condition updates, safety concerns and the latest lava movement information. The group is told that the Hawaii Police Department reports that lava is 10 meters from a major intersection known as Four Corners. This is the only remaining land evacuation route out for residents of Kapoho near the island's eastern tip.

“Hoooo!” is the response from several in the room.

“Things may get hectic today,” advises one of the briefing leaders, who also notes that the lava flow front is 400 meters wide. “That's what we're dealing with. Just be aware.”

After grabbing a box breakfast of Portuguese sausage, eggs, rice and miniature smoked sausages, the team fans out to their assignments in the field and elsewhere.

Remaining behind in the operations center is a group that includes Calles and several other communications specialists tasked with tracking and guiding personnel in the field in near real time.

Lt. Col. Shawn Tsuha is commanding this group. He's a full-time deputy sheriff at Hilo International Airport. Others in the group include Staff Sgt. Haliaka Moller from Keaukaha, Staff Sgt. Kolina Burton from Kailua-Kona and Master Sgt. Scott Casey from Mililani — all of whom have full-time jobs or family responsibilities outside of the Hawaii National Guard.

Supplementing the volunteers during this lava mission are full-time active-duty Army and Air Force service members who were made available with presidential approval to support the state and county.

These forces have cycled in and out of the lava mission and have included personnel from Guam, Arizona and other places. Some, like Calles, return for multiple cycles of service on the mission.

“It's just my way to try and help and support the people that are down there,” he said.

For Calles his National Guard service is personal because his aunt and uncle were forced to evacuate from the lava threat. They moved in with Calles, his wife and three children in late May because they lived in Kapoho where an evacuation advisory was issued after lava began heading in that direction from a series of ground fissures 8 miles away in the middle of the Leilani Estates subdivision near Pahoa.

“To see what they been going through, it's not easy,” Calles said. “It's tough for them to come to the realization that potentially you could be cut off from your home. It could be destroyed. I see them every night. It's tough for them.”

“The uncertainty is really difficult for the people down there,” Calles continued. “Not knowing what's going to happen. It's tough. It's tough for everyone.”

Calles could not be reached afterward to find out whether the home of his aunt and uncle was spared or destroyed.

A few homes in Kapoho remain.

Now, as lava continues shooting 200 feet into the air and flowing to the ocean at Kapoho through a channel contained only by dikes of cooled lava, the men and women of the National Guard still have jobs to do helping the state and county in its civil defense mission.