The cellphone video shows a baby dangling from a belt or scarf around his neck, eyes “bulging and watering” as... 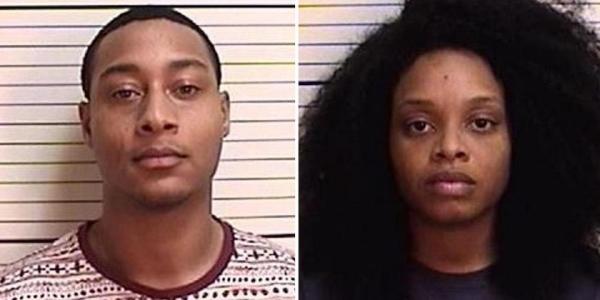 The cellphone video shows a baby dangling from a belt or scarf around his neck, eyes “bulging and watering” as he is held above a bed inside base housing at Naval Submarine Base Kings Bay, according to the Camden County Sheriff's Office arrest report.

The video starts with the now 7-month-old baby gagging as water is poured in his open mouth and elsewhere, and ends with him left alone in the bedroom, his neck still wrapped with the belt or scarf, the report said.

The video is one piece of evidence that led to Sunday's arrest of Jonathan Xavier Harrell, 24, and his wife Latoya Denise Harrell, 23, on charges of cruelty to children in the first degree at their home on Maple Court in the naval base in St. Mary's, Florida, according to the Sheriff's Office report.

The couple's three children, including the baby, were checked by county paramedics. All appeared fine, the Sheriff's Office said.

Georgia's Division of Family and Children Services took them into custody as the investigation continues. The Harrells remain behind bars with no bail set as yet, the Sheriff's Office said.

Kings Bay base officials said Jonathan Harrell is a U.S. Navy sailor stationed at the base, but not assigned to any submarine. They stated they were aware of the incident and are cooperating with the Sheriff's Office in its investigation. The had no other comment.

Deputies were called to the home just after 8 a.m. on a report of a possible domestic situation to find the couple with base police, who said they had an argument, the report said.

A base officer told deputies the husband had told him of a video he had taken of his wife physically abusing their baby, according to the report.

The report said living conditions were “substandard and unhealthy” in the the family's house. There were holes in the walls and almost every door appeared to have been broken or kicked off its hinges, the report said. Dirty diapers and broken glass covered floors, with flies and roaches, plus decomposing food and trash piled in the kitchen, the report said.

Deputies spoke to the husband, who pulled out his cellphone and showed deputies the video he said he had shot of his wife and youngest baby, first saying it was shot six month's earlier, then admitting it was about two months ago, the report said.

The video shows the couple arguing on a bed as the baby lies there as well. The mother pours a full bottle of water on the child, including his open mouth, as he coughs and gags when it goes in his mouth, the Sheriff's Office said. The wife was apparently did that to provoke some reaction from her husband, the report said, but he “does not appear to be alarmed or worried” about his son.

The mother next grabs a belt or scarf and ties it around her son's neck “in a noose-type fashion” and holds him in the air, the report said.

“On the video, the object is so tight that the infant's eyes can be visible as bulging and watering,” the narrative states. “Again, Mr. Harrell does not stop the act nor does he attempt to render aid, yet continues to record.”

The wife drops the baby on the bed and walks out of the bedroom, her husband following as he still records video. The child was left in the bedroom, the belt or scarf still tied around his neck, the report said.

When asked why he shot the video, Harrell told deputies it was to get his wife “in trouble and not lose his family,” and that they were already under investigation by state child services officials, the report said.

When interviewed by deputies, the wife first denied knowledge of the incident, then appeared confused as she said she was only trying to pick him up, the report said. The couple were arrested at the home, the report said.