Air Guard officer in Congress: It’s time for Facebook to crack down on military romance scams

"These crimes result in a variety of consequences, including financial and emotional harm to victims as well as stolen identities and stolen valor for the impersonated service members and veterans" 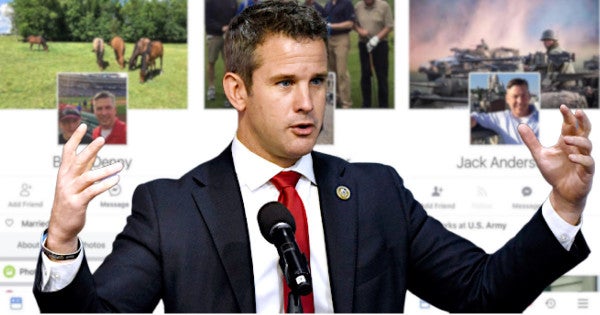 An Illinois congressman in the Air National Guard is pressing Facebook's CEO Mark Zuckerberg to do more to stop “romance scams,” especially since many U.S. service members have become targets of the illicit activity.

In a letter sent to Zuckerberg Wednesday, Rep. Adam Kinzinger, a Republican, said he is “increasingly concerned” by these scams — where Internet users anywhere in the world claim to be veterans and exploit victims for money — that are consistently perpetuated on the social media platform. He asked Zuckerberg to better weed out fake accounts and improve security of the site to that end.

“As a combat veteran currently serving as a lieutenant colonel in the Air National Guard, I am particularly concerned with the pernicious efforts to impersonate current or former military personnel to gain the trust of unsuspecting users and ultimately convince them to transfer money,” Kinzinger said in the letter provided to Military.com.

“These crimes result in a variety of consequences, including financial and emotional harm to victims as well as stolen identities and stolen valor for the impersonated service members and veterans.”

Kinzinger, who wrote that he too has been impersonated for such scams, said the company doesn't always act in the best interest of the user, and has personally reviewed some cases where “no action seems to have been taken at all.”

“My staff and I find various accounts posing as me on Facebook, Twitter, Instagram, Google Hangouts or other platforms,” he said. The congressman said he's been lucky he and his staff are able to find these scammers and report them, but that many Americans do not “have the time or resources to confront these issues.”

Kinzginer's request follows a recent report from the New York Times that explored how vulnerable users have been sending hundreds of thousands of dollars — in some cases, wiping out their life savings — to help desperate service members on a deployment. Or so they thought.

In partnership with FX Channel's documentary-style segment “The Weekly,” New York Times reporter Jack Nicas spoke with victims, grifters, as we well as Pentagon officials on how the fraudulent activity is perpetrated, with 120 million fake users, many posing as troops.

One case ended in tragedy.

The social media company told the Times it continues to rid the site of fake profiles.

“That job is not finished and we are committed to sharing our progress,” Facebook said in a statement.

Kinzinger, who serves as an RC-26 pilot with the Wisconsin Air National Guard's 115th Fighter Wing, is also asking Facebook to answer his questions regarding:

The congressman expects answers by Aug. 14.

“Unfortunately, it seems that Facebook is having significant difficulty stemming the tide of malign activity that has rapidly and persistently permeated the platform,” he said. “I urge you to further expand your efforts on these fronts.”