‘My soldiers can always find me … because I’m about twice as big as the other guys.' 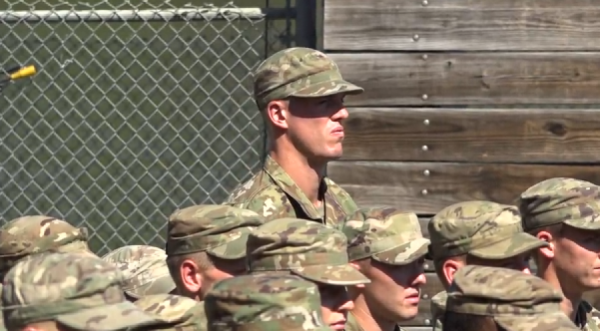 NEW YORK — Marshall Plumlee had been training his platoon for a week through combat scenarios with live ammunition, stumbling and learning until they completed the mission by blowing up a mine-wire obstacle with C-4 explosives.

Plumlee, the former Knicks center, suddenly was hit with the same adrenaline rush he remembered at Duke, or the G League, or the NBA.

“When I was able to help my squad leaders blow up that obstacle, in that moment, it was like the same as dunking on somebody in a basketball game,” Plumlee tells the Daily News. “It was a pretty surreal experience.”

Lt. Plumlee is still only 27, the youngest of three brothers who all played (or still play) in the NBA. But he ditched his basketball career almost two years ago for the U.S. Army, and is already the leader of a roughly 40-person rifle platoon stationed at Fort Lewis in Washington.

It was an opportunity Plumlee knew was coming, having declared his intentions to join the U.S. Military before the NBA draft. He then juggled his duties with the New York National Guard while playing with the Knicks, driving up to its facility in Troy, N.Y., for drills whenever the schedule allowed. Carmelo Anthony called him “Captain America.”

Related: 10 Years After His Death, Here's What Pat Tillman Means To Me

Although Plumlee might’ve never elevated to anything more than a fringe NBA player, he still had opportunities to continue his pro career. Back in October of 2018, he was traded to the Nets’ G-League affiliate in Long Island. But Plumlee never played for the Nets, and doesn’t plan to ever play professional basketball again.

“I enjoyed basketball, I loved playing it at the highest level,” Plumlee says. “But there was still an itch I wanted to scratch on the army side of things. I wanted to do it on a larger capacity. I feel like I learned all these great lessons in teamwork and leadership from some of the teams I’ve been a part of in the NBA, and I felt obligated to share that with the army team. The basketball is going to stop bouncing at some point. And for me, I figured I’d get a jump on it. I know I have something outside of basketball that I’m passionate about, something I love, let’s give this a real shot here and see how far I can go.”

Plumlee, who is from Indiana, is physically unique to the army at 7-feet tall. It has its pluses and minuses. As Plumlee noted, he is easily spotted by his soldiers (although that could also work against him if it’s the enemy who is searching).

“Even in the middle of the night under night vision goggles, my soldiers can always find me,” he says. “They can see which one of the dark blurs is Lt. Plumlee because I’m about twice as big as the other guys.”

But getting inside vehicles or jumping out of planes can be challenging.

“Each jump has been an adventure,” Plumlee says. “To put it mildly.”

Three years ago, Plumlee had just finished up his rookie season with the Knicks. Now he’s on a different team.

“It was a really tough decision to leave basketball and I’ll say people often ask me if I miss it on the army side of things, but I tell them what I loved about basketball was the locker room environment,” Plumlee says. “I loved being part of a team, being part of something bigger than yourself. And in that sense, I haven’t left anything.

“If anything, I’m getting to do that on an even bigger level where the stakes are higher.”