The Pentagon on Wednesday gave the sons of a Korean War soldier their father's dog tag, which was delivered to... 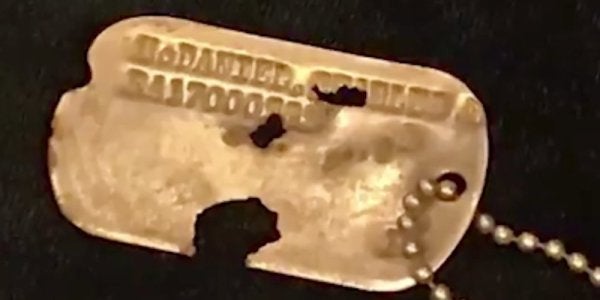 The Pentagon on Wednesday gave the sons of a Korean War soldier their father's dog tag, which was delivered to the U.S. by North Korea, along with 55 sets of remains that potentially belong to other U.S. soldiers killed during the conflict.

North Korea returned the remains as part of an agreement signed by President Donald Trump and North Korean leader Kim Jong Un during a June summit between the two leaders in Singapore.

Charles said he was “overwhelmed” with emotion when he learned his father's dog tag was found and was to be returned to the family.

“I sat there, and I cried for a while and took a while to compose myself,” Charles said. “We're just overwhelmed, I am, that of all of these boxes that came back and out of all of these thousands of people that are , we're the only ones that have certitude.”

This is the dog tag that was returned from North Korea – belonged to army MSGT Charles McDaniel, believed killed in late 1950 pic.twitter.com/SgUPms8rYs

McDaniel's dog tag was the only one returned with the 55 sets of remains, but it does not guarantee Master Sgt. McDaniel's remains are among those repatriated to the US.

The remains are currently being analyzed in a lab in Hawaii, and it will take some time to identify.

Larry, who was too young when his father went off to war to remember him, did a DNA swab test at the end of Wednesday's press conference to help determine if his father's remains were among those returned.

Master Sgt. McDaniel, who was part of the 8th Cavalry Regiment's Medical Company, was reportedly killed in October 1950 amid a surprise attack by Chinese forces.

The Department of Defense estimates that roughly 7,700 US soldiers did not return home when the Korean War ended via an armistice in 1953.