Korean War To End; North And South Agree To Get Rid Of Nukes 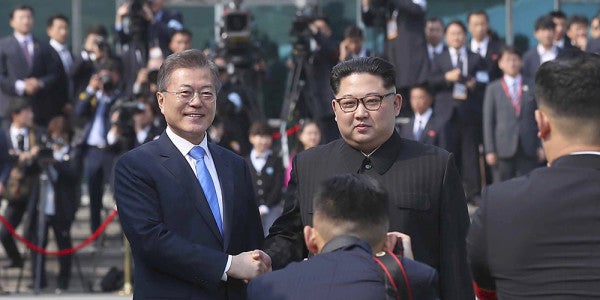 South Korean President Moon Jae-in met with North Korean leader Kim Jong Un on Friday in a historic summit that observers have viewed with both trepidation and optimism.

Friday's summit is the latest development in a fast-moving march toward diplomacy on the Korean Peninsula, following what had been a tumultuous year for the region.

Shaking hands in front of a crowd of journalists and photographers, Kim and Moon made history as they greeted each other in what was the first meeting between leaders of North Korea and South Korea in 11 years.

Kim and Moon paused for photographs at the concrete steps of the military demarcation line before making their way into South Korea's portion of the demilitarized zone. It marked the first time since the end of the Korean War in 1953 that a North Korean leader crossed the border into the South.

The two also stepped across the border into North Korean territory after Moon asked Kim when he would “be able to cross over,” to which Kim replied, “Then shall we cross over now?”

Arriving at the Peace House, a conference building in South Korea's part of the border village of Panmunjom that will host the talks, Kim signed a guest book, writing: “A new history starts now, an age of peace, from the starting point of history.”

Amid a flurry of camera flashes in the Peace House, the two leaders gave brief statements and exchanged pleasantries, while Kim called for “frank” discussions.

“I say this before President Moon and many journalists here that I will hold good discussions with President Moon with a frank, sincere, and honest attitude and make a good outcome,” Kim said, according to South Korea's Yonhap News.

“The moment [Kim] crossed the military demarcation line, Panmunjom became a symbol of peace, not a symbol of division,” he said, according to Yonhap News.

Later in the day, the two leaders planted a commemorative pine tree, using soil and water from mountains and rivers in their respective countries, according to a statement from South Korea's presidential Blue House.

In a joint statement in the afternoon, Moon and Kim agreed to achieve “complete” denuclearization of the Korean Peninsula and work toward officially ending the Korean War with a peace treaty; the war is technically ongoing because it ended in an armistice agreement.

“The two leaders declare before our people of 80 million and the entire world there will be no more war on the Korean Peninsula and a new age of peace has begun,” the joint statement said.

Though the statement was broadly worded, it outlined some plans to address lingering issues between the two nations, including the reunification of families divided during the Korean War and a goal to end the antagonizing propaganda broadcasts at the border.

How the two Koreas got here

The journey to the Peace House has been fraught with uncertainty, particularly after heightened provocations from North Korea last year.

In addition to firing at least 23 missiles in 2017, North Korea put the progress of its nuclear weapons program on full display, testing a miniaturized hydrogen bomb in September.

But amid North Korea's ratcheting up its missile program, US President Donald Trump displayed no qualms about lobbing equally provocative rhetoric back at the North, threatening “fire and fury” and dropping less-than-subtle hints about retaliation from Washington should Pyongyang hit a US target with one of its missiles.

The back-and-forth stoked fears that a conflict on the Korean Peninsula might be inevitable.

And at the beginning of this year, it looked as though Kim was ready to keep the action going. He said in an address on New Year's Day: “The entire United States is within range of our nuclear weapons, and a nuclear button is always on my desk. This is reality, not a threat.”

The North warms up to its neighbors and the US

Kim soon dispatched an envoy of North Korean athletes and performers to the Winter Olympics in Pyeongchang, South Korea, in February. His sister, Kim Yo Jong, also attended and met with Moon during the festivities, delivering a message that helped pave the way for Friday's summit.

North Korea's conciliatory tone has extended beyond its southern neighbor. Following a meeting between South Korean and North Korean intelligence officials in Pyongyang, South Korea delivered a message to the US from Kim: He would like to meet with Trump.

Trump accepted the request, and preparations for a meeting have been underway. Trump, who would be the first sitting US president to meet with a North Korean leader, said the gathering with Kim could happen as early as next month, though the location has not been announced.

In a statement after Moon and Kim's initial meeting, the White House called the summit in South Korea “historic.”

“We wish the Korean people well,” the White House said. “We are hopeful that talks will achieve progress toward a future of peace and prosperity for the entire Korean Peninsula. The United States appreciates the close coordination with our ally, the Republic of Korea, and looks forward to continuing robust discussions in preparation for the planned meeting.”

In March, Kim visited Chinese President Xi Jinping in Beijing, marking Kim's first meeting with a world leader since he assumed power in 2011.

Moon and Kim's meeting has critical implications for the future of the Korean Peninsula.

North Korea had already made some concessions ahead of the summit, including a declaration that it would stop missile and nuclear tests and drop its previous demands for US troops to withdraw from the peninsula.

Among some symbolic gestures, such as formally ending the Korean War, one of Moon's priorities will be to reach a consensus on denuclearization.

“It's going to take a lot of time and negotiation to see how flexible North Korea will be on this question,” Mintaro Oba, a former US State Department diplomat involved in Korean affairs, told Business Insider.

“That should be something to probe for after the summit rather than the summit itself. There's many more meetings, many more talks, to find out common ground and see where there can be flexibility.”