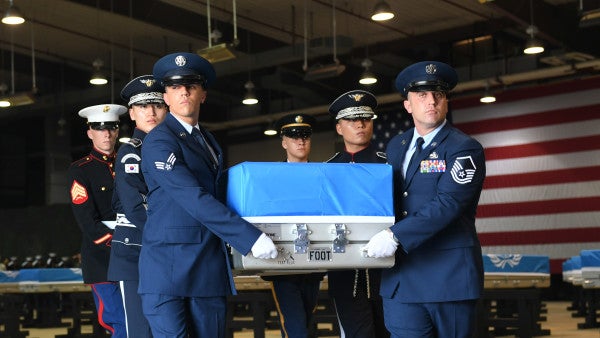 A masked and white-gloved Marine sergeant approached the table in the silent aircraft hangar, where a diminutive casket draped with the United States flag rested on a table. Rows of socially distanced dignitaries stood nearby.

The sergeant saluted and picked up the casket during the solemn honors ceremony at Joint Base Pearl Harbor-Hickam, Hawaii, on Tuesday to complete a transfer in the custody of remains that was 70 years in the making.

The U.S. flag was removed and, under strict protocol, was replaced briefly with the flag of the United Nations Command in South Korea and then the Republic of Korea's flag.

A South Korean soldier, who fought alongside U.S. troops in the 1950-53 Korean War, was at last going home to the “Land of the Morning Calm,” and to a welcoming ceremony in Seoul on Wednesday led by President Moon Jae-in, the son of North Korean refugees.

The casket was the last of a total of 147 placed aboard a waiting Republic of Korea Air Force A330 Airbus for the journey home in what the Defense POW/MIA Accounting Agency (DPAA) called the largest ever transfer of repatriation remains from the U.S. to South Korea.

DPAA forensics teams have determined that all the remains are Korean. At least seven sets of the remains have thus far been identified through lab analysis to be returned to their families in South Korea, according to the DPAA.

The remains “represent the ultimate measure of full devotion and sacrifice to their nation in the Korean war, believing that, without their country, their existence would have been meaningless,” Army Col. Chul Kim, chaplain of U.S. Army Pacific, said in his invocation, spoken first in Korean and then in English.

“Let their valor become a seed for enduring peace and prosperity of the Republic of Korea,” he said at the ceremony, where attendance was limited to officials and honor guards because of the COVID-19 pandemic.

In his remarks, Rear Adm. Darius Banaji, deputy director of operations at the DPAA, said the 147 repatriations were enabled through close cooperation with South Korea's Ministry of National Defense Agency for KIA Recovery.

“We look forward to many more events like this in the future,” Banaji said, although there have been no more recoveries since North Korea transferred 52 boxes of commingled remains to the U.S. in August 2018, following the Singapore summit between President Donald Trump and North Korean leader Kim Jong Un that June.

According to the DPAA, a total of 62 U.S. service members have thus far been identified from the boxes of remains returned by North Korea in 2018.

More than 7,500 Americans are still listed as missing from the Korean conflict, and about 5,300 of those are believed to have died on battlefields or in prison camps in North Korea.

Some of the remains transferred Tuesday were from the boxes of remains returned by North Korea in 2018, while others recently identified as South Korean were from previous recovery efforts dating back 30 years, according to the DPAA.

At the Pearl Harbor ceremony, Jae Min Park, South Korea's vice minister of defense, noted that it has been “seven decades since the Republic of Korea and the United States fought hand-in-hand as allies.”

He said it was especially fitting to return “the remains of our heroes to the nation for which they gave their lives on the eve of the 70th anniversary [June 25] of the Korean War.”

Park pledged that the U.S. and South Korea would continue to work together “to bring every last one home” from the ranks of American and ROK service members still listed as missing from the conflict.

In his keynote address, Adm. Phil Davidson, head of U.S. Indo-Pacific Command, said the fallen from the Korean War contributed to a solid and enduring partnership between the U.S. and South Korea, which has brought security and stability to the region.

“Our missing and unaccounted for service members are entitled to one certainty — that they will never be forgotten,” he said. “The conflict in which South Koreans and Americans fought bravely side-by-side to defend the values and bodies embodied in the established rules-based international order, which was then in its very infancy … [brought] peace and prosperity to the globe.”

He concluded by saying “Katchi Kashida,” the motto of U.S. and South Korean forces on the peninsula, meaning “We Go Together.”