68 years after disappearing during the Korean War, this soldier is finally home

"Even though I don't know him personally, he's still my brother that I'm bringing home." 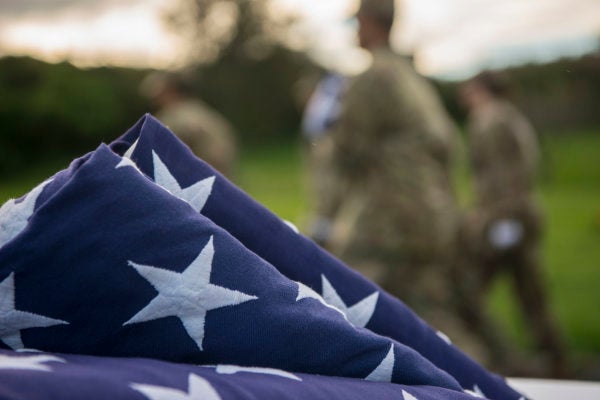 The former Traverse City resident's remains arrived at Cherry Capital Airport Thursday afternoon, 68 years after he disappeared in a Korean War battle. A parade of police vehicles and veterans on motorcycles rolled with the hearse, taking Lawler on his second-to-last trip to Covell Funeral Home where a military honor guard awaited.

People came out to pay tribute that hot afternoon to the First Cavalry Division member who disappeared in a Nov. 2, 1950, battle near Unsan in North Korea, according to his obituary and Department of Defense information.

His last ride Saturday will take him to a burial plot next to his mother, Elsie Otto, said Robert Wagner, husband of Lawler's sister Beverly. Lawler was very close with his mother, Wagner said.

“That's where Chuck's getting buried, right next to his mother, right where he should be,” he said.

Lawler's burial will close an excruciating chapter for his family, Wagner said. His mother always held out hope that he had been captured and not killed or missing. One of Lawler's friends was a part of a battalion situated behind Lawler's. The enemy hit his position hard and he was wounded in the legs. He all but knew Lawler hadn't survived.

The Army listed Lawler as dead in 1953 and the family received a Purple Heart in his honor, Wagner said.

It took a presidential visit abroad and some laboratory detective work to bring Lawler home.

That number became a name thanks to a DNA hit and other tests at the Defense POW/MIA Accounting Agency's laboratory in Hawaii, Taylor said. North Korean officials also reported finding the remains near Lawler's last known location.

Beverly Wagner and her siblings — all of whom have since passed away — submitted DNA samples some years back after reading about Lawler online, Wagner said.

Then, Robert Wagner got a call in May from someone asking for his wife. He handed off the phone, and her exclamation of “Really!” brought Lawler to mind.

Another Army Corporal whose remains were part of the 55 has come home, too — KSAT reports Cpl. Billy Joe Butler will be buried Friday in Kerrville, Texas. He died in a North Korean prisoner of war camp in January 1951.

Lawler disappeared during a dark time of the Korean War, a conflict that killed millions and left the Korean peninsula divided to this day.

U.S. and South Korean forces pushed North Korean troops north to the Chinese border by October 1950, months after North Koreans had overrun much of South Korea, according to the U.S. Army Center of Military History.

Chinese soldiers launched “human wave” attacks near Unsan — between the North Korean capital Pyongyang and the Chinese border — on Nov. 1, 1950, according to the Center of Military History. The First Cavalry Division's Eighth Regiment, of which Lawler was part, lost more than 800 men after Chinese soldiers encircled them.

The Chinese pushed U.S. and South Korean troops out of North Korea by December, according to Center of Military History. The resulting border stalemate ended in July 1953 with an armistice but not an official end.

Robert Wagner said he and Beverly are glad they could see closure and bring home a hero whose life was cut so short.

“He never got a chance to marry or have his own kids or nothing, really,” he said. “Nineteen years old and his life was gone.”

Lawler lived in Traverse City with his mother and stepfather as a teen, according to his obituary.

Beverly Wagner was young when he died, and she remembers him chiding her to get to school unless she wanted the truancy officer coming for her, Robert Wagner said.

Army Sgt. Courtney Brown escorted Lawler's casket to Traverse City from Hawaii, where the Compton, Calif., native was stationed, she said. She volunteered for the task and called it the most honorable and memorable experience of her seven years serving.

“Even though I don't know him personally, he's still my brother that I'm bringing home,” she said.

Brown was also heartened to see those who came to pay their respects, she said.

Angela Gingras and wife Terry Taylor were among them. The Old Mission Peninsula couple stood near the funeral home and waved flags, Taylor wiping away tears as the motorcade passed.

Both had fathers who served in World War II, and Gingras' dad also served in the Korean War, she said. They thought they should come and pay tribute to a hero, Gingras said.

“If that was our family, we certainly would appreciate that also,” she said.

Tom Whilden of American Legion Riders Post 35 was one of dozens of bikers to follow Lawler's hearse, and his group was one of several whose members rode along, including Rolling Thunder and Patriot Guard.

Whilden and others will be back Saturday, he said. He tapped his heart when asked what taking part on Thursday meant to him.

“Right there, very moving,” he said.

Robert Wagner said he and his wife appreciate everything that's been done for them. It's been an overwhelming time, and the two originally didn't want to publicize Lawler's return.

He asks those who come Saturday to be respectful and remember that they came to honor a hero.

“So many people who served in war lost their lives,” he said. “It's something for people to be proud of that fought for the rights that we have in this country.”