Pvt. Howard K. Collins has been awaiting a Purple Heart for 66 years, since he came back home to West... 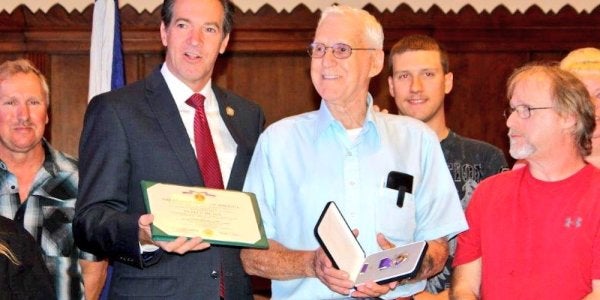 Pvt. Howard K. Collins has been awaiting a Purple Heart for 66 years, since he came back home to West Virginia after serving in the Korean War.

The waiting finally came to an end Saturday as he received the honor among his family and closest friends.

A quiet man, with small round glasses perched upon his nose and a tattoo on his left arm, sat in the front row of the chapel at the Beckley VA Medical Center as the Color Guard presented the colors and the national anthem was sung.

The man, Collins, was finally about to receive his long-awaited Purple Heart after serving in the Army in the Korean War.

He had been shot and wounded by an enemy soldier. The bullet grazed his head.

“We are so blessed and so honored to be surrounded by veterans like you, Mr. Collins,” Vasquez said.

Four of Collins’ sons attended. His fifth son was not there, but the family said he was there in memory. His wife, whom he called “Lou,” passed away in 2015, but he said she was also there with him.

He commented on President Donald Trump’s recent visit to Singapore, where he said an agreement was made to recover the bodies of U.S. soldiers who fought in the Korean War.

“There were 164 West Virginia souls that never came home from the Korean War,” Jenkins said. “Eight of those souls were from Raleigh County.

“We need to bring our heroes home. Families have waited too long, and we need peace.”

However, Collins was one of the lucky ones to come home, he said.

After returning home from the Korean War, Collins began working in the timber industry. He soon then became a coal miner, highlighting his West Virginia roots.

As Collins received his recognition from Vasquez and Jenkins, he slowly arose from this chair to face the crowd. He remained humble, but said this was “really something special.”

“It feels good, let me tell you,” Collins said with a grin. “I’ve been trying so long to receive this, and it’s just such a good feeling.”

Collins said he was blessed to be able to return to his home in Raleigh County after he served in the Korean War, and it was an honor to be able to accept such a high recognition in front of his family and friends.

“I want you to remember something though,” he said. “This is not only an honor to me, the man, but this is an honor to the country. That’s important.”