What We Know About KSSO, The 2,000-Strong Russian ‘Delta Force’ Training For War

Incorporating lessons from Western special operations forces, the Russian military has established its own equivalent of the U.S. Army’s elite 1st Special... 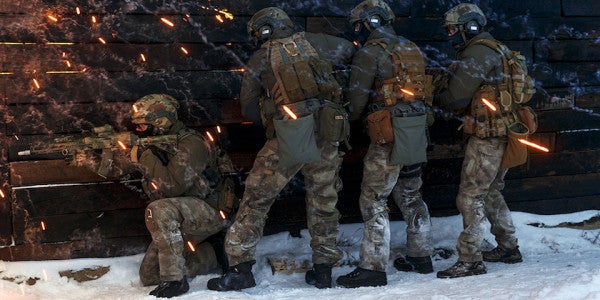 The Russian General Staff first announced the creation of this command in March 2013. Though it is relatively young, the new force have been quick learners and has accumulated a fairly significant amount of combat experience during its short existence. Indeed, while the KSSO is likely not as lavishly funded as Delta or the U.S. Navy’s elite DEVGRU (better known as SEAL Team Six), the Russian unit has performed well.

Like Britain’s elite Special Air Service regiment—which Col. Charlie Beckwith based the Delta Force on when he created the unit—KSSO does not have many of the expensive hardware and support infrastructure that its American counterpart does. “Undoubtedly they do not have the money for specialized helicopters or airlift,” said Mike Kofman at the Center for Naval Analyses during a interview with The National Interest—referring to the American Joint Special Operations Command’s (JSOC) fleet of highly modified MH-60 Black Hawk helicopters that participated in the 2011 raid that eliminated Osama Bin Laden in Pakistan. “But somehow SOF has been getting the job done long before many of those gadgets came along.”

KSSO has seen some remarkable successes—the most visible of those was Moscow’s seizure of the Crimean Peninsula from Ukraine in 2014. “The KSSO's first combat deployment was the rather memorable annexation of Crimea, particularly the initial seizure of the Crimean parliament,” Kofman toldThe Cipher Brief. “This operation spawned the moniker ‘polite people’ by which Russian special forces have come to be referenced in popular culture.”

The elite unit has also fought during Russia’s intervention in Syria. “In September 2015, the KSSO moved on to Syria, where it has taken on an increasingly visible role in support of Russian combat operations,” Kofman told The Cipher Brief. “There, the KSSO has been involved in missions ranging from recovering the flight recorder of Russia's downed Su-24M navigator back in November 2015, to reconnoitering targets for cruise missile strikes, disruption behind enemy lines through ambushes, high value targeted killing, and retaliation strikes against select groups of fighters. Four KSSO operators are known to have been killed, including two specializing in coordinating strikes with the air force, which gives some indication of their tasks. One the whole, it seems KSSO played a crucial role in the battle for Palmyra in Spring 2016 and was quite active in supporting the Syrian push for Aleppo last Fall.”

Nonetheless, the 2000-man strong KSSO—which perhaps bears more than a passing resemblance to Delta’s parent command JSOC—is still a work in progress and Russia continues to build up its capabilities. The unit is part of a much larger community of special designation forces in Russia, known as Spetsnaz, and special operations outfits that belong to intelligence agencies like the FSB. According to Kofman, Spetsnaz units exist among Russia's land forces, naval infantry, and airborne brigades, with a community that is likely 9,000-10,500 men strong.

“The KSSO is a relatively new addition to the Russian toolkit. The command's core philosophy is training a cohesive team rather than individual fighters,” Kofman told The Cipher Brief. “There are five skills in which individual detachments specialize, but all train to establish basic competency, these include parachuting, mountaineering, diving, urban warfare, and protection of senior military officials in combat zones. Another focus for Russia's special forces is sniper training, where they invested heavily in both personnel and kit. This force also has its own aviation command assigned to it, organic combat support functions, and is expected to act independently of the rest of the military. Today, these include rotary wing aviation based in Torzhok and an airlift element on standby in Tver.”

KSSO—along with the rest of Russia’s special operations forces—will only grow more capable as they gain experience and integrate additional capabilities. Undoubtedly, the Russian special operators could be some of the most formidable adversaries that might one-day challenge American forces.