Jared Kushner denies ever talking about his security clearance with Trump

Donald Trump's son-in-law and White House adviser Jared Kushner denied that he spoke with the president about his security clearance. 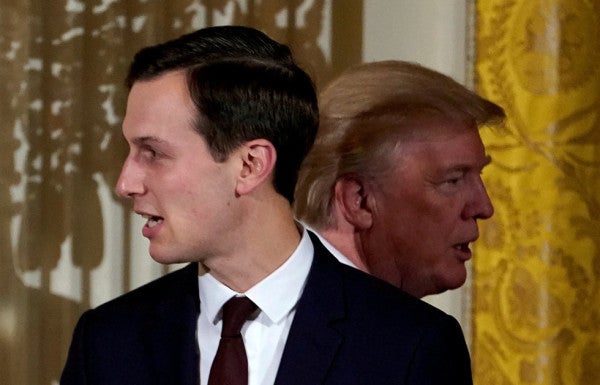 WASHINGTON (Reuters) – Donald Trump's son-in-law and White House adviser Jared Kushner denied that he spoke with the president about his security clearance, according to an interview with the Axios news outlet that comes amid a congressional investigation of the issue.

“I have not discussed it with him,” Kushner told “Axios on HBO” on Sunday when asked if he had talked about his clearance with Trump.

In February, the New York Times cited sources saying Trump had ordered Kushner be given top-secret clearance, despite qualms by some officials.

A House of Representatives committee is investigating whether some staffers in Trump's White House received high-level security clearances over the objections of career officials. Those staffers include Kushner and his wife, Ivanka Trump, congressional sources have told Reuters.

Representatives of the House Oversight committee had no immediate comment on Kushner's remarks.

Kushner separately told Axios in the interview, taped May 20, that he was unsure if he would report contact by Russia or another hostile foreign power ahead of the 2020 presidential election in which Trump is seeking re-election.

Security clearance holders' contact with foreigners is scrutinized in an effort to avoid foreign influence that could pose a security risk.

Kushner's attendance at a 2016 meeting at Trump Tower with Russians offering to help Trump's campaign was examined as part of the U.S. Special Counsel's Office investigation into Moscow's meddling in U.S. politics. Kushner was not charged by Special Counsel Robert Mueller.

Asked if he would call the FBI if it happened again, Kushner told Axios: “I don't know. It's hard to do hypotheticals,” calling the Trump Tower meeting “a clown show” that did not produce “anything that was salacious.”

U.S. Senator Mark Warner, the top Democrat on the Senate Intelligence committee, which is also investigating Russian interference in the 2016 election, said Kushner's comments raise questions about his trustworthiness.

“If a foreign adversary offers assistance to your campaign, you have a moral obligation to call the FBI. If Mr. Kushner and others can't be trusted to do the right thing, then we need legislation requiring it,” Warner tweeted.

Mueller last week issued a stark warning about foreign interference in the 2016 U.S. election following his two-year probe, saying it “deserved the attention of every American.”

Democrats, who control the House of Representatives, are pursuing several investigations into Trump, his administration, his family and his businesses.

In April, the Democratic chairman of the House Oversight Committee released a letter to the White House outlining a whistleblower's allegations raising questions about how security clearances were granted to some Trump aides. [nL1N21J0JY]

The White House had initially refused to cooperate with the Oversight panel's clearance probe but later allowed the former head of the White House office for security clearance to provide limited testimony to congressional investigators.

A congressional aide said the official, Carl Kline, confirmed he had loosened rules over the objection of career security staff.

Ivanka Trump, the Republican president's elder daughter, told ABC News in a February interview that she and Kushner did not receive special treatment regarding their clearances. Kushner previously told Fox News he had complied with all government ethics rules when taking on the White House job following Trump's 2016 election victory.