People in Laguna Beach, California are complaining the American flag on its cop cars is ‘very aggressive’

A decision to affix an American flag graphic to the side of freshly painted Laguna Beach police cars is dividing residents who are alternately praising the image as patriotic or panning it as too aggressive. 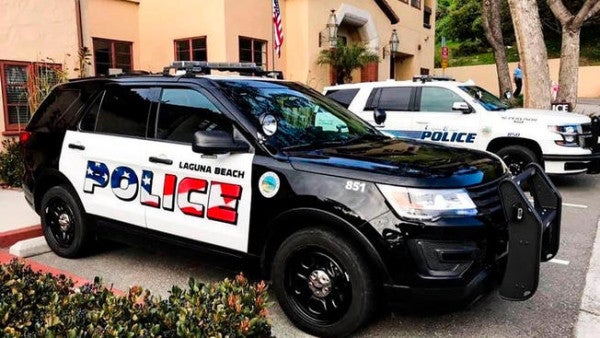 A decision to affix an American flag graphic to the side of freshly painted Laguna Beach police cars is dividing residents who are alternately praising the image as patriotic or panning it as too aggressive.

After hearing criticism from residents at recent council meetings, and acknowledging that the image they approved for the cars didn't quite match the final results, officials agreed to reconsider their February decision to paint the Laguna Beach Police Department's fleet of 11 squad cars. The City Council will take the issue up again at its Tuesday meeting.

“People are screaming that the American flag on a police car is somehow or another … hurting people's feelings who might be immigrants or visitors,” said Councilman Peter Blake. “People are actually ridiculous enough to bring up comments about our cop cars having American flags on them.”

Artist Carrie Woodburn went to the podium at the March 19 council meeting and said it was “shocking to see the boldness of the design” when the newly painted Ford Explorers rolled out.

“We have such an amazing community of artists here, and I thought the aesthetic didn't really represent our community,” Woodburn said. “It feels very aggressive.”

Attorney Jennifer Welsh Zeiter said at the last council meeting that she found the police cars “exceptional” and questioned the loyalty of anyone who objected to the American flag display.

“They are so filled with hatred toward this … office of the president of the United States and the current occupant of that office, that they cannot see through their current biases to realize that a police vehicle with the American flag is the ultimate American expression,” she said.

The council agreed in February to repaint its all-white squad cars in black and white with the image of Old Glory running through the word “police” on the doors.

But the graphic element of the paint job didn't scream Laguna Beach to everyone. Local designer Chris Prelitz was dining with his wife at the Montage when he spotted several parents and small children scattering.

“There was like a little panic going on, and I was like, 'What's happening?' ” Prelitz said, spotting a cluster of police cars. “When one of them's there, it works. But all of a sudden, I saw, wow, when there are three, maybe four of them together, folks thought it was a SWAT team, federal agents. So it had a very striking, strong impact, so much so that I think there might be some unintended consequences.”

On Tuesday the council will decide whether to continue with the logo or choose an alternative. The cars, however, will remain black and white, City Manager John Pietig said.

The proposed graphic that the council unanimously approved in February was a more muted version of the actual graphic that now appears on the cars, according to a city staff report. In February, Pietig called the proposed designs a “cloud-like look.”

He said two weeks ago that the council would reconsider the logo “out of an abundance of caution to address questions that have been raised about the process.”

Out of the Police Department's 11 vehicles, only four await the design update, police Sgt. Jim Cota said in a text message.

“This is about safety. I want anybody to see it, period,” Mayor Pro Tem Steve Dicterow said at the February meeting.

The last time Laguna Beach's police cars featured black paint was in the 1970s, according to the department Twitter's page.

The issue returns to the council on Tuesday at 6 p.m. in the City Council Chambers at 505 Forest Ave.